5 new perpetual calendar watches that channel the romance of time

Before there were clocks, sundials, or constellations, there were calendars, and as the earliest horological device, it enabled people to finally keep track of time. As luck would’ve had it, the concept of time however, isn’t as simple as 31 24-hour cycles per month and 365 days a year, which really complicates things when translated mechanically.

Style
How perpetual calendars channel the romance of ‘forever’ in watches

To counter the inconsistencies of time, watchmakers set about more advanced complications, of which their most prized result is the perpetual calendar. Armed with a mechanical memory that will enable the indication of the correct date for a century according to the Gregorian calendar, the perpetual calendar has the ability to take into the account leap years without requiring manual correction, with the only exception occurring when the secular year is divisible by 400. In simpler terms, the next adjustment required is in year 2100.

As one of the most classical complications ever created, the perpetual calendar tells a comprehensive tale of time, indicating not only the hours and minutes, but also the day, date, month, moon phase and leap year. Any other complication included is a bonus — and also a show off. Here are five that you should look into owning this year. Bvlgari and Piaget might’ve gone head to head in the quest for the thinnest mechanical watches, but Audemars Piguet takes the crown this year with the world’s thinnest automatic perpetual calendar wristwatch.

Made with specifications of the RD#2 concept watch unveiled last year, the 41mm timepiece is a very modern interpretation of its iconic Royal Oak. It’s an engineering marvel; the case’s total thickness sits sleekly at just 6.3mm and the movement at 2.9mm, both achieved by merging the perpetual calendar functions into one single layer instead of the usual three. Its dial sees significant changes too, with a blue satin dial replacing the traditional “Grande Tapisserie” pattern for legibility, and larger day, date and month subdials. 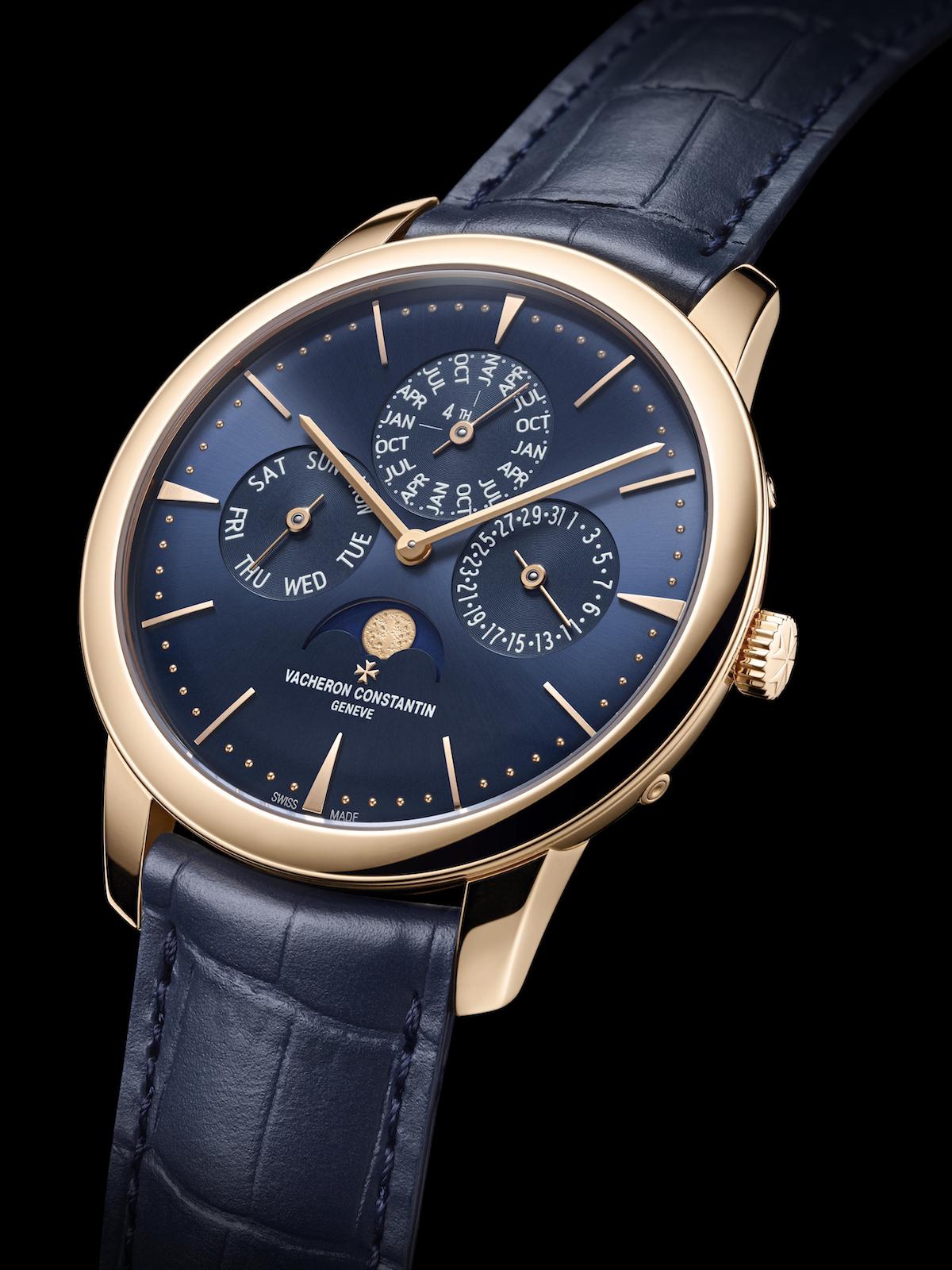 Now rendered in a blue dial after eight years of being in the collection, the fourth iteration of Vacheron Constantin’s emblematic model is still as slender as ever, only now elegantly paired with 5N pink gold for a dressier effect.

The watch still remains to be one of the most sophisticated takes on the complication in the market today, with four neatly spaced subdials amidst a midnight blue sunburst satin finished dial and a “pearl” minute-track. Inside, the self-manufactured calibre 1120QP measures at only 4.05mm in height, lending incredible wearability to the classically-shaped perpetual calendar watch. 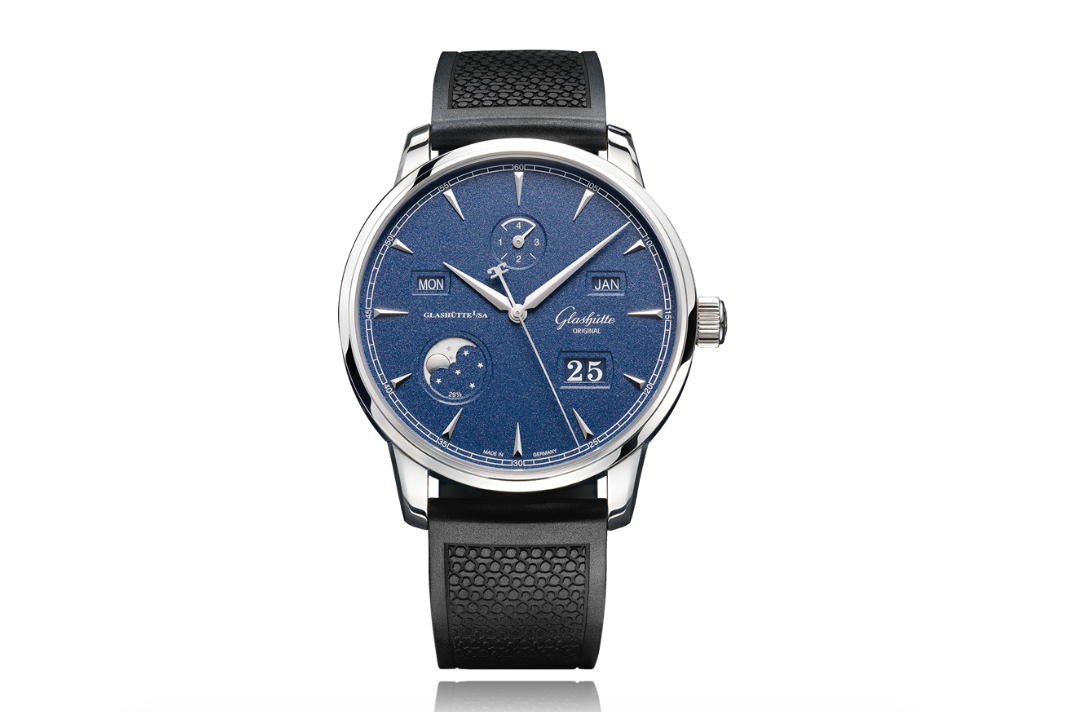 Glashütte joins the likes of the Breguet Marine and Oris Chronograph this year by teaming up with well-known Swiss retailer Bucherer for yet another blue-tinged timepiece. On the surface, the Senator’s typical silvery-white dial, Roman numerals, and blued hands are replaced with a “Bucherer Blue” grained surface, metallic applied markers and rhodium-plated hands — each lending modern edge to the timepiece. The fourth model to mark the 25th anniversary of Lange 1 is also its most complicated and unsurprisingly, exclusive. Still, this little celebration isn’t anywhere near as loud as it deserves to be. Instead, A. Lange and Söhne have managed to keep the details subtle for an extremely sophisticated watch.

Here, all the attributes of the 1994 iteration are kept, especially its asymmetrical hours, minutes and small seconds subdials. The off-kilter perfection is cemented by the emblematic oversized date window. Still, as with every perpetual calendar timepiece, there’s a lot going on within the deceptively simple watch. The moon phase sits interestingly within the small seconds subdial, the month wraps around the dial’s periphery, and the leap year is displayed at six o’clock. Finally, a retrograde day indication completes the watch’s haute horologerie pedigree. Inside, the self-winding movement is regulated by a tourbillon, lending immense accuracy to the classic. 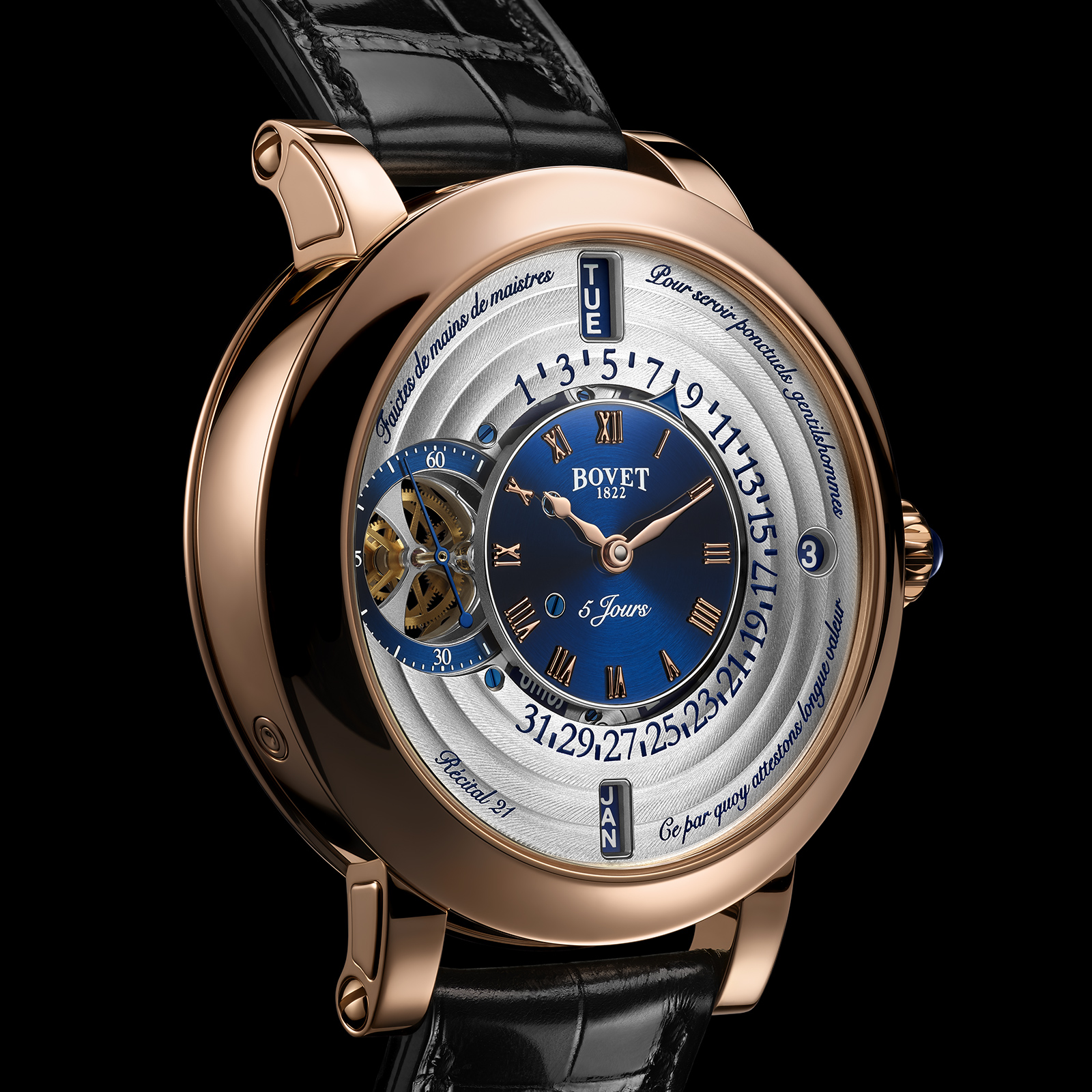 Perpetual calendar watches are known to follow a template when it comes to presenting all the necessary information, but Bovet has managed to cut through the clutter with its take of the haute complication. The 44mm timepiece sees an unconventional layout of all the features, starting with a blue lacquered disk for the hours and minutes. Around its periphery is a retrograde display of the date, and to its left, a skeletonised subdial that doubles as a home for the running seconds. The leap year, month, and day indications sit at windows at three, six, and 12 o’clock respectively.

In true Bovet fashion, the rest of the dial is a rhodium-plated plate decorated with a circular Côtes de Genève pattern, and helmed by a French phrase which loosely translates to “Made by master craftsmen — to serve punctual gentlemen — we certify lasting value.”

Style Watches Luxury Timepieces perpetual calendar watches
Shatricia Nair
Managing Editor
Shatricia Nair is a motoring, watches, and wellness writer who is perpetually knee-deep in the world of V8s, tourbillons, and the latest fitness trends. She is fuelled by peanut butter and three cups of coffee a day.
Motoring Wellness Watches Beauty Style