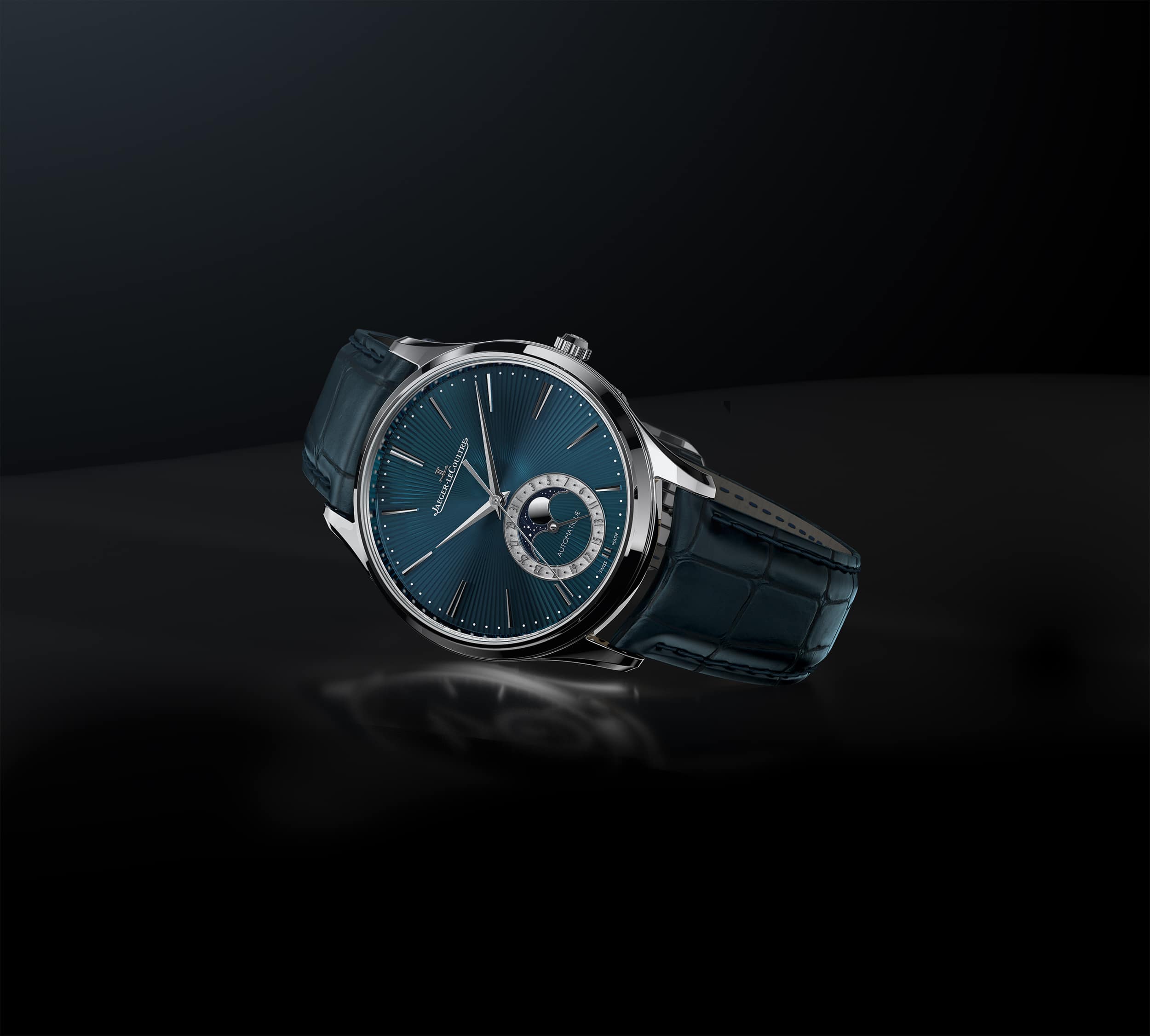 The enamelled watches redefining the art of dial craftsmanship today

All watches start as a clean disc of raw metal, and how much the watch costs at the end of its journey has just as much to do with the dial’s decorative techniques as much as the mechanics that lie beneath. Of all the artisanal ways a watchmaker can spruce up a watch with, enamelling remains one of the most challenging and costly techniques, making these enamelled watches all the more precious as works of art.

While they merely look like miniature paintings, enamelled dials are in fact extremely volatile to flaws. The basic process requires the fusing of soft glass (such as silica) onto a metal substrate in a furnace.

Style
Pre-SIHH 2019: The watches you’ll want to keep an eye on next year

Even though the last two are techniques that typically require days to execute, grand feu enamelling remains a more celebrated expression of haute horlogerie because of the painstaking efforts taken to protect its fragility. Factors such as weather fluctuations or the wrong temperature of the oven can cause the dial to blemish; up to three quarters are discarded during the manufacturing process.

Yet it’s radiant sheen and flawless texture is why watchmakers still invest time and effort into enamelling. Here are some of the finest enamelled watches today. 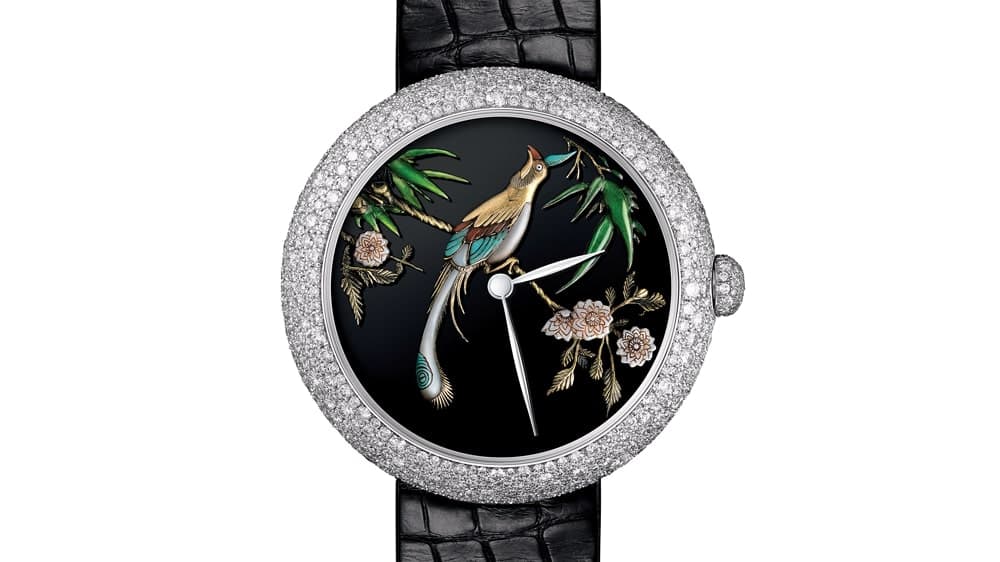 Anita Porchet isn’t only a master enamelist, she’s also one of the world’s most respected artisans in watchmaking. Which is why Chanel has approached her to recreate its founder’s beloved Chinese Coromandel screens onto its Mademoiselle Privé watches.

After studying the 32 Coromandel screens — that now resides in Coco Chanel’s private apartment above the flagship boutique and workshops in 31 Rue Cambon — Porchet carefully translated the vibrant engraved scenes of birds, mythical imagery, and a myriad of fauna over an ornate black enamelled panel with grand feu enamelling. 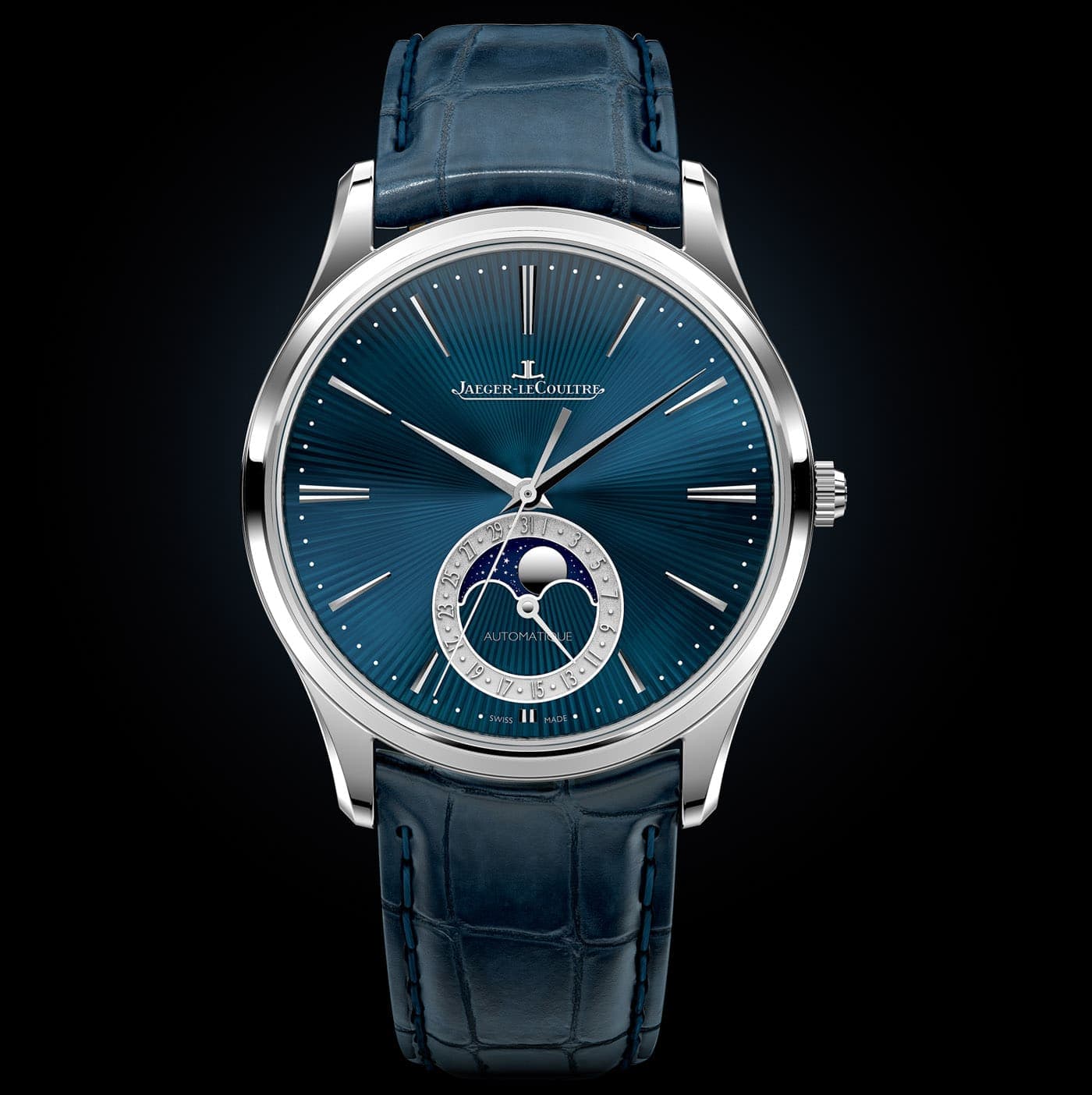 Set deep within the recesses of the Maison’s storied headquarters is the Rare Handcrafts department, which has for generations kept the prestigious art of in-house craftsmanship alive. The Jaeger-LeCoultre Master Ultra Thin Moon Enamel sees a blue guilloche enamel dial, each of the 100 pieces giving a unique saturated three-dimensional glow that is hallmark of one of watchmaking’s most revered art. A 39mm white gold case encompasses timepiece, which also houses a dimensional moon phase indication within a date subdial. 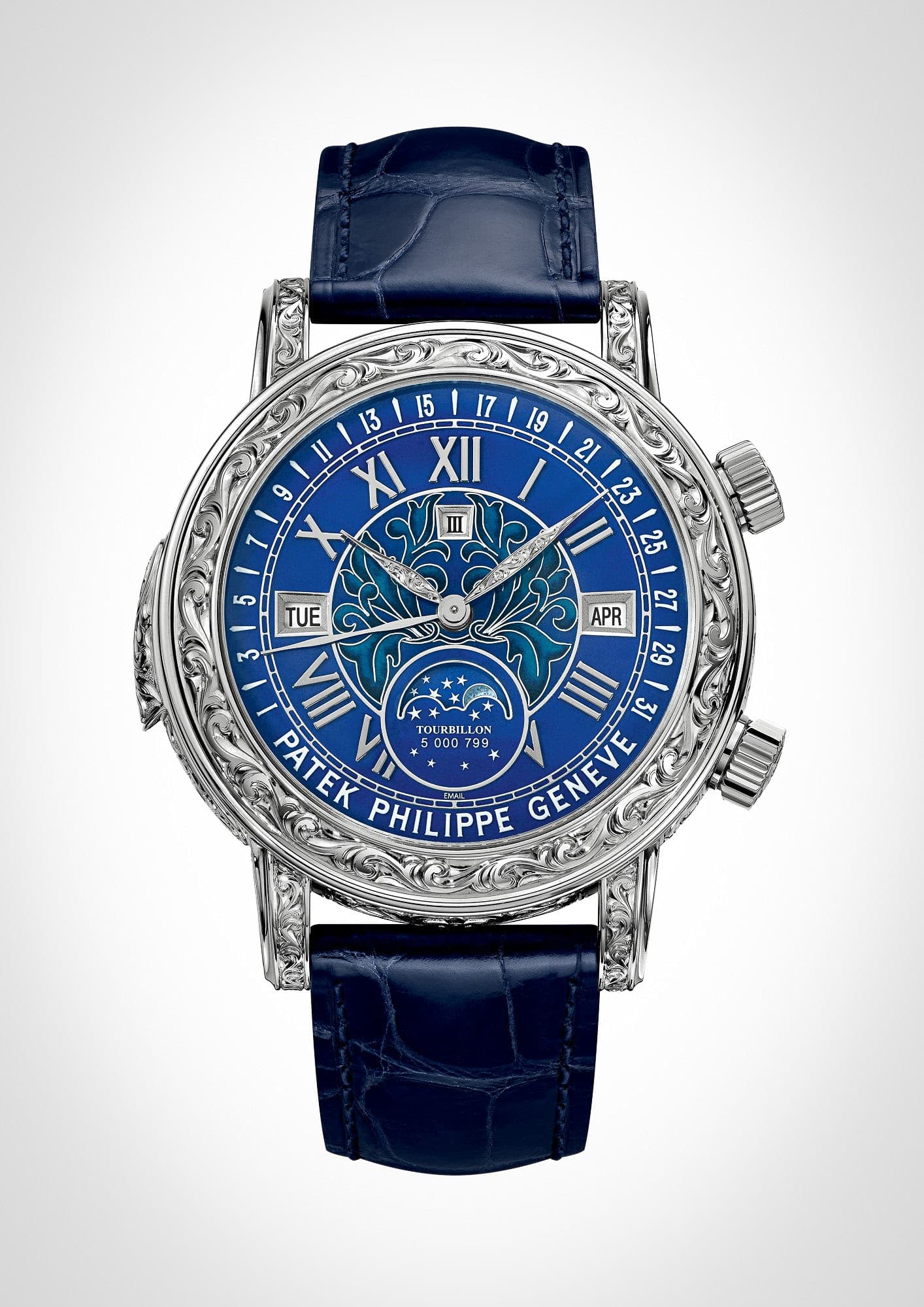 Patek Philippe calls it “a sculpture for the wrist”, and it’s easy to see why. A impressively massive hand-carved white gold case aside, its dial is a work of art, especially when it unites the skills of specialists who have mastered the spectacular art of enamelling. Here, champlevé and cloisonné techniques are used, with the former creating a crisp railway track scale, apertures, and moon-phase display that stand out in relief. A champlevé enameler then fills molten enamel into even the smallest recesses by hand and then fired in the oven.

At the center of the dial, a cloisonné enameler takes over to create the smooth contours of the fauna with fine gold wires that are later filled with shades of blue enamel. As if that’s not enough, the lunar disk is another example of champlevé, complete with white grey and black enamel to emulate its tricky cratered surface. 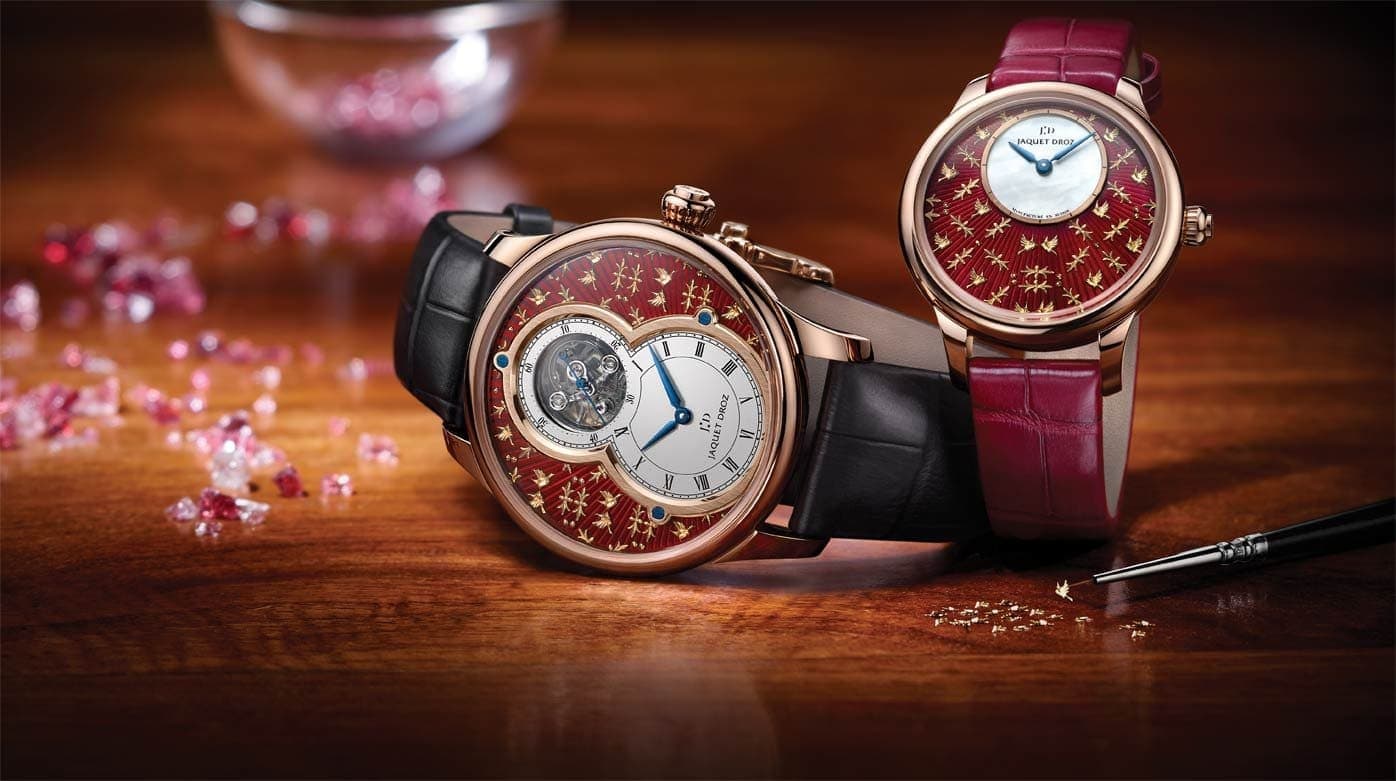 Meanwhile at Jaquet Droz, the craftsmen in its Ateliers d’Art department are still very much focused on the art of paillonné enamelling. Passed down by goldsmiths from the Renaissance era, this decorative technique is now a rare skill that sees fragile gold elements being applied individually on a grand feu enamelled dial. The kaleidoscopic pattern is then fixed in place with a layer of translucent enamel, a delicate play on fire and colour that can only be achieved with decades of experience.

Set against a deep, rich palette of red or blue, the Petite Heure Minute is beautifully finished with the brilliance of the paillons and the mesmerising display of a tourbillon, which is housed within the seconds subdial. 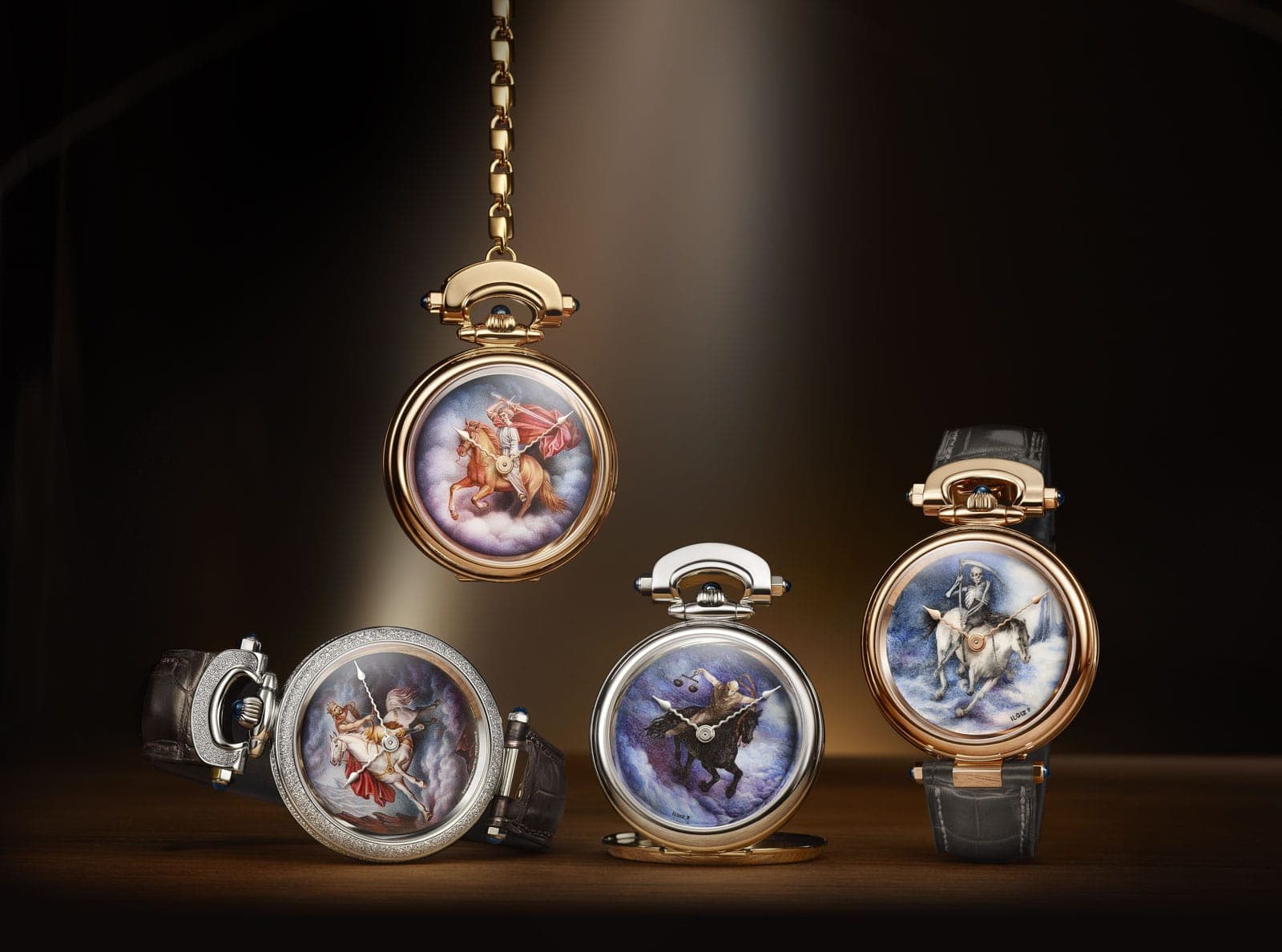 The art of miniature painting has always been taken seriously at Bovet, especially since its legacy dates back to the 19th century when its highly decorated pocket watches were made specifically for the Emperors of China.

Here, Bovet takes the remarkable technique to the next level by employing jewellery and enamel artist Ilgiz F. To hand paint — in full detail, no less — the Four Horsemen of the Apocalypse on an 18K gold base plate. The enamelled dial can only be accomplished with paintbrushes made from the hair of a marten; none on the market are fine enough for this art. Then there are other obstacles such as the search for the right colour, and the careful firing of the lacquered disks to ensure the result is a flawless masterpiece worthy of the most discerning wrists.

Luxury Timepieces enamelled watches Watch craftmanship
Shatricia Nair
Senior Writer
Shatricia Nair is a motoring, watches, and wellness writer who is perpetually knee-deep in the world of V8s, tourbillons, and the latest fitness trends. She is fuelled by peanut butter and three cups of coffee a day.
Motoring Wellness Watches