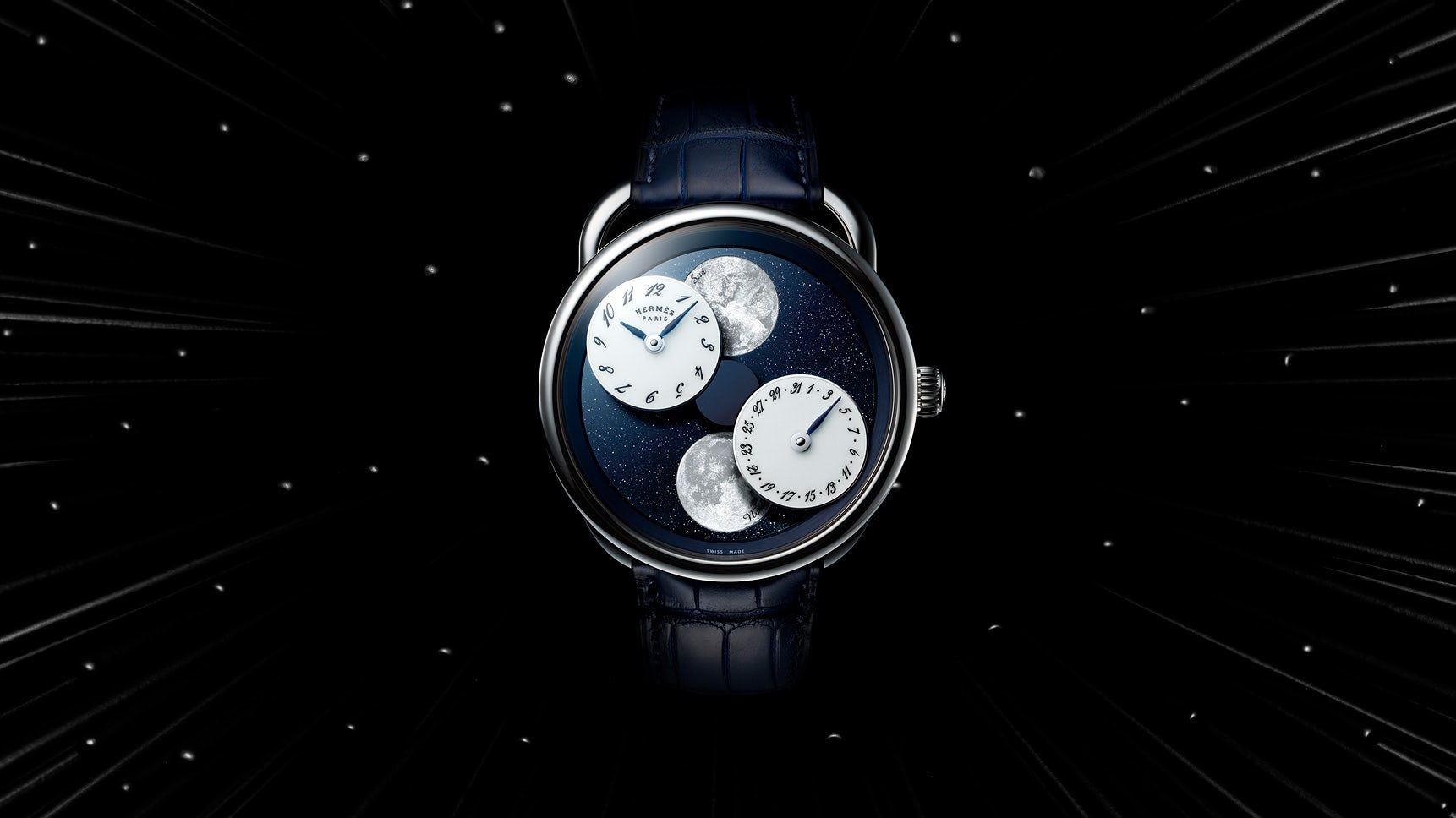 There are few materials that can portray the beauty of the night sky with as much finesse as aventurine. First discovered in the 17th century by a Venetian glassmaker who accidentally spilled copper filings into molten glass, the material — named after the latin word “per avventura”, or “by chance” — breathed new life into the world of glass-making.

When a newly-discovered variety of quartz with gold-specked inclusions surfaced in the two centuries later, jewellers used the name interchangeably between the natural stone and the man-made material, and it didn’t take long for the watchmaking world to catch on.

Style
Uncomplicate this: Equation of Time, a poetic complication that pays tribute to the sun

Aventurine isn’t a highly valuable commodity in itself like diamonds or meteorites are, but it lends a sort of magic to timepieces that’s hard to replicate with any other. The poetry of time is rarely fully conveyed on a dial that usually spans no more than 44mm, but aventurine manages to capture the spirit of the cosmos with its shimmering gold particles. Little wonder then, that it’s so often used to accompany celestial complications such as the moon phase and perpetual calendar.

We might no longer be able to gaze upwards to a night sky filled with stars, but these watches with aventurine dials are a spectacular reminder of what could be. 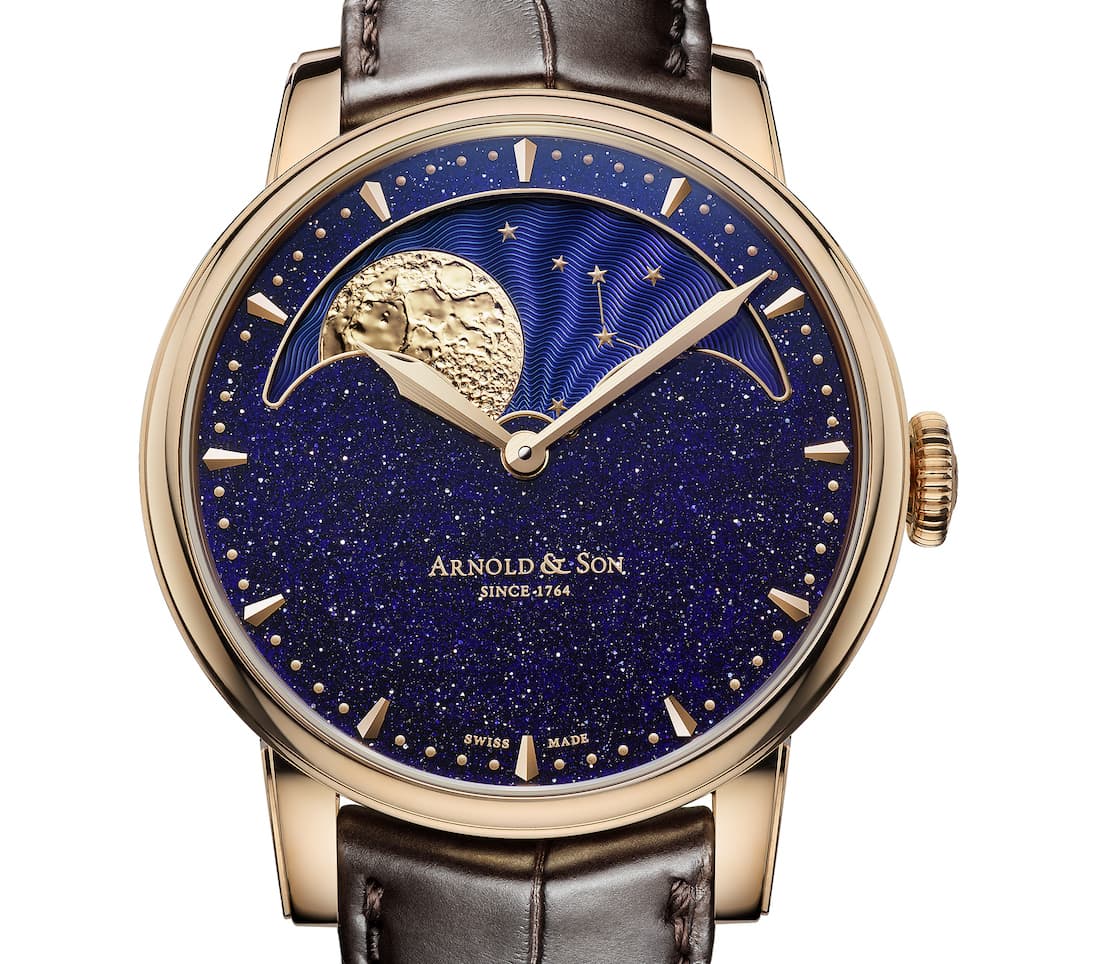 One of the prettiest moon phase watches around just got even prettier. The Arnold & Son HM Perpetual Moon watch has spawned a few variations but it is this aventurine version that captures the celestial beauty of the complication in its entirety.

As the focus of the timepiece, and rightly so, the moon phase display stretches from 10 to 2 o’clock on the dial and houses an exceptional recreation of the moon in white gold, sculpted to perfection and adding more depth to the dense speckling of the aventurine dial. The craftsmanship continues well within the 42mm timepiece, where a manual-wind calibre A&S1512 provides a moon phase accuracy to a one day deviation every 122 years. Only 28 pieces of this red gold timepiece will be created. 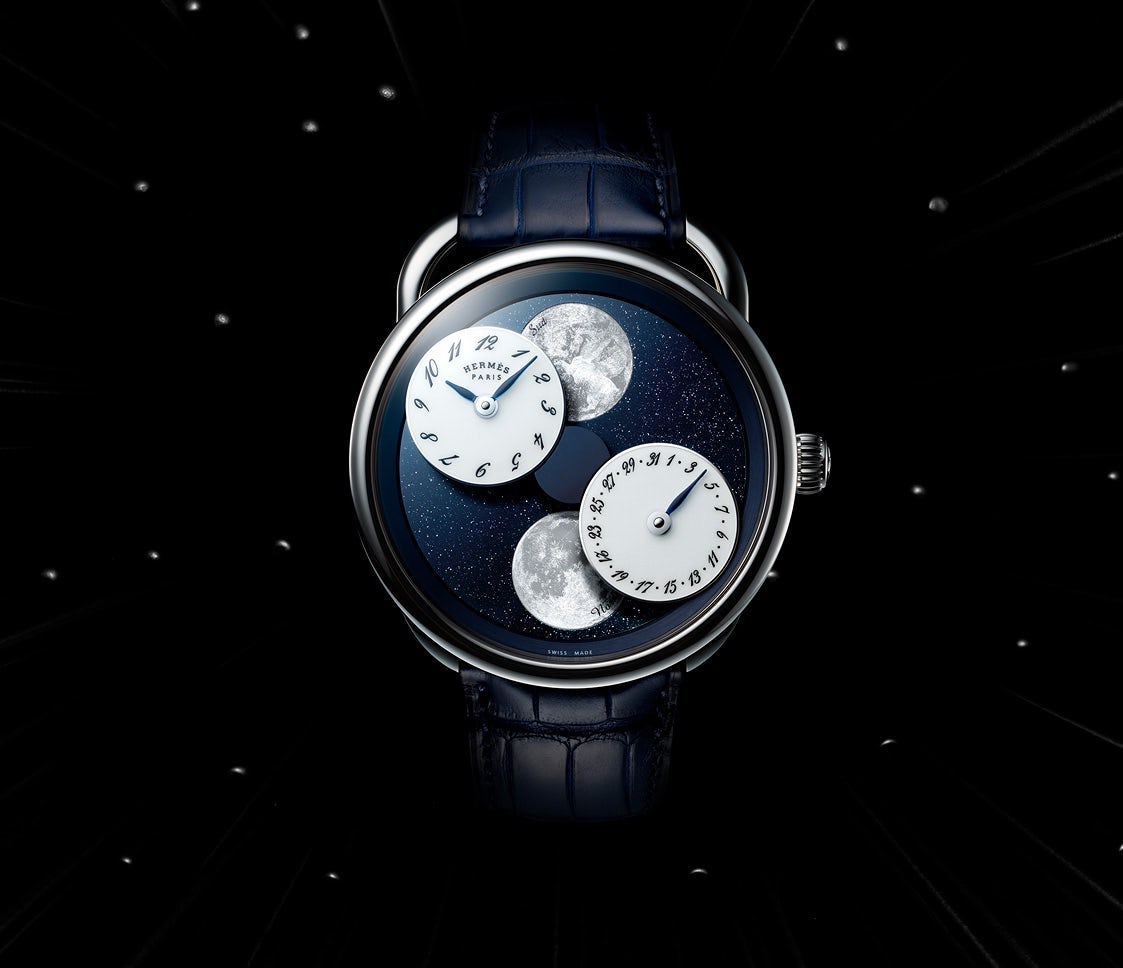 Launched at the SIHH earlier this year, the Maison’s whimsical take on the double moon phase complication is fine example of what a little imagination can do to an otherwise traditional timepiece.

Unlike most moon phase watches, the Arceau L’Heure De La Lune sees a pair of stationary mother-of-pearl moons that sit beneath a pair of floating lacquered dials. The dials do more than tell the time and date; they rotate around the dial once every 59 days to reveal the moon phase in both the southern and northern hemispheres at once. Surrounding this dramatic presentation is of course, a dark aventurine dial, perfectly contrasting the pale orbs on the timepiece. 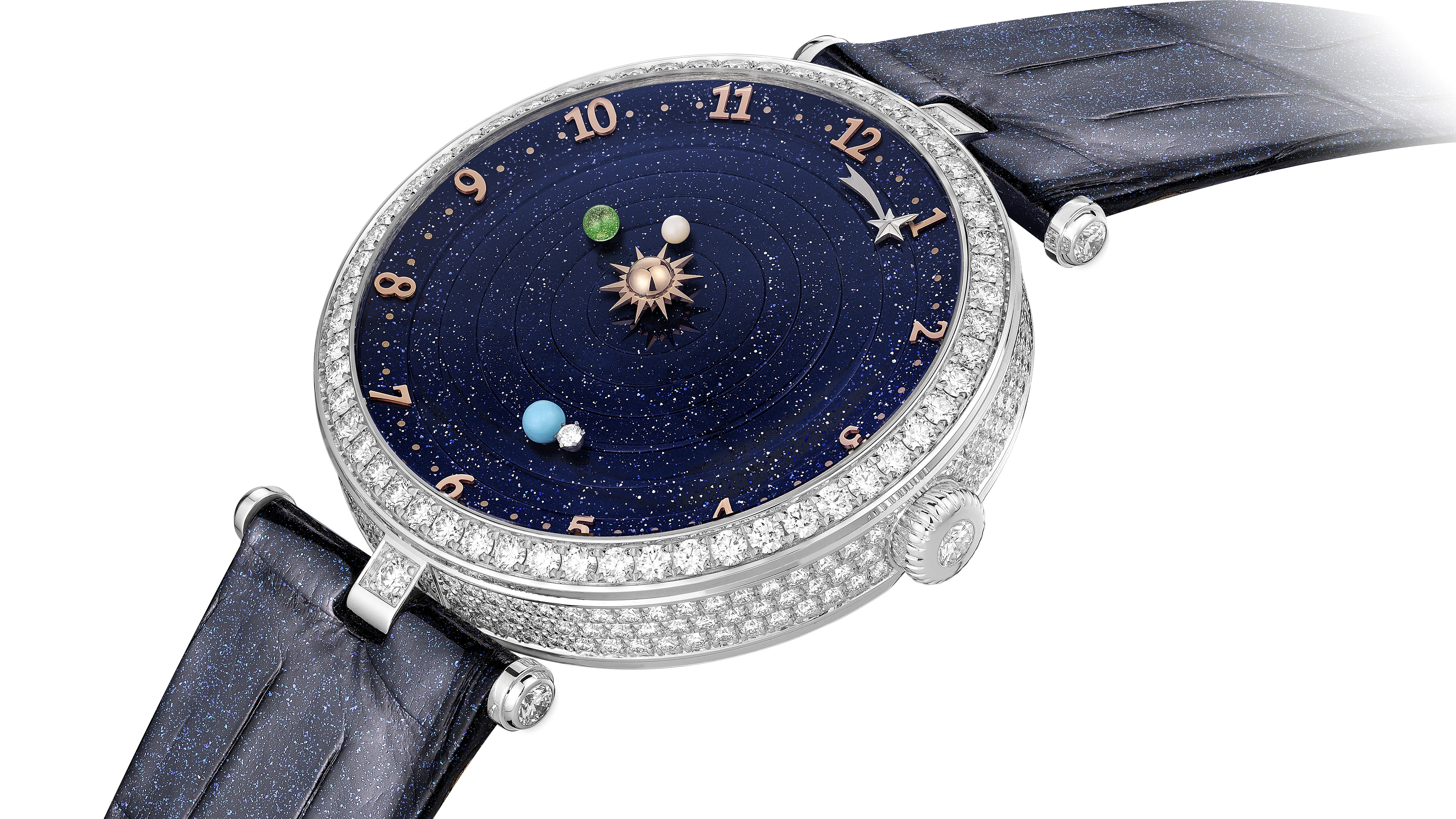 If anyone can accurately portray the mystic of a night sky, it’s Van Cleef & Arpels. Here, the poetry of time is conveyed via the entire solar system. Concentric rings made of aventurine are laden with tiny spheres representing planets such as Mercury, Earth, Venus and the Moon, which edge around the dial as they would in the sky.

Because the planets rotate at vastly different speeds, the complex movement was two and a half years in the making for its designer Christiaan van Der Klaauw. Surrounding this enchanting 38mm display are diamonds that smother the white gold bezel. 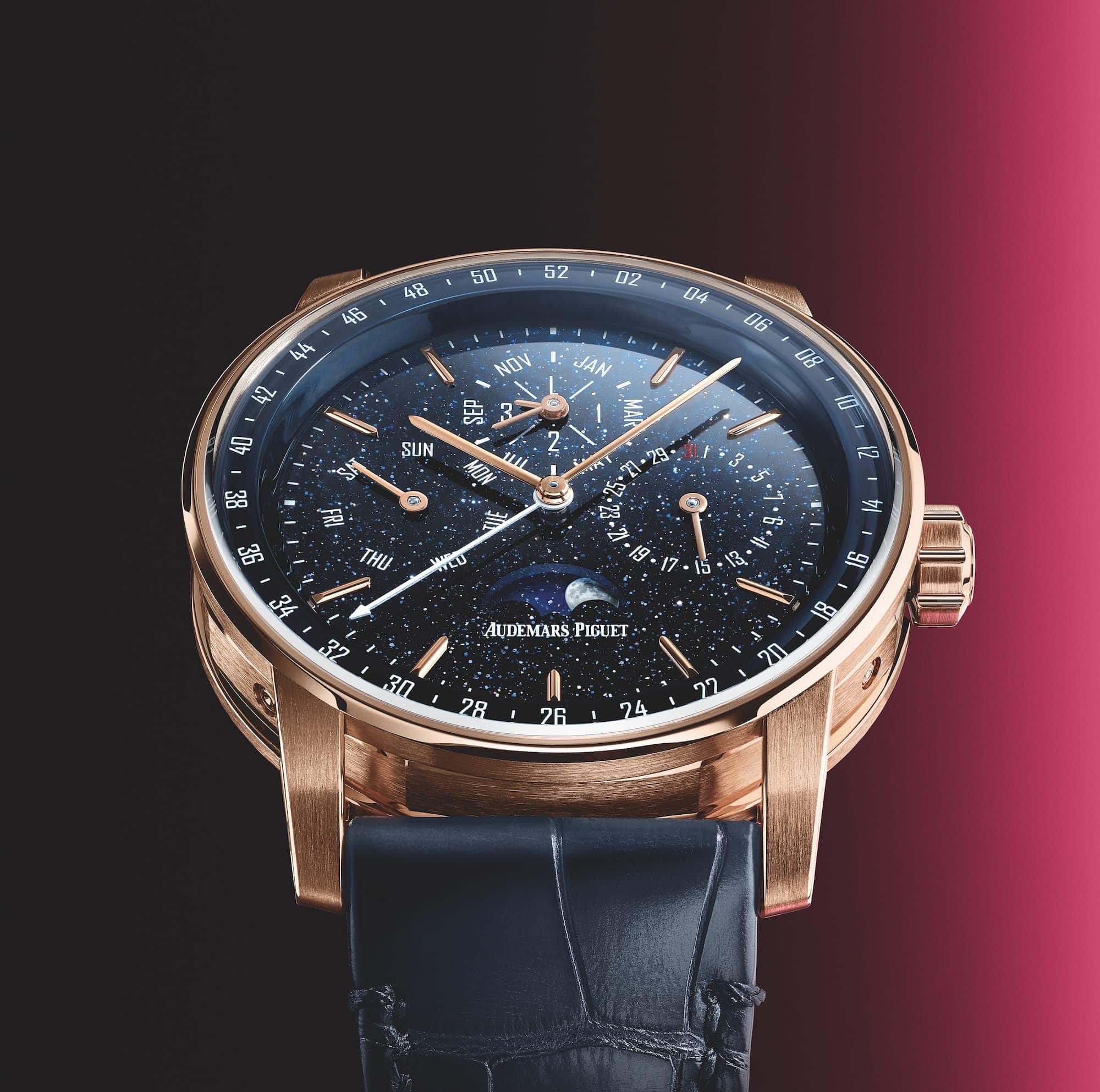 Launched this year with great fanfare, Audemars Piguet’s Code 11.59 aims to refresh the brand’s offerings of time-tested traditional pieces with new references. One of which sees an aventurine dial that’s paired with one of their most lauded complications to date — the perpetual calendar.

As part of its new design language, the 41mm timepiece is defined by its recognisable octagonal case, only now embedded within a round case for a more contemporary look. The dual-curvature of the sapphire case brings out the dial’s aventurine details with a more noticeable sharpness too.

In resonating with the celestial theme, a moon phase indication at six o’clock sees a realistic laser-engraved moon sit subtly within the window, while other sub-dials highlight the day, date, month and leap years with incredible accuracy. 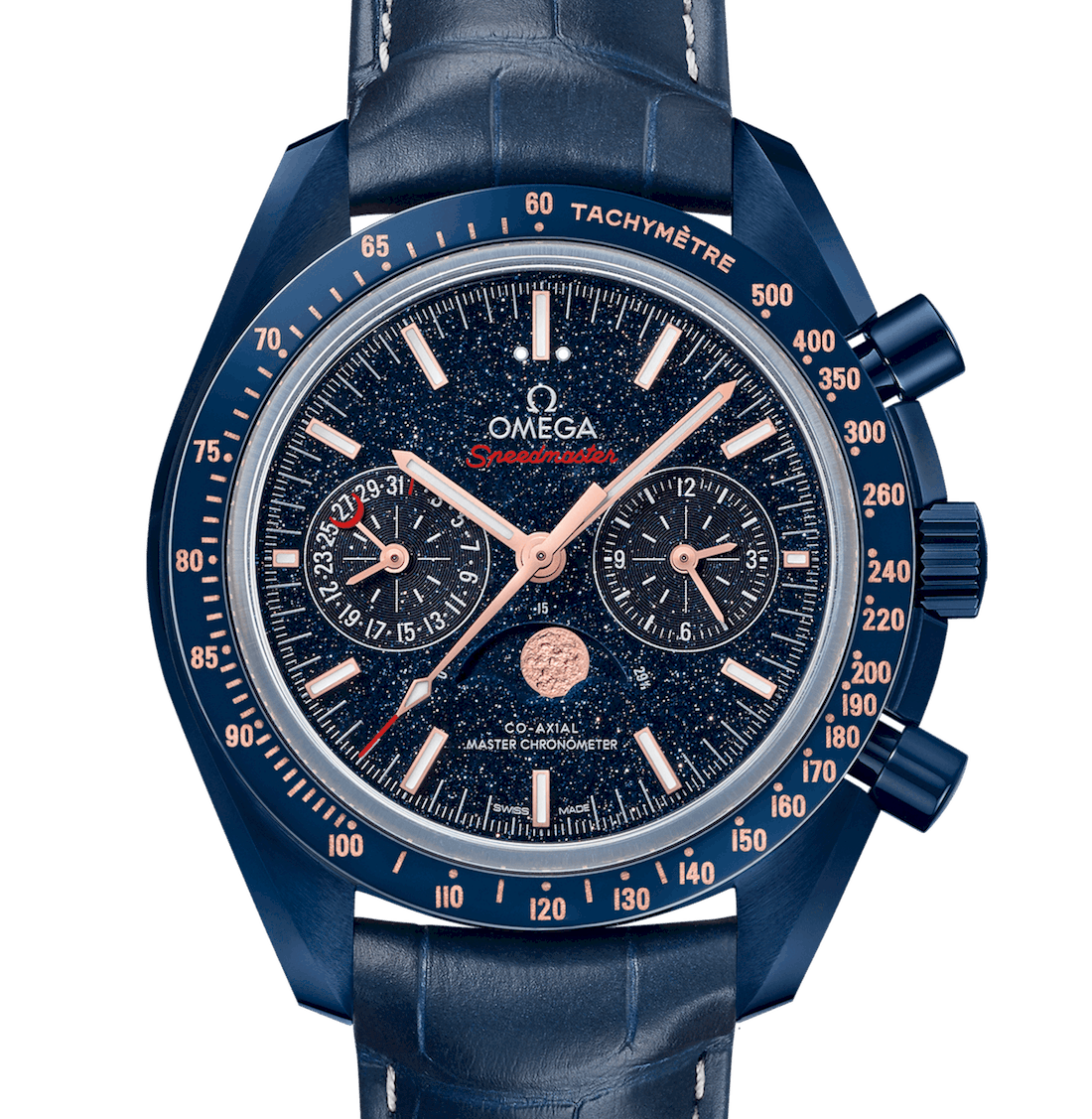 Now synonymous with extra-terrestrial adventure, it was only fitting that Omega joined the list with its very own Speedmaster in aventurine. Aptly named the Blue Side of the Moon, the timepiece is rendered in a rather unusual dark blue ceramic to complement the rich blue starlit dial.

Ceragold is used here to contrast the hands and markers from this celestial backdrop, and it does so with great sophistication. The special alloy is, after all, a clever mix of ceramics and Sedna gold.

Having been part of all six lunar missions, the iconic timepiece receives features such as a chronograph, tachymeter, moon phase, and is METAs certified for precision, amongst many other things.

Watches Luxury Timepieces aventurine watches
Shatricia Nair
Deputy Editor
Shatricia Nair is a motoring, watches, and wellness writer who is perpetually knee-deep in the world of V8s, tourbillons, and the latest fitness trends. She is fuelled by peanut butter and three cups of coffee a day.
Motoring Wellness Watches