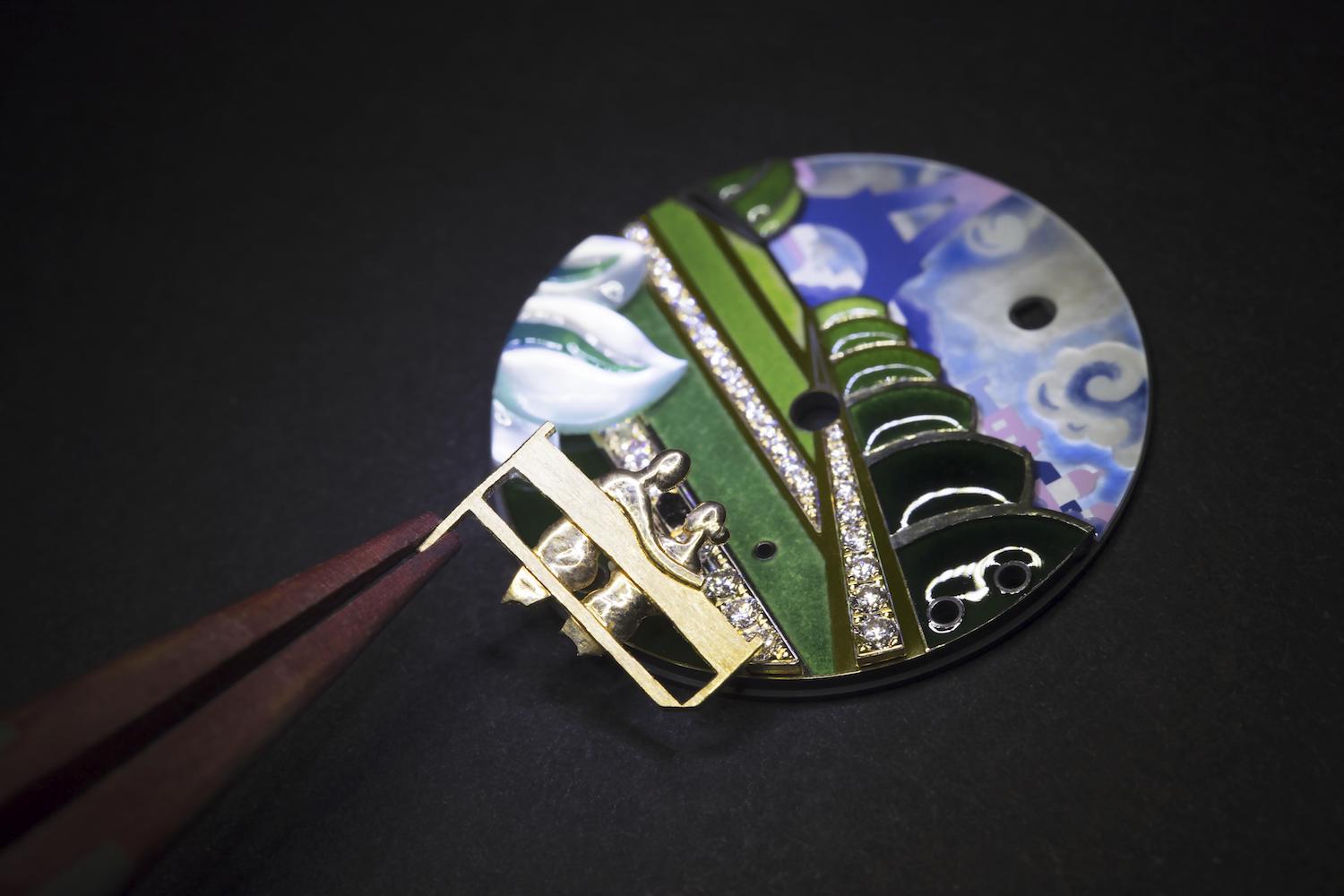 Van Cleef & Arpels isn’t stranger to channeling the romance of timekeeping with its wristwatches. With the theme of love serving as inspiration since its establishment, the Maison has been quietly infusing its timepieces with dreamy visions to ignite passion and incite emotions from its wearers.

Following three new Charms Extraordinaire creations in August, the “Love Stories” collection reinforces the French house’s dedication to its founding theme with even more Extraordinary Dials this year. The former sees Van Cleef & Arpels depict charming scenes of lovers in Paris’ most emblematic locations, accompanied by a good-luck charm that dangles delicately by the side of the dial. As always, these miniature tableaux showcase peak artistry by the Maison, where traditional techniques are still expertly combined today.

With Pont des Arts in the background, the Charms Romance Parisienne Rencontre portrays the electricity between a man and a woman destined to be lovers. Sculpted in rose gold, their first meeting is illuminated by a spessartite garnet sun, which sits above a champlevé enamel and miniature-painted dial. A gradation of pink sapphires on the bezel add radiance and tenderness to the scene.

Meanwhile, the Charms Romance Parisienne Retrouvailles Watch turns up the heat a notch by depicting the young lovers’ first tryst. This time set amidst a rich blue backdrop, the timepiece sees the pair reunited at nightfall on a balcony overlooking the Place Vendôme. The moonlit scene — courtesy of a diamond crescent — is the marriage of several traditional crafts. Here, the mother-of-pearl dial is gold-carved, painted and enamelled, and then housed within a gradated blue sapphire bezel for that added mystery.

The fairytale culminates with the Charms Romance Parisienne Promenade Watch, where the lovers are united at Champs de Mars to admire the springtime blooms. The sun — set with yellow sapphires — shines on the Eiffel Tower in the distance, and highlights the vivid miniature painting on this dial. Depth is lent via a masterful variation of green tones, as well as the painted mother-of-pearl flowers in the foreground. On the bezel, blue sapphires and tsavorite garnets accentuate the exuberance of spring.

The romance then continues with three new Extraordinary Dials Poèmes en Fleurs, each an exercise in craftsmanship by Van Cleef & Arpels.

Inspired by the remarkable volume of poems presented to Julie d’Angennes by Charles de Sainte-Maure in the 17th century, the collection sees 41mm diamond-encrusted watches that spotlight three flowers, carefully chosen for their symbolism. As with the Charms Extraordinaire series, perspective is at play here; each unique piece sees the flowers blossom in the foreground to become the ultimate focus of the timepieces. At the back, different landscapes — Persia for the rose, Greece for the violet, and Byzantium for the tulip are brought to life by coloured grisaille enamel for its ability to create delicate contrasts.

To add to the enchantment, the picturesque scenes are accompanied by engravings of an extract of a poem on the watches’ back, a little reminder that old-school romance still exists wherever you go.

Style Watches Van Cleef & Arpels Luxury Timepieces
Shatricia Nair
Managing Editor
Shatricia Nair is a motoring, watches, and wellness writer who is perpetually knee-deep in the world of V8s, tourbillons, and the latest fitness trends. She is fuelled by peanut butter and three cups of coffee a day.
Motoring Wellness Watches Beauty Style