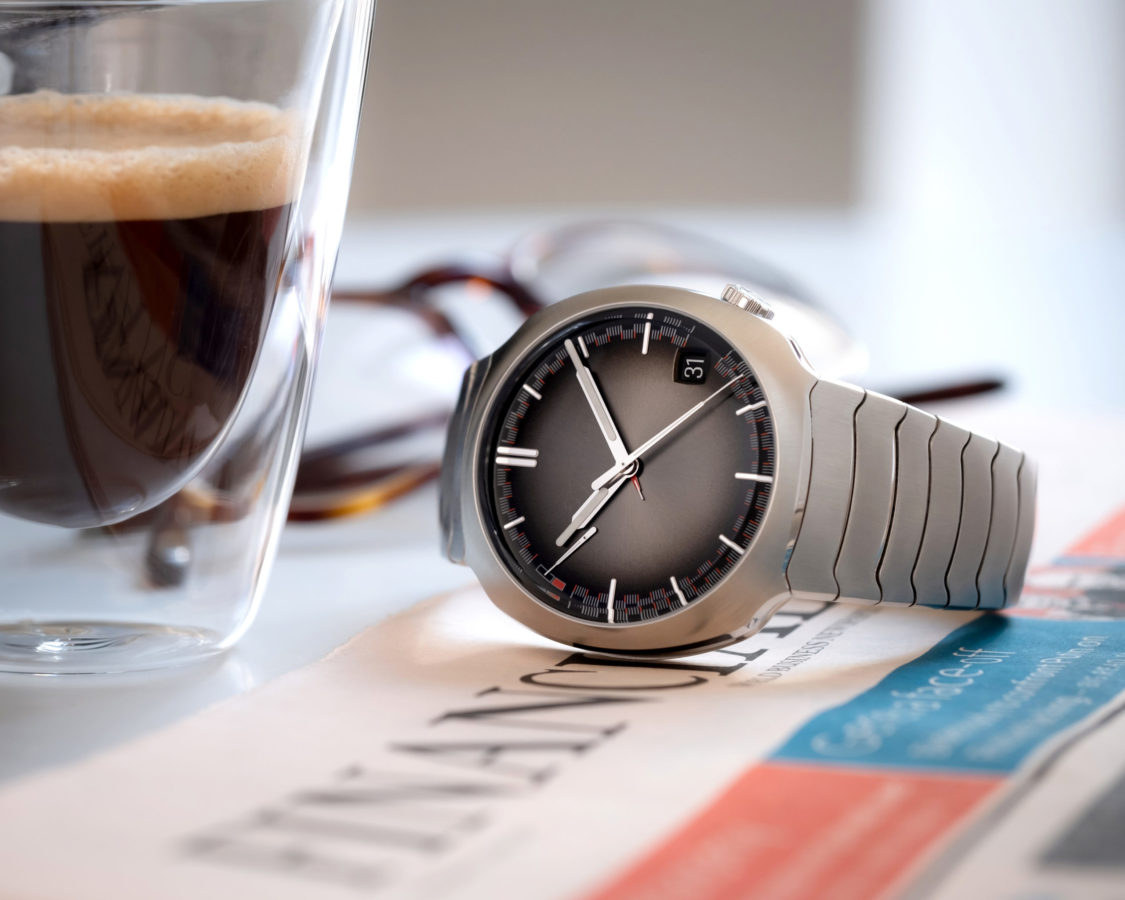 While you might wonder what business sense it makes to have a trade fair like this held nearing the end of the year, long-time observers of the industry will instinctively know that despite unveiling their annual line-ups around April or May, numerous brands customarily keep a highlight or two under wraps before presenting them around the month of October and November. Geneva Watch Days 2021 has had this strategy timed perfectly. From what’s being unveiled on the opening day and progressively so over the week at numerous venues overlooking the picturesque Lake Geneva, we are absolutely thrilled.

These are the watches (or clocks) unveiled so far that have really caught our attention and we will explain our reasons. Cool is personified by this MB&F x L’Epée 1839 Orb measuring 17cm in diameter conceived by MB&F in collaboration with L’Epée 1839. You could call it a clock but MB&F founder Maximilian Büsser would likely call it something else, something laced with superlatives to be more stupendous sounding. Who can blame him? This objet d’art is beautifully made and in its unrestrained, futuristic aesthetics, lie many prerequisites for it to be qualified as an MB&F creation.

Though we gravitate towards the version in white, the orb is also offered in black. Composed of lacquered aluminium, the four blades enclosing the intricate movement boasting eight days of power reserve are ultra-flexible. You can manipulate these blades individually, where you can unfurl the orb and let it sit upright like an arthropod-inspired robot, on its side with the blades partially open as though the orb is transformed into a beetle in full flight, or essentially any position you might think of as long as the mechanism consisting of hinges and magnets permits it.

When it is fully unravelled, the orb measures 30cm in diameter and 24cm in height. 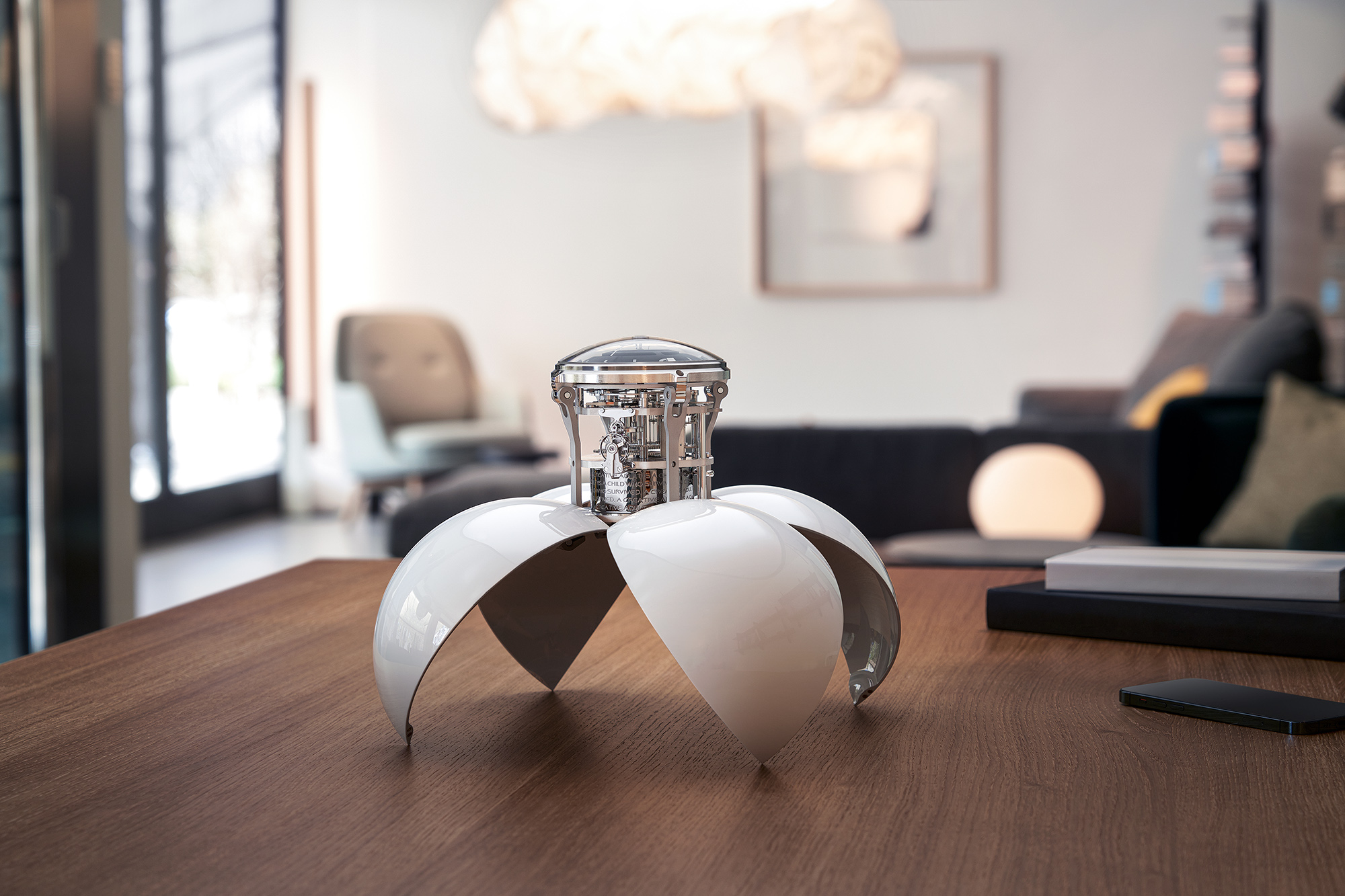 The fulcrum of the orb features the L’Epée-designed and -manufactured movement. While it is visually fascinating, the functionality which is most fascinating is its ability to chime. Supported by two barrels independent of each other – one for timekeeping and one for striking – the orb rings out the number of the hour. This can be initiated via a button on the side of the clock mechanism. 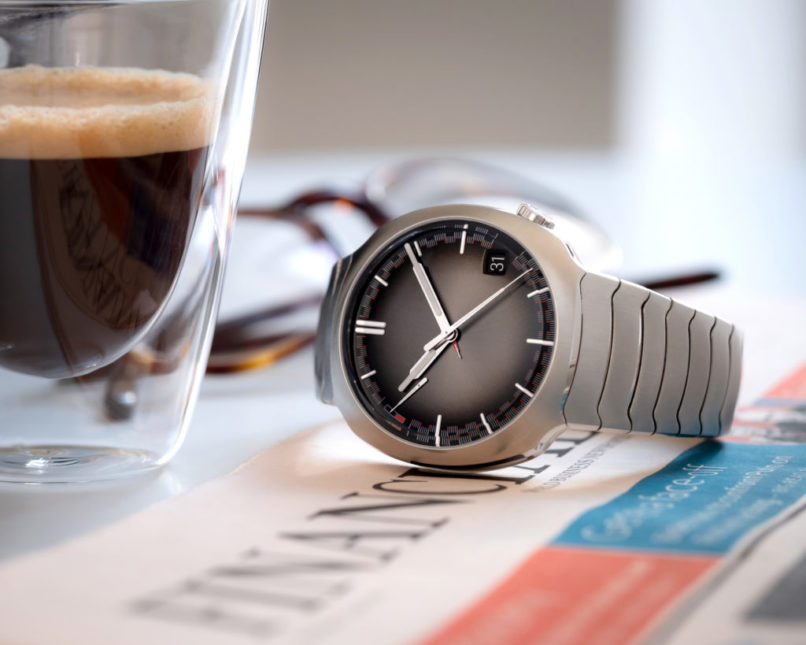 Despite the embargo put in place, by publicising multiple teasers, the brand has all but confirmed a novelty melding elements of the Endeavour Perpetual Calendar and the Streamliner Centre Seconds. The result is as astounding as we hoped.

One of the most idiosyncratic watches in the industry, the Endeavour Perpetual Calendar tore up the handbook of the perpetual calendar, eschewing maximalism and the overloading of information. The aptly christened Streamliner Perpetual Calendar abides by the brand’s minimalist principle.

You can see this from two antipodal perspectives. It is the debut of a Streamliner with a perpetual calendar movement thanks to the in-house hand-wound HMC 812 movement boasting 168 hours, or the first Moser perpetual calendar with an integrated bracelet unique to the brand. Either way, it isn’t a straight transplant of the Endeavour movement HMC 341 into the Streamliner guise; the HMC 812 features direct drive centre seconds absent in the HMC 341.

The 4 o’clock crown is a nod to the Streamliner Flyback Chronograph. As opposed to the Endeavour Perpetual Calendar, the date aperture is moved from 3 o’clock to 4 o’clock, against the backdrop of a sunburst blackor fumé dial. Since the Endeavour Perpetual Calendar isn’t fitted with a central second hand unlike the Streamliner Centre Seconds, the tiny arrow indicating the month on the Endeavour is reworked into a slender hand reminiscent of dashboard gauges, in line with the Streamliner’s code of design and to avoid cluttering up the dial. On top of that, the very useful power reserve indicator is uprooted from 9 o’clock to 10 o’clock as a counterpoint to the large date. 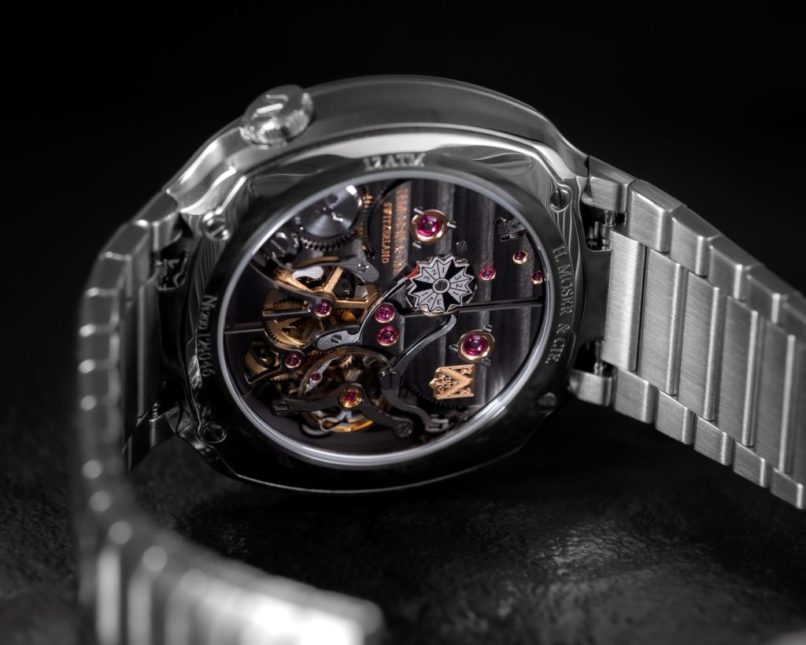 Is there anything not to like about this watch? I struggle to think of any. The movement is an incredible sight to behold. Purists may cry that a perpetual calendar wristwatch should be 40mm, but hey, this is not an ordinary perpetual calendar and, by all means, Moser isn’t a traditional watch brand.

We suppose the dial could be made in fumé green or funky blue for the next iteration. After all, the first-ever Streamliner – Flyback Chronograph Automatic – isn’t too superficially dissimilar from this perpetual calendar and we know what followed suit.

The Streamliner Perpetual Calendar is offered in a 42.3mm steel case with an integrated steel bracelet. 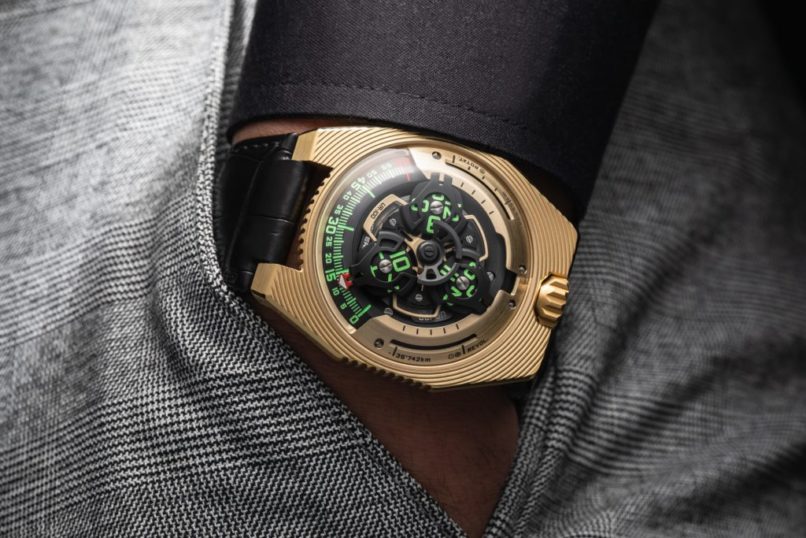 Unless you’ve been keeping abreast of boutique watch brands, chances are your knowledge of Urwerk is limited. After all, staying faithful to a production count of 150 pieces annually means that the brand produces a fraction of what other independent brands churn out.

What predominant makes Urwerk tick in the eyes of horological savants, apart from the futuristic design, is the visually gratifying wandering satellite hour display. The UR-100 SpaceTime launched in 2019 managed to even surprise existing clients, by incorporating the satellite hour mechanism and additionally introducing them to an astronomical complication indicating the distance inhabitants have travelled on the Equator as Earth rotates over a 20-minute period, up to 555km, and the distance travelled by Earth as it orbits the Sun, over a 20-minute period, up to 35,740km. 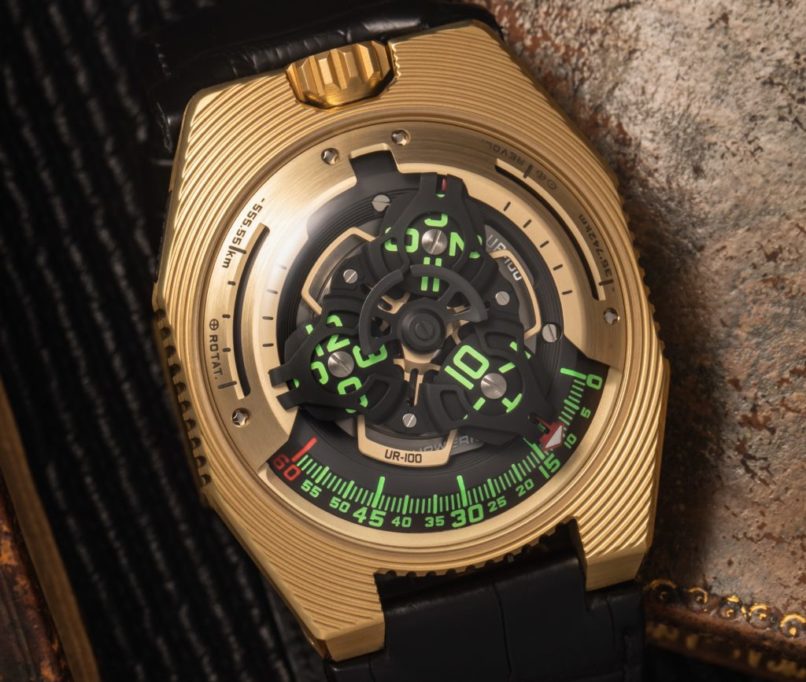 The raison d’etre for the latest UR-100 iteration lies in the choice of the alloy. Influenced by the gold and silver alloy of civilisations past, for its regal quality and tendency to patinate, the Electrum boasts an 18k 2N Electrum yellow gold case made of an organic gold and palladium alloy that will oxidate and develop a greenish tint over time.

What’s more, numerous grooves engraved vividly onto the case offer a sense of geometric classicism that augurs well for the alloy inspired by ancient cultures. It enables the case to reflect the light in a way not possible with conventional case shapes.

“Everyone can project their own universe into this design. I see the tiers of an ancient Greek theatre, the subtle pleats of an Iris van Herpen dress, a piece of raw earth hollowed out by the imprints of time, the Seigaiha motif of a traditional kimono… This creation is an invitation to embark on a temporal and sensorial journey,” says Martin Frei, co-founder and chief designer.

In the spirit of the brand’s 175th anniversary, the limited-edition collection of the seven exquisite Marine Torpilleur came with two new movements, complications, chronographs and enamelled dials to adore.

Echoing Ulysse Nardin’s heritage, the Marine Torpilleur – which took its name from the small, fast-moving ship – was inspired by explorers roaming the ocean with their deck chronometers. It’s hard not to miss the resemblance.

Of the seven, there is one that truly caught our gaze: the Marine Torpilleur Tourbillon Grand Feu. With the flying tourbillon as the watch’s acme, the harmonised combination of black and gold oozes elegance. Limited to 175 pieces; the timepiece has a rose gold satin-finish case with an open sapphire case back.

At 42mm and water-resistant to 50m, the black grand feu enamel dial by Donzé Cadrans juxtaposes brilliantly with the rose gold hands. If you take a closer look, the power reserve indicator glistens at 12 o’clock, while the flying tourbillon (powered by Caliber UN-128) gyrates gracefully at 6 o’clock.

To honour its marine heritage, this versatile dress watch can be paired with alligator and rubber straps, as well as the exclusive R-strap made of recycled fishing nets.

Cortina H. Moser & Cie. The Hour Glass geneva watch days
Justin Ng
Digital Content Director, Kuala Lumpur
Often think of myself as a journalist and so I delve deeper into a range of topics. Talk to me about current affairs, watches, travel, drinks, new experiences and more importantly, the business, economics and dynamics behind it.