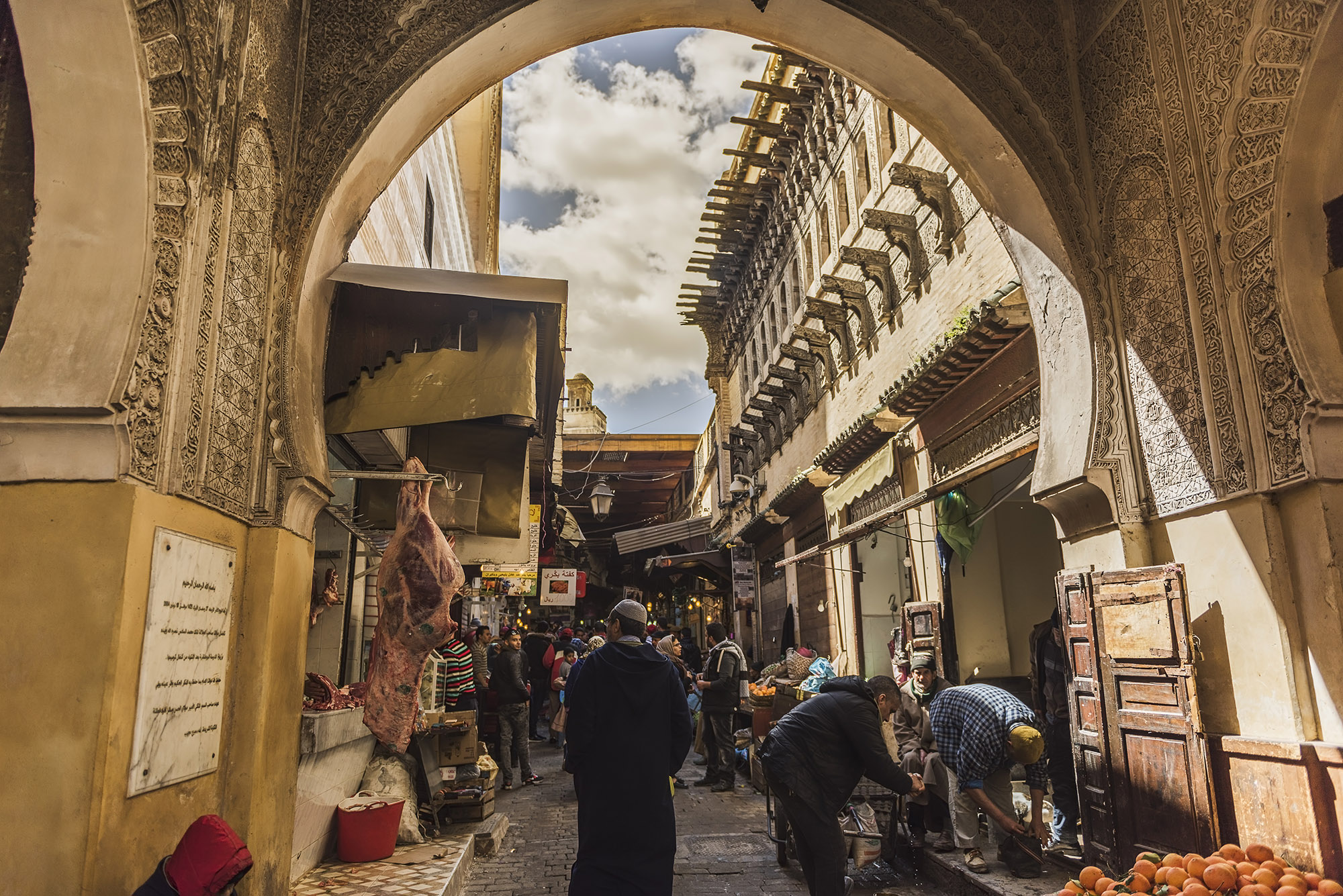 Fes el Bali – Morocco’s ancient capital is not for the faint of heart. Those whose notion of luxury travel is to soak in a sense of tranquillity may want to look at other destinations in the country. This, after all, is a medieval era walled city that still deploys donkeys as a mode of transport, where stray cats roam the narrow cobbled streets in moonlight and sellers call out to you in souks already heaving with crowds.

Yet it is precisely this magical medieval maelstrom that draws the traveller. It’s an entire world away from our ordinary lives with cultural, gastronomical, architectural and historical experiences that even other Moroccan cities like Marrakesh can’t offer.

Travel
Where to travel in 2018: The most luxurious desert retreats

That’s because Fes el Bali and the city of Fez at large has always been Morocco’s cultural centre. Its first buildings in the medina were built in the 8th century and was the capital from which Moroccan dynasties spread its influence across North Africa and parts of modern-day Spain and Portugal. It even lays claim to being home to the world’s oldest (and still-functioning) university named Al Qarawiyyin whose alumni includes the likes of Pope Sylvester II – the man who introduced Arabic numerals to the Western hemisphere.

Today, the entire medina (which means city) has been designated a UNESCO World Heritage site and despite its age, a population of over 150,000 proud Moroccans still live here. If you’re visiting anytime soon, here’s our tip: get a guide for its narrow alleyways are a labyrinth that you could easily get lost in.

Chances are, the first dish any visitor to Morocco would encounter would be served in a tagine. These are handmade and painted vessels with conical tops used to slow cook dry stews over a low charcoal heat. Keep an eye out for the kefte — minced meat in a tomato-based gravy jazzed up with cumin and an egg, eaten with knobz — a round leaven bread topped with sesame seeds.

Couscous is a well-loved staple and most homes and restaurants prepare it on Friday — the day that most souks and shops are closed. These are tiny balls of durum wheat semolina served with a good heap of meat or vegetables. While it might somewhat resemble a biryani, the flavours are much more restrained.

But stopping there would do a grave injustice to all its food offerings. Go deep into the nation’s culinary heartbeat and you’ll find it to be incredibly nuanced. Terroir is a big thing here and even laymen would be able to tell you how olives and dates from different regions taste incredibly different.

While walking around the medina, keep an eye out for the honey shops identifiable from their blue plastic urns and ask for honey from the Atlas mountains. The storekeeper would have a range to choose from but our advice would be to try them before purchasing. The honey from Carob trees — a dark milky brown hue — is our favourite for its chocolatey notes.

Despite its medieval veneer, the accommodation options in Fez are plush thanks to a large presence of foreign investment in its tourism frontier. There are no faceless large hotel chains here (yet). Instead, take your pick from the many beautifully restored and designed luxurious riads. These are palatial compounds that appear nondescript from the outside but house a plaza with a garden and often a fountain in the middle. Expect interiors replete with handwoven rugs, pillars that reach into ceilings featuring intricately carved geometry while floors are inlaid with botanical mosaic patterns.

Those who trust the Mr and Mrs Smith brand can check in at Palais Amani hotel — a 17th century palace that’s been outfitted with all your modern day comforts. The 15 rooms here are opulent while quiet — away from the hustle and bustle of the souks outside. If you’re in town around February, expect the trees in the large courtyard to be brimming with fresh oranges.

Riad Dar Bensouda is another excellent option. It’s really two riads that’s been merged into one and it features giant cedarwood doors that open to well-appointed rooms. For days where you just wish to stay in, there’s a modestly sized hammam within the property and a restaurant where a breakfast of fruit, eggs done your way as well as a selection of sweet pastries and bread are on hand. Don’t miss the rooftop with its plush ample seating (and a strong wifi signal) where you can while the day away and listen to the collective hum of the prayer calls every evening.

While staying in the medina and walking through its souks is already a cultural experience on its own, there are several spots one simply has to go. Head to Chouara Tannery and witness Morocco’s leather tanning industry which still uses processes that have remained unchanged since the medieval era.

Here, no artificial chemicals are used in its leather production. Instead, quicklime, salt, water and pigeon droppings (high in ammonia) are used to soften the leather and prepare it for dyeing. All dyes are derived from plants – think along the lines of indigo for blue, henna for orange and saffron for yellow. Expect a strong smell but guides usually dole out generous sprigs of mint which makes the visit a little more bearable.

History buffs meanwhile have to make their way to Al Qarawiyyin – the world’s oldest university dating back to 859. While it is now a mosque, a new wing was built so visitors too can enter, for it is home to one of the oldest libraries of the world housing 4000 ancient manuscripts mostly in Arabic. In an age where gender equality is under the spotlight, it’s worth noting that the university and library were the efforts of a woman named Fatima al-Fihri.

If you’re struck by all that mosaic work or even the tagines you see being sold at the souks, head to Art Argile to see how they’re made. It’s a pottery workshop where you get to see skilled craftsmen working the ceramic wheel, painting tagines and even hand chipping each tiny mosaic before laying it out on a frame to form the bigger picture. There are plenty of pieces here for sale, and while they tend to cost more than what’s available at the souks, these are higher quality works and often sport more decorative embellishments (think silver detailing) that reflect the artist’s level of mastery and hours put in.

Morocco is one of those countries where getting a driver is essential. Several neighbouring towns are worth making day trips for. Chefchaouen should be at the very top of your list – the town is known for its blue walls which is at the peak of its beauty in the afternoons when the sun’s out.

It’s a four-hour drive from Fez so start your day early to get there by lunchtime. Along the way, you’ll see orange, pomegranate and olive plantations. If it’s in season, farmers would often set up makeshift stalls so be sure to stop by for the produce as it’s as fresh as it gets. The oranges for instance — known locally as the Naville variety — are huge, measuring the size of your palm, incredibly sweet and best of all, seedless.

Another site worth visiting is Volubilis, about two hours drive out. This was the capital of the ancient Roman-Berber kingdom dating back to 3rd century BC. Expect to see an excavated Roman city replete with basilicas, Corinthian columns and reconstructions of every day objets from Roman life like olive presses and stone ovens.

Morocco boasts the four seasons so the best time to go would be in spring — from March to May as well as autumn in September to November. Avoid summer if you’re hoping to make a trip to the Sahara (a 10 hour drive from Fez) as the heat can be unbearable. If you’re in Morocco during the fasting month of Ramadan, expect a festive atmosphere come evening after Moroccans break their fast though traffic tends to be heavier during this period.

Travel North Africa Morocco Mr and Mrs Smith Africa check out UNESCO heritage site luxury riads Fez Chefchaouen tagine Riad Dar Bensouda
Azimin Saini
Editor
Azimin Saini is the Editor of Lifestyle Asia and manages the team in Singapore. He has been told the sound of his backspace is like thunder through the clouds. On a regular day, he has enough caffeine in him to power a small car. Follow him on Instagram: @globalgastronaut
Restaurant Review Chef Interview Entrepreneurs