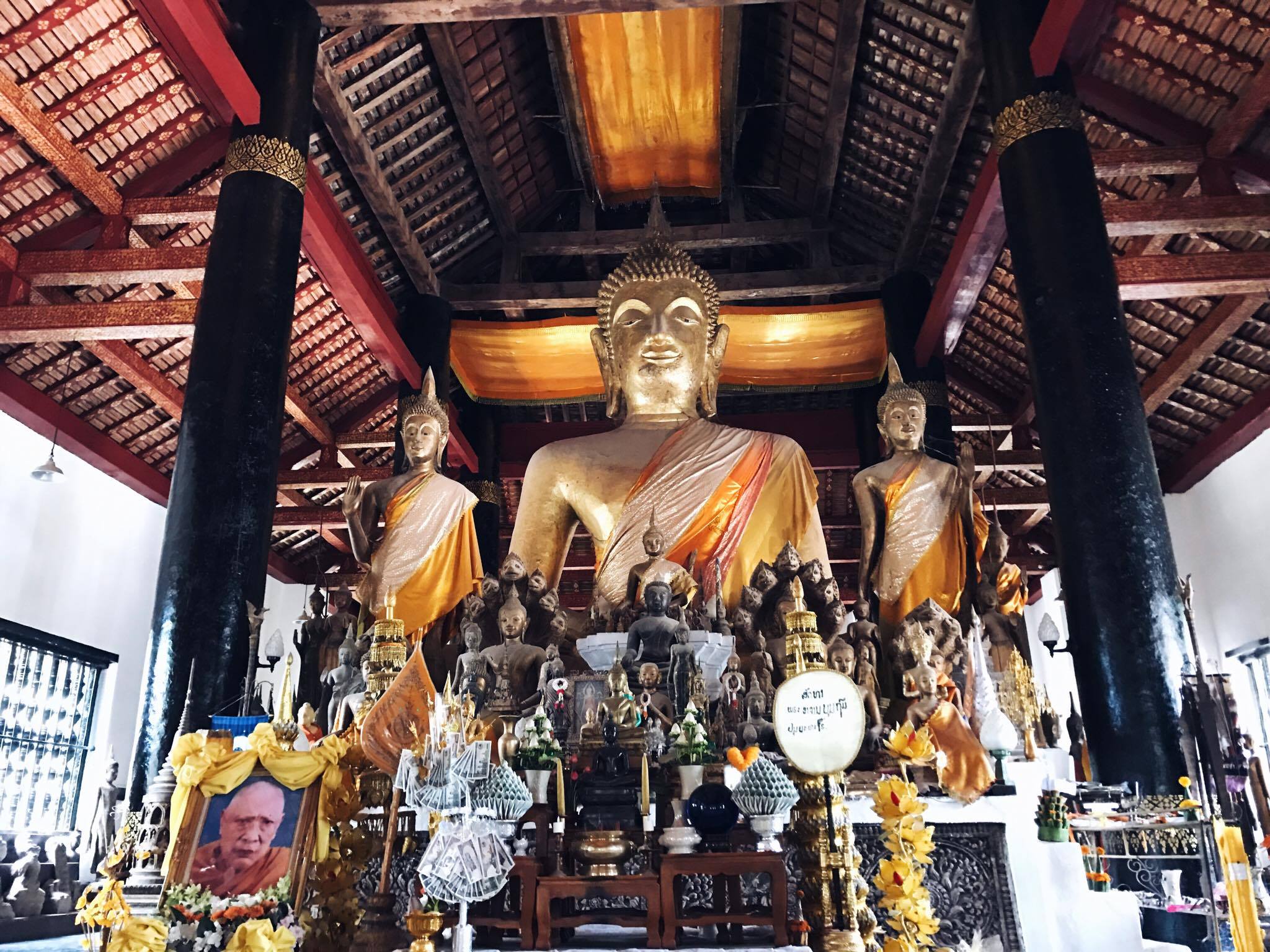 In today’s world where tourism has taken over most destinations, for better or for worse, it is rare to find an untouched city. Laos comes close. Although a landlocked nation, the country is encompassed by forests and mountains of the Southeast Asian Peninsula — boasting scenic views such as the meandering Mekong and Nam Khan rivers, towering mountains, and limestone karsts in the northern part of the country. These qualities make the nation feel a world away from its neighbours Thailand, Vietnam and Cambodia.

The Crown Jewel of Laos, Luang Prabang, is the charming little sister to Laos’ capital Vientiane. The UNESCO heritage site (established in 1995) is a gem with quiet alleyways and unpaved backroads that lead you to secret spots like a beautiful restaurant where you can dine by lush palm trees and lotus ponds. Taking a look at the magnificent temples and elegant French colonial architecture, you’ll get a taste of the town’s past as an ancient capital.

Once a backpacker’s paradise (tourism in Laos only took off in the mid-2000s), Luang Prabang is quickly shaping up as a promising destination — with both boutique and luxury hotels opening up around the tranquil town.

We recently stopped by the rustic city and spent a few days at The Grand Luang Prabang, a resort located on the serene banks of the Mekong River, with panoramic views of its surrounding mountains. The historical resort, now managed by Banyan Tree Hotels & Resorts, is situated on a 59,000-sqm estate of Xiengkeo Palace which once belonged to Lao nationalist hero Prince Phetsarath.

The interiors of the resort itself are impressive, featuring a refined and unique blend of French colonial architecture with Laotian motifs. We stayed at the executive Mekong River room, which came with a panoramic view of the Mekong right from our balcony.

The room interiors, like the other parts of the hotel, exude old-world charm with wooden sliding doors, and Laotian textiles found in wall art, cushions and bed covers — showcasing the traditions and cultural diversity of Laos.

Breakfast is served at the Xiengkeo Restaurant, the hotel’s in-house restaurant which provides guests with the best of international cuisine featuring Western, Thai, and Lao recipes. Stepping in, you will be wowed by the high ceilings and polished marble floors set in a stylish colonial building. The restaurant also has an outdoor terrace, where one can enjoy breakfast while taking in the view of the Mekong River.

While the resort offers the usual breakfast buffet spread, which consists of salads, fruits, and a selection of bread including croissants (pretty amazing ones, we have to admit), the breakfast staple for Laotians is Khao Piak Sen — a rice noodle soup served with chicken or pork.

In Laos, you will also find that the baguette remains a daily staple in the former French protectorate. The breakfast baguette is a Lao/French fusion food, and is served two ways — piled high with chicken, ham, lettuce, cabbage, avocado and egg or drizzled with condensed milk, best enjoyed with a cup of delicious Lao coffee.

Buddhism is a major influence in everyday life in Laos. It is a common sight to see monks walking around the town, as well as majestic, historical temples that date back to decades ago.

Luang Prabang’s oldest temple, Wat Wisunarat (or Wat Visoun) was built in 1513. Once home to the Prabang Buddhas, the temple was originally crafted from wood and was a colourful building, before being burned by the Black Haw riders (part of the Black Flag military rebel group led by a Chinese commander) in 1887. It was then rebuilt using stucco and brick and retains some original pieces — including a stupa, along with other small Buddha icons.

The temple now doubles up as a Museum of Religious Arts and showcases an array of religious artefacts and items relating to both Buddhism and the royal family. The temple is a fine example of early Lao architecture, featuring wooden windows reminiscent of the Wat Phou Temple in the South of the country. The building was restored in 1895, and again in 1932.

Another must-visit temple is Wat Xieng Thong, which was built in 1559 and is recognised as one of the finest temples in Luang Prabang. The minute we stepped into the compounds of the temple, which was once known as “The Temple of the Golden City,” we were in awe of its glistening glass mosaics, gilded teakwood panels and low sweeping tiered roofs.

To immerse ourselves fully into the Laotian way of life, we participated in the alms-giving ceremony, courtesy of The Grand Luang Prabang. Alms-giving takes place every morning as the sun rises, beginning on the main street of Luang Prabang before spreading out to all the side streets. Taking cues from the locals, we knelt down and offered gifts such as sticky rice, fresh fruit, and traditional snacks to the monks who passed by.

For a panoramic view of the city, climb up Mount Phou Si, Luang Prabang’s highest point that rises 150m above the centre of town. From the summit, you can enjoy sweeping views of Luang Prabang and its many temples, along with the surrounding landscape of mountains in the distance. We recommend visiting it at dawn, where you can watch the sun rise over the Mekong River.

Don’t forget to go for a swim in the breathtaking Kuang Si waterfall, a beautiful spot thanks to its cascading falls and turquoise waters. There are also swimming holes that make for a natural jacuzzi.

When evening falls, explore the night markets of Luang Prabang, where you can pick up anything from local handicrafts to bottles of Laos whisky (with scorpions or snakes inside) and street food. The best way to get the most out of your experience is by grabbing a Beerlao and savouring authentic cuisine at one of the tables set by the roadside.

Tips before you visit Luang Prabang

As with any other city, it is important to keep in mind and respect the local culture. Most temples and museums require you to cover your shoulders and knees (for both men and women), so be sure to bring a shawl with you wherever you go. And unlike Bali or Phuket, you definitely shouldn’t walk around the streets in swimwear.

SilkAir flies three times a week to Luang Prabang, with a stopover in Vientiane. The subsidiary of Singapore Airlines is currently having a roadshow from 10th – 16th April 2017 at Bishan Junction 8 (Level 2 Atrium) — where fares to Luang Prabang start from S$99 (exclusive all-in fares).

Singapore Airlines Banyan Tree Resorts Luang Prabang Laos UNESCO heritage sites Buddhist culture Alms giving ceremony in Laos Where to stay in Luang Prabang Mount Phou Si Kuang Si Waterfall Silkair The Grand Luang Prabang Khao Piak Sen Hotels by the Mekong River Wat Visoun
Dewi Nurjuwita
Senior Writer
Dewi Nurjuwita is a travel and design writer who can be found exploring the streets of foreign cities with passport in one hand and a cup of coffee in the other.
Travel Architecture Interior Design
Sign up for our newsletters to have the latest stories delivered straight to your inbox every week.