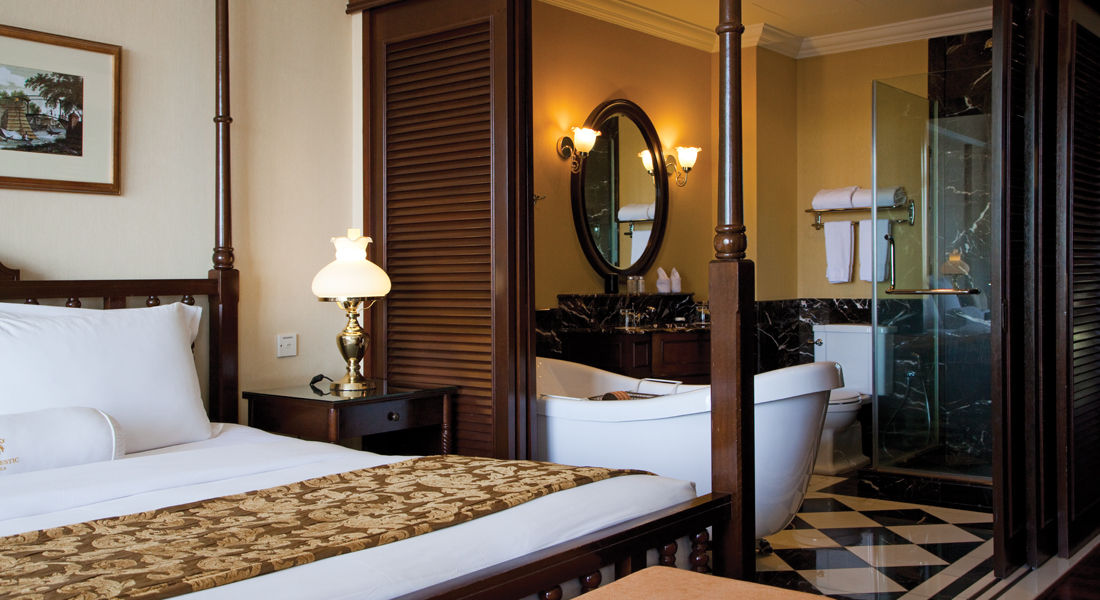 Check in: The Majestic Malacca

Travel
Check in: The Majestic Malacca
Share this article
Next article

Malacca is a coastal city in Malaysia home to a wealth of galleries, crimson colonial buildings and colourful trishaws dotting the cobbled streets. Take a walk around the UNESCO World Heritage Site and you will chance upon old shophouses and mansions that have been restored and turned into stylish galleries and hotels.

One fine example of this is The Majestic Malacca, a boutique hotel operating from a restored 1920s Straits Settlement mansion. The history of the building dates back to 1929, when it was the private residence of tycoon Leong Long Man. The manor featured imported Victorian tiles, stained glass windows, and lavish furniture and fittings.

After Leong’s death, the mansion was sold and converted into the prestigious Majestic Hotel, which hosted ostentatious parties for the wealthy elite of Malaya, as well as movie stars and foreign dignitaries in the ’50s and ’60s. The hotel was eventually acquired by YTL Hotels and reopened as The Majestic Malacca in 2008.

Situated on the banks of the Malacca River just across a remaining traditional Malay kampung, Morten Village, the hotel makes the perfect base for exploring the seaside city, which is steeped in a rich tapestry of multicultural influences. The Majestic Malacca is also located within walking distance of most of the city’s historical landmarks.

If you’re yearning for some retail therapy, swing by the famous Jonker Street, in the Chinatown of Malacca. It is a 15-minute stroll that leads past rows of intricate shophouses, peaceful back alleys, and a bridge that gets you across the river. The street hosts a night market every Friday and Saturday, where you will find authentic street grub, Peranakan knick-knacks, and performances by local singers.

The hotel also offers complimentary heritage tours to all guests, where the hotel’s resident historian leads an informative two-hour walk around the 600-year-old coastal port, weaving a beguiling journey while showing you the city’s prominent historical landmarks and transporting guests back to the 16th century. The route passes through places such as Christ Church — an 18th century Anglican church –, the iconic Stadthuys (built between 1641 and 1660, and believed to be the oldest Dutch building in the east,) as well as rows of old shophouses adorned with colourful murals.

We stayed in the Deluxe room, a brightly-lit space equipped with floor-to-ceiling windows framed by silk curtains, and offering views of the river. It features an open-plan concept with wooden sliding doors that open out to the bathroom — which showcases a large clawfoot bathtub popular during the 1960s, and a chic full glass shower, set against marbled tiled walls and checkered floors.

Bespoke furnishings adorn the room — reminiscent of the building’s past as an extravagant private mansion. We love the timber flooring that gives the room a touch of luxury, along with the teakwood four-panel king-sized bed that occupies much of the space. The room is equipped with a flat screen TV, fully-stocked mini bar, safe deposit box, as well as complimentary tea and coffee making facilities.

Celebrity chef Melba Nunis takes the helm at the hotel’s casual dining establishment, Melba at The Mansion. Malacca’s blend of cultures is apparent in its cuisine, and Nunis aims to showcase just that — whipping up Kristang (a creole ethnic group of mixed Portuguese and Malaccan descent) and Peranakan cuisine emblematic to Malacca.

The Malaccan-born chef’s food is inspired by old family recipes. “The dishes served here at Melba at The Mansion are very close to my heart as they come from the personal collection of my mother, Mercy. I remember how she used to scribble these recipes on little pieces of paper which she kept in an old shoebox,” said Nunis.

We had a leisurely lunch just by one of the original Straits Settlement windows overlooking the river. Our favourites were the cincalok fritters dipped with sambal, Aros Fretu Keluak (wok-fried rice with keluak sambal and chicken), and Inchimintu Karangezu (baked stuffed crab served with pineapple, cucumber and onion salad.)

To savour the ever-popular Peranakan cakes known as kueh, try the hotel’s casual afternoon tea menu at the lounge. The pastries come in a stack of bakul siahs (traditional gold-gilded baskets,) and has a selection of both savoury and sweet.

We recommend the Onde Onde Gula Melaka, which are glutinous rice balls filled with decadent gula melaka. They paired well with our mango tea, which came served in a traditional teapot. It was a pleasantly surprising twist to the usual afternoon tea.

The Majestic Malacca houses a gym right beside its infinity pool, as well as an in-house spa, Spa Village Malacca. The award-winning spa is the world’s first that performs treatments based on the healing heritage of the Baba-Nyonya — a unique blend of Chinese and Malay influences.

We were first treated to a complimentary scalp massage, which was incorporated with olive oil, and fruit shampoo and conditioner to keep our tresses shiny and smooth, and a lime juice and floral water rinse to prevent clogged pores and dandruff. Set to the backdrop of the legendary P. Ramlee’s music flooding the room, the treatment was a relaxing and calming experience.

We were then whisked into the spa room, where we indulged in the egg-rolling therapy (a cooling body treatment for warm energies) combined with Balinese massage. It is believed that hardboiled eggs, when applied externally, have special abilities to settle hyperactivity and calm the mind — whilst drawing out excess heat. After a hectic week in the office, that was exactly what we needed.

If you want a culturally-rich retreat that effortlessly blends luxury with Malacca’s multi-faceted history, we can’t think of a better hotel to stay in than The Majestic Malacca. The hotel boasts a rich and fascinating heritage, with charming interiors that are opulent without being ostentatious. Its food is great too — we loved that its in-house restaurant served up a solid range of authentic Kristang and Peranakan cuisine.

And most importantly, the place has an excellent location situated in the heart of Malacca, making it the perfect place to unwind right after a long (but enjoyable) day of exploring the historical city’s nooks and crannies.

Peranakan Afternoon Tea The Majestic Malacca Peranakan culture Restored hotels Malacca hotels Luxury hotels in Malaysia Egg rolling therapy Kristang cuisine Peranakan cuisine Melba at the Mansion Chef Melba Nunis
Dewi Nurjuwita
Senior Writer
Dewi Nurjuwita is a travel and design writer who can be found exploring the streets of foreign cities with passport in one hand and a cup of coffee in the other.
Travel Architecture Interior Design
Sign up for our newsletters to have the latest stories delivered straight to your inbox every week.