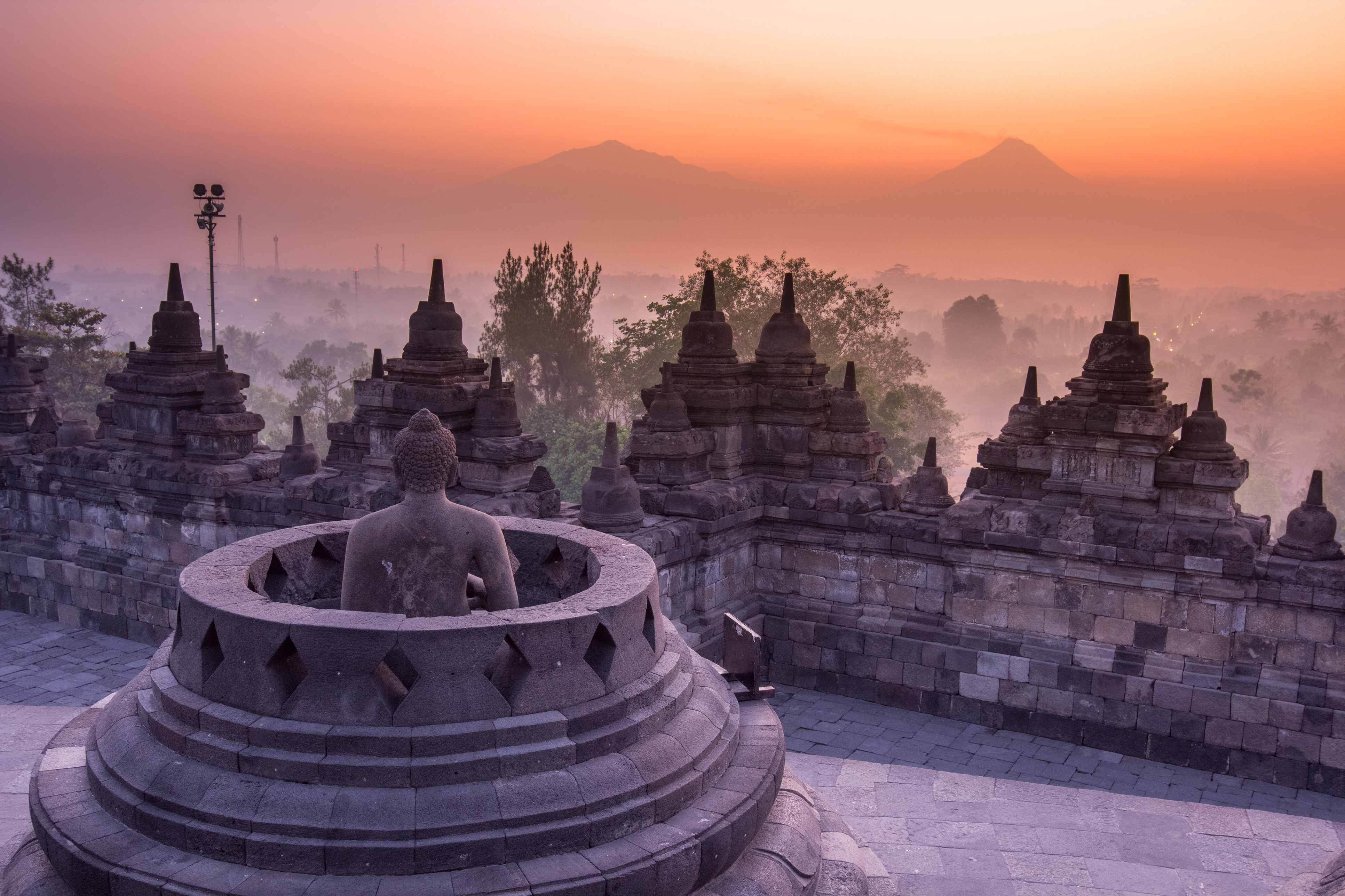 Check out: Yogyakarta, a cultural treasure trove in the heart of Central Java

Travel
Check out: Yogyakarta, a cultural treasure trove in the heart of Central Java
Share this article
Next article

Sunset. Or Maghrib, evident from the Muslim call to prayer echoing through the air. We were sitting in a becak (trishaw) on a tour outside a royal palace, passing by quaint villages while curious children watched us, pointing and laughing.

“That’s the old Kraton, where the previous Sultans used to live,” said our designated trishaw driver, as he enthusiastically pointed out the sights in a mix of Bahasa Indonesia and English. It then dawned on us that seeing tourists wasn’t an everyday occurrence for him, even though we were in one of Yogyakarta’s famous districts, just off Jalan Malioboro. Yet, it was calm. Peaceful.

For most Singaporeans, the first destination that comes to mind when someone mentions Indonesia is Bali. Yogyakarta, however, is a world away from the crowded beaches and touristy streets of on the Island of the Gods — which is a refreshing change, and a more accurate depiction of the diverse country.

More affectionately known as Jogja by locals, the city is still relatively undiscovered by foreign travellers — something we found out when we were approached for photos by Indonesian children who ran to us in droves, selfie sticks in hand. Yogyakarta remains one of Indonesia’s lesser-known treasures, boasting a rich heritage, out-of-the-world ancient monuments, and centuries-old arts of batik, ballet, drama, gamelan, and wayang kulit (shadow puppetry). In fact, it is one of the remaining cities in Indonesia still governed by a sultanate.

While exploring Yogyakarta, one thing that particularly caught our attention was how the city’s identity is deeply rooted in its vibrant culture and heritage, so much so that these aspects are very much present in its cuisine, attractions, and even accommodation options.

Compared to bustling Bali with its plethora of cuisines, Yogyakarta is more known for its traditional Javanese food and age-old cooking techniques. But that’s not to say that it’s short on quality dining options. We indulged in a taste of Central Java at two unique restaurants that offered an authentic dining experience set against backdrops reflective of Yogyakarta’s heritage. One was housed on palace grounds, while the other boasted a breathtaking view of the largest Hindu complex in Indonesia.

Bale Raos, a restaurant located inside the Yogyakarta palace complex, was our first stop for dinner after our sunset becak tour around the Kraton compound. The dining establishment is housed inside two joglos (traditional wooden houses of the Javanese people) and shares the same kitchen as the royal family’s — so diners are essentially enjoying the same meal the Sultan is having for the day.

The royal cuisine was simpler than we expected it to be, with starters such as Sup Timlo (a classic Javanese soup combined with soy sauce and ginger) and mains like Bebek Suwar-Suwir, a sliced duck served with fried pineapple and grated sauce made from ambarella fruit. Both dishes originated from Sultan Hamengkubuwono X, the 10th king of Yogyakarta.

One thing that stood out on the menu was the Beer Jawa, which came as a surprise as alcohol is banned from restaurants in Yogyakarta — what more, one inside a palace. The waitress later explained that it was made up of herbs such as ginger, lime and clove. Its alcohol content? Zero. It tasted similar to ginger tea, but with a milder and sweeter flavour.

We had another unforgettable dining experience at Rama Shinta Garden Restaurant, where we had a decadent dinner with a spectacular view of the Prambanan Temple lit up in the evening sky. We contemplated over a choice of five menus, each with a different soup for the starter, such as Soto Bandung and Sup Ayam Jamur.

Each main dish (be it Udang Goreng or Pepes Ikan), was served with steamed white rice, chicken satay, and sambal goreng, as well as acar and rice crackers. Our favourites were the tender chicken satay and Gudeg, a traditional Javanese dish originating from Yogyakarta and Central Java, made from young jackfruit cooked with coconut milk and buah keluak for two hours in a big pot.

We were too full to do anything else after dinner, but for diners looking to end their evening on a high note, the Ramayana Ballet — a highlight of Prambanan Temple — is staged right next door.

“Why are there so many temples in Yogyakarta?” we asked a guide one day, intrigued by the history of this beguiling Muslim city. We then found out that while the city is predominantly Muslim now, Hinduism and Buddhism used to be Java’s dominant religions for a long period — evident by the presence of some of the most awe-inspiring temples in the world.

These two religions, combined with Indonesia’s traditionally moderate form of Islam, have contributed to an intricate quilt of faiths not just in Yogyakarta, but Central Java as a whole.

For those looking for the path to enlightenment, you might just find it in Yogyakarta. The Borobudur Temple Compounds is a majestic ninth-century UNESCO World Heritage site known to be one of the grandest Buddhist temples in the world.

Located in the Kedu Valley in the southern part of Central Java, it was built during the reign of the Syailendra Dynasty, and became a major Buddhist pilgrimage site. Today, it is a tourist attraction and serves as a reminder that a Buddhist kingdom thrived for around five centuries (until the 10th century) in the heart of what is now Indonesia.

The temple’s historical significance is matched by its architectural grandeur, made all the more dramatic by views of the towering Mount Merapi. The main temple is a stupa built in three tiers, a pyramidal base with five concentric square terraces, a layer of three circular platforms lined with 72 openwork stupas (each containing a statue of the Buddha), and a monumental stupa at the top. The vertical organisation reflects Buddhist cosmology, where the universe is divided into three superimposing spheres: Kamadhatu (desire), rupadhatu (forms) and arupadhatu (formlessness).

“This is combined with the Buddhist ideal of ascending to nirvana, which is a state of bliss or tranquillity,” our guide told us.

Less than a two-hour drive away from Borobudur is Prambanan, the largest Hindu complex in the country. Although both temples have become Yogyakarta’s iconic monuments, they are vastly different. Prambanan was built in the 10th century by King Pikatan from the Sanjaya Dynasty, about 50 years after Borobudur. This is when the Buddhist dynasty (Syailendra Dynasty) in Java was replaced by a Hindu dynasty — thus, the erection of Prambanan signifies the harmony of both cultures, yet a shift in power.

Prambanan’s cluster of temples is characterised by its tall and pointed monuments, typical of Hindu architecture. The central courtyard is dominated by three towering ‘trimurti’ temples — with the largest one dedicated to Shiva (one of the principal deities of Hinduism), flanked by temples dedicated to Visnu and Brahma.

While the Borobudur and Prambanan temples are sights to behold, we were excited to visit the cultural and political heart of this fascinating city; the Kraton (or Sultan Palace), the official residence of the Sultan of Yogyakarta. Effectively a walled city with its own market, shops, batik and silver cottage industries, schools and mosques, this unique compound boasts an architecture which reflects Javanese philosophy and mythological belief system.

The Kraton also houses a museum that features an extensive collection, including gifts from European monarchs, heirlooms of the royal family (including the royal family tree and old photographs of grand mass weddings) and gamelan instruments — giving visitors a peek inside the lives of Javanese royalty.

The Kraton’s inner pavilion becomes a stage where performances are held — namely gamelan on Mondays, Tuesdays and Thursdays, wayang golek (puppetry) on Wednesdays and Saturdays, Javanese poetry readings on Fridays, and traditional Javanese dance on Sundays. We had the opportunity to watch the ‘Bedhaya Jatipurno’, a royal dance often performed at the palace, and marvelled in awe as the dancers executed slow and graceful steps to the beat of gamelan music.

Taking a short horse-drawn carriage from the Kraton, we arrived at the Taman Sari Water Castle, which was once the former royal garden of the Sultan of Yogyakarta. The water castle used to be a resting area, meditation area and hiding place of the Sultan — complete with an artificial lake, lush garden and pool complex. We wandered around the pool complex, which remains as proof of a once flourishing area.

Pointing to a tower overlooking the main pool, our guide said, “The Sultan used to spy on his concubines from that tower.”

The hotels in Yogyakarta all share one thing in common: They blend Javanese culture with modern conveniences, be it in their design and architecture, culinary offerings, or traditional Javanese spa treatments.

One of the most exclusive resorts in Southeast Asia is Amanjiwo, an Aman resort enveloped by the rainforest of Central Java. Serene and tranquil, this is the place to check yourself into if you’re looking to get in touch with your spiritual side.

The resort is a destination in itself, set within a natural amphitheatre where the Menorah Hills rise up nearby and the farmlands of the Kedu Plain are spread below steep volcanoes in the horizon. It also boasts a coveted view of the sacred Borobudur Temple in the distance.

Amanjiwo’s main building is framed by 36 beautiful suites set around the central Rotunda — with each suite featuring terrazzo flooring, high ceilings, domed roofs and a thatched pavilion with a daybed. For those looking to have a direct view of Borobudur, check into the Borobudur Suites or Pool Suites.

Alternatively, the newly-opened Yogyakarta Marriott, located just twenty minutes away from Adi Sutjipto International Airport, provides the perfect in-between spot for business travellers looking to stay someplace more central. The 347-room hotel became our home-away-from-home during our visit, and we found it the ideal gateway to the magical city.

Not only did we get to experience true Javanese hospitality thanks to the highly-attentive staff who went out of their way to make sure we were comfortable, we also got to savour the culinary offerings of the hotel’s three dining venues — all of which stayed true to local flavours, a rarity in modern hotels.

With Yogyakarta still a largely traditional destination, there are a few things to take note of before travelling there. As it is a Muslim-dominated country, alcohol isn’t served (or allowed) in most of the restaurants. Additionally, we advise you to cover your shoulders and knees when visiting heritage sites like temples and palaces as a sign of respect for the local culture.