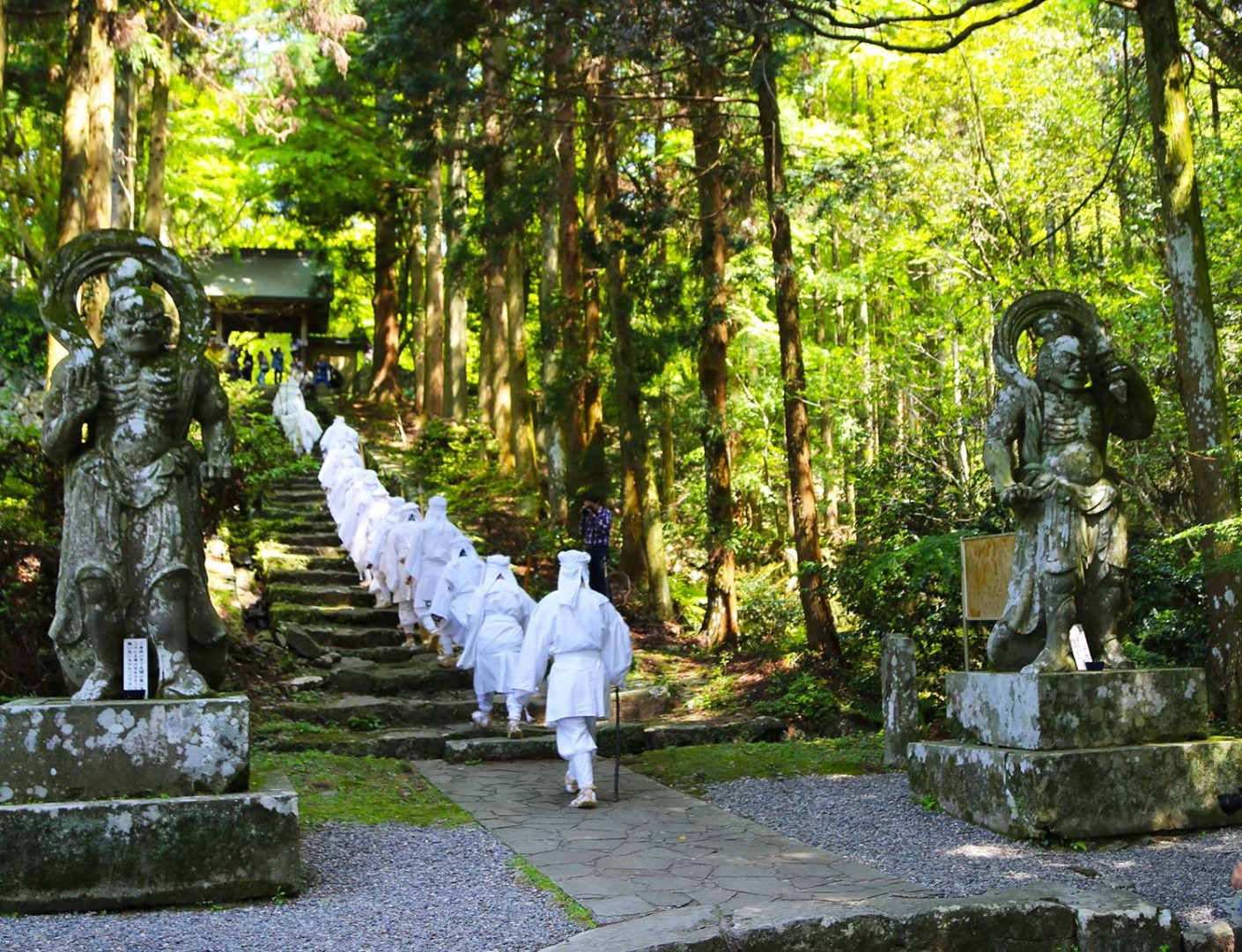 The Kunisaki Peninsula may be a name unfamiliar to most. Yet, although long forgotten by the rest of Japan, it was one of the country’s main centres of Buddhism a thousand years ago. In fact, the remoteness of this corner of Kyushu, located north of Beppu, was the very attraction for early Buddhist monks looking for an area to meditate — resulting in its reputation as the birthplace of Japan’s unique hybrid Shinto-Buddhist religion.

Today, the sprawling Japanese region is a haven of rural life, with some of the country’s most historical temples and ancient artefacts remaining as proof of the Kunisaki Peninsula’s role as one of the greatest centres of the Shinto-Buddhist religion in Japan. The spiritual legacy can still be found in the charming, peaceful temples, wayside shrines and innumerable stone carvings of deities, which have become part of the prefecture’s landscape, along with its tranquil mountains, valleys, fields and villages.

Following in the footsteps of the monks from the eighth century

One afternoon, we found ourselves walking through a forest in Kunisaki just a day after the recent Typhoon Trami that swept parts of Japan, jumping over obstacles such as fallen trees from the heavy rain. To our untrained eyes, this was just an ordinary forest typical of the landscape in the Kunisaki Peninsula — until Hiromi, our local guide, stopped us in our tracks to point of to steps that are carved out on the ground. “This used to be a village for the monks,” she told us.

Admittedly, we would never be in this part of the country if not for Walk Japan, the pioneer of off-the-beaten-track walking tours in some of Japan’s most undiscovered areas. While the path was remote, we were actually walking in the footsteps of early Buddhist monks as part of the five-day, four-night Kunisaki and Yufuin walk.

It is believed that a monk named Ninmon (who may or may not have been fictional) walked the mountainous terrain here in the eighth century, taking shelter in caves, established sacred sites while founding temples and carving more than 60,000 Buddhist images out of stone. His followers then continued his asceticism, which led to the foundation for a form of Buddhist specific to this region of Japan, blending Asian Buddhism with the Shinto religion native to Japan.

We learned more about the unique religion over the course of our five-day journey, where we travelled through the beautiful rural landscapes, tracing monk Ninmon’s footsteps and visiting landmarks such as Usa Jingu, one of Japan’s grandest shrines. Usa Jingu, located at the base of the peninsula, had a big influence in on the Kunisaki Peninsula‘s culture and shaped the local Shinto-Buddhism religion found on Kunisaki.

Another highlight was a short yet steep and treacherous climb up to Itsutsu-ji Fudo, a temple structure carved into the side of a giant rock outcrop. The temple overlooks the towering mountains in the distance and forests that reach far out across Kunisaki to the Seto Inland Sea and beyond to Japan’s first and fourth main islands, Honshu and Shikoku.

“I think, as human beings, walking is a very natural pace for us. We’re designed to walk for extended periods of time. Especially if we keep a comfortable pace. It’s very easy to go through any environment and use all your senses to their full capacity,” said Paul Christie, CEO of Walk Japan, who have lived in the country for the past 30 years. He joined the experiential company as a tour leader twenty years ago after working in Japan and falling in love with the country’s culture and rural areas.

Taking in culture in rural Japan

Indeed, we experienced the warm hospitality of the Japanese one afternoon when we visited the home of a local farmer and her husband, who both welcomed us with open arms. Although her guests did not speak a common language, she was happily chatting with us, prompting Hiromi to translate everything while she filled out cups and plates with green tea and handmade local delicacies.

On a separate occasion, we arrived at Choan-ji, once the most powerful temple in Kunisaki, after walking through the forest around the side of Mt. Yayama. After a two-hour hike through the forest, we finally arrived at the temple, where we are greeted by an elderly Japanese lady, the mother of the temple’s priest, who welcomed us with green tea and roasted chestnuts.

Throughout our journey with Walk Japan in the Kunisaki Peninsula, we retreated into chic yet authentic properties that allowed us to experience the region like a local. On the first night, we stayed at Kaze-no-sato, a small onsen thermal hot spring resort popular with the locals. The resort’s onsen baths are a perfect way to wind down after travelling.

Our second accommodation is Ryoan Fuki-no-to, a Japanese inn set in a rural hamlet adjacent to Fuku-ji temple, one of the simplest and most beautiful Buddhist structures in Japan. During our stay here, we took part in a meditation session with the priest of Fuku-ji temple, which helped us clear our heads before making our way to our last stop, Yufuin, a quaint town nestled in the valleys of Mt. Yufu-dake. The town’s narrow streets are littered with elegant cafes and shops.

As with every other part of Japan, the best time to visit the Kunisaki Peninsula is during autumn (late September to end December), where you can marvel in awe at its temples and shrines that are framed by orange and golden hues.

Fly into Tokyo Haneda Airport via Japan Airlines before taking a connecting flight to Fukuoka Airport, which is just a 1.5-hour flight from Tokyo.

Japan walk japan walking tours kunisaki oita shinto-buddhist
Dewi Nurjuwita
Senior Writer
Dewi Nurjuwita is a travel and design writer who can be found exploring the streets of foreign cities with passport in one hand and a cup of coffee in the other.
Travel Architecture Interior Design