Home > Travel > Destinations > Free diver Hanli Prinsloo: “There are more plastics in the ocean than you think.” 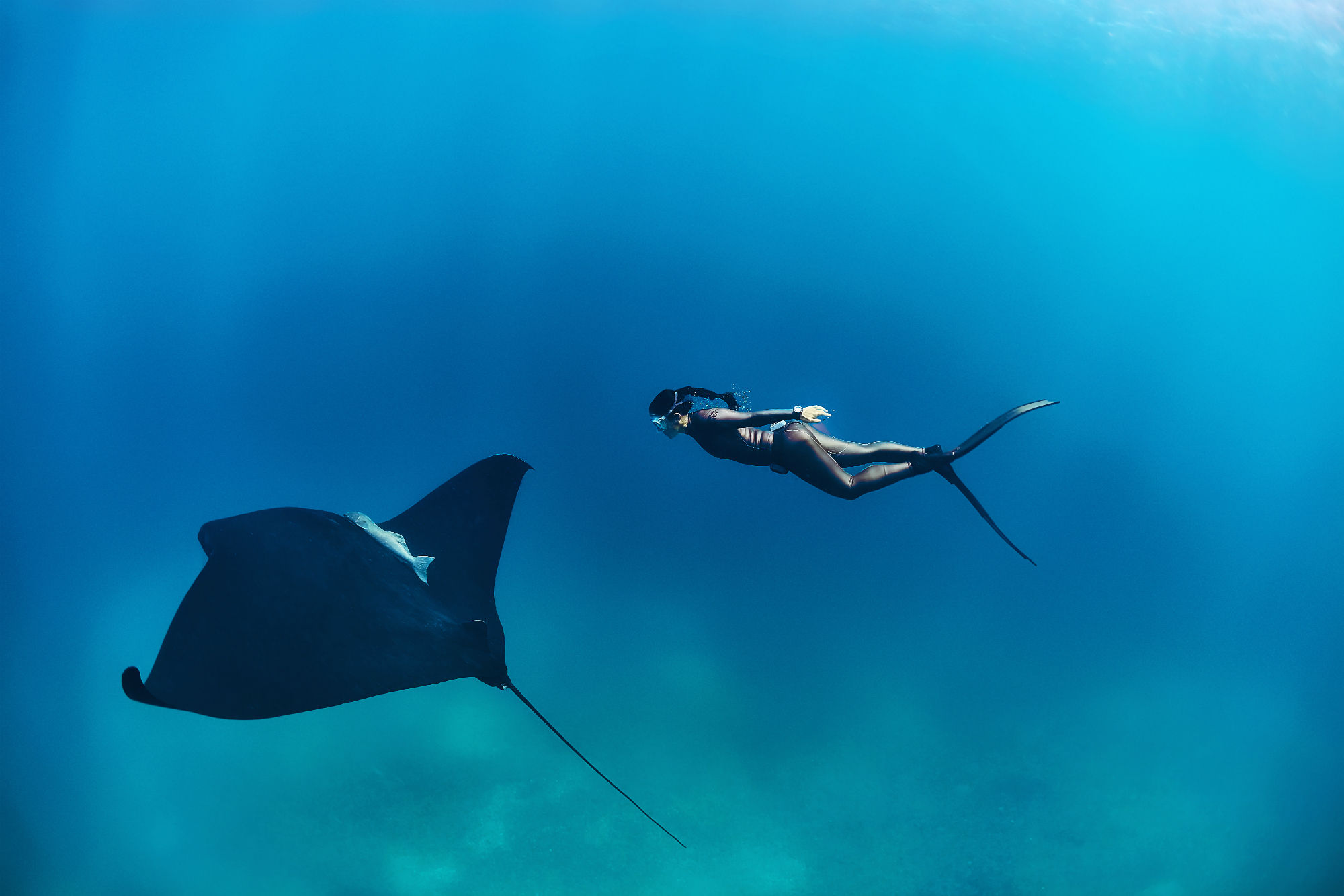 Free diver Hanli Prinsloo: “There are more plastics in the ocean than you think.”

Listen to Hanli Prinsloo talk about her love for the ocean and one would never have guessed that she grew up on a horse farm in Johannesburg, at least a 10-hour drive from the nearest ocean. Her father was a horse breeder and whisperer. From a very young age, she understood the importance of nature and wilderness.

The record-breaking free diver and founder of the non-profit organisation I Am Water speaks in a confident and calm demeanour, but her raging passion for free diving and marine life breaks the monotony of her speech.

Zealously she shares: “It was a cold dark fjord on the west coast of Sweden; I couldn’t see anything, my wetsuit didn’t fit, my mask was leaking and the water was basically pitch black. But once I took one breath and swam down, I knew that was it. It was just quiet. That sense of stillness underwater just gripped me to free diving.”

Prinsloo was at the Jacada Travel’s The Last Departures launch, an exclusive series of set departure trips with her which combine mastering free diving and journeys curated by Jacada Travel across Africa, South Pacific and America.

“When you go on safaris and take part in experiences with elephants and rhinos, you’re very much a visitor watching the animals,” she muses. “In the water, you become part of their ecosystem. They can swim around you in three-dimension and you become part of the relationship, not merely an observer. That’s what I feel is really special about the animal interactions underwater. They notice you, they approach you, and they react to you in a way I’ve only experienced underwater. It’s incredibly awe-inspiring but also very connected.”

The ocean only opened up to her when she started free-diving, a sport she immediately was drawn to when a friend introduced her to during her studies abroad.

In fact, Prinsloo picked up free diving through a friend who introduced the sport to her during her studies abroad. Over the years, she has had her fair share of traveling across the world for great diving adventures.

Prinsloo reveals her most unforgettable experience diving off the coast in Niue, New Zealand. “I was with a group of divers in the water when we spotted a female humpback whale with her baby. We kept our distance, but it was a magical moment when the calf came up all the way to the surface to swim around us. I’ve never actually realised what it would feel like to be in the water with humpback whales that are that interactive,” she reminisces.

Plastic waste in the ocean
“In so many diving spots in the world, there are so many boats in the water. And the whales are feeling quite stressed,” she shares. One of the worst places in the world to dive, in her opinion? — Indonesia, not only because of mass tourism, but because she has seen more plastic than fish in the water, especially in some of the diving places.

So what does she think about single-use plastics, and how they’re contributing to ocean pollution?

On the context of single-use plastics and their detrimental contribution to the ocean, Prinsloo confides that plastics have been a problem to the oceans for many years. However, she believes that this issue has finally reached the public awareness in the last two years. “That’s good because everyone needs to be talking about this,” she iterates.

For someone so connected to the ocean and the creatures that live in it, the problem definitely affects her more than most. “We’ve been to some of the most remote places in the world, and still find plastic waste. What’s really scary is that you can’t find any place on earth anymore where you don’t see plastic in the ocean,” she exclaims. “People don’t always think about the challenges our oceans are facing because it’s so easy to stand on the shore and look out thinking, ‘it’s so big, how could it possibly be threatened?'”

However, that is far from reality. A study by the United Nations Environment Programme in 2016 shows that every square mile of ocean contains 46,000 pieces of floating plastic. Singapore itself sees a monstrous scale of plastic bag wastage — with an average of 1.6 bags used per person per day, twice as many as the average Malaysian uses and thrice the figure in Australia. Additionally, if plastic production isn’t curbed, plastic pollution will outweigh fish pound for pound by 2050.

“In the ocean, it’s not as if plastic waste is coming from boats or coastal communities. Plastic always comes from land; with about 80% of the plastic in the ocean coming down from rivers and landfills. Once it reaches the ocean, the salt water and sun breaks it down into micro-plastics. That’s the real problem,” she shares some more.

Micro-plastics might be a new term for those who aren’t familiar. Yet, it has been a pervasive problem, perhaps even more than the issue of plastic waste itself. Micro-plastics come from a variety of sources, including larger plastic debris that breaks down into smaller pieces, as well as micro-beads (tiny pieces of manufactured polyethene plastic that are added as exfoliants to health and beauty products, such as some cleansers and toothpaste). These tiny particles pass through water filtration systems and end up in the world’s greatest oceans and lakes — coexisting with aquatic life.

“In many places around the world, like beaches in Mozambique, for example, you often see this vague colourful sheen on the sand. When you get closer, you notice that there are small pieces of plastic everywhere. In the ocean, the current bring all these plastic together into whirlpools, and it becomes a cloud of micro-plastics in the ocean. These get eaten by small fish, who get eaten by bigger fish — eventually, it’s in us,” warns Prinsloo. “That’s the real problem with plastic; once it reaches the ocean, it gets broken down and we can’t get it out anymore.”

“For anybody who loves the ocean and wants to be able to still explore it and experience it, we need to be able to change how we behave around single-use plastic,” she continues.

Of course, companies are quickly realising that consumers have become more well-educated. Heavyweights like Procter & Gamble, for instance, have upgraded their packaging to those made of 100% recycled plastics. Earlier this year, Adidas has also collaborated with Parley for the Oceans to repurpose millions of pounds of plastic found polluting the world’s oceans. In Singapore, hospitality groups who value sustainability as their ethos (like Six Senses and Banyan Tree) have banned the use of plastics in the hotel premises.

“I think slowly we’ll start seeing a tipping point happening where plastic just won’t be acceptable anymore. I hope that happens within the next two to five years because if it doesn’t, the ocean will look very different to how it does today,” states the diver alarmingly.

If you think the problem is far removed from our daily lives, you’ve thought wrong. It’s not right to think that the effects of plastic waste in the ocean and micro-plastics only affect marine life; because at the end of the day, it all comes full circle. The micro-plastic found in the flesh of fish end up in our bodies, after all. Prinsloo tells us about her friend, world-renowned sailor and ocean advocate Emily Penn, who recently did a blood test where she found 28 different kinds of toxins in herself — and she leads a healthy lifestyle.

“I feel that if we start realising that plastic isn’t just affecting the outskirts of our lives, but is literally inside ourselves, our behaviour will change very quickly,” she adds.

Jacada Travel hanli prinsloo freediving I am water The Last Departures
Dewi Nurjuwita
Senior Writer
Dewi Nurjuwita is a travel and design writer who can be found exploring the streets of foreign cities with passport in one hand and a cup of coffee in the other.
Travel Architecture Interior Design
Sign up for our newsletters to have the latest stories delivered straight to your inbox every week.