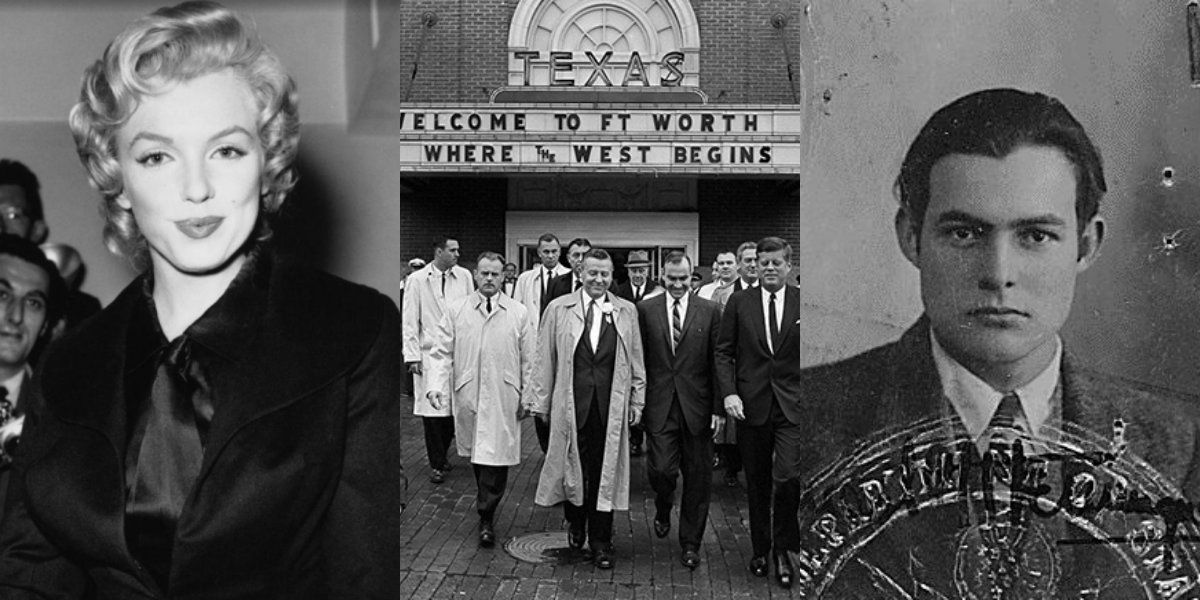 Historical hotels: Slumber with the stars

Travel
Historical hotels: Slumber with the stars
Share this article
Next article

If walls have ears, hotels would have a thousand and one tales to tell. After all, most have been home away from home to famous people from their inception. From the hotel John F. Kennedy had his last sleep-in before his assassination, to the one which provided Claude Monet inspiration behind his famous masterpiece (The Thames below Westminster), we have rounded up four historical hotels with a right old yarn.

The Hotel D’Angleterre has a rich and fascinating history. Before becoming the chic establishment it is today, this hotel in the heart of Saint-Germain-des-Prés has seen many remarkable events. In the late 18th century, the building was once the location of the British Embassy, which contributed to the name of the hotel.

It was also planned to be the location for the signing of the Treaty of Paris, which recognised the independence of America in 1783. However, Benjamin Franklin, the American representative at that time, saw the Union Jack flag and refused to set foot upon the British sovereign territory. An alternative location situated on neutral ground then had to be hastily chosen.

The building has been converted into a hotel for the 21st century, and has hosted monarchs, movie moguls, and some of the greatest writers of all time.

“We were directed to the Hotel d’Angleterre, where a valet de place came to offer his service, and spoke to me ten minutes before I once found out that he was speaking English,” Washington Irving famously wrote in his biography after becoming the first writer to stay in the hotel in 1805.

The writers that followed include American poet Alan Seeger, American writer Sherwood Anderson, Hans Christian Andersen, and Ernest Hemingway. The latter stayed with his wife Hadley in room 14 on December 1921.

The Savoy has had a very glamorous past. Started by composer and theatrical impresario Richard D’Oyly Carte to accommodate tourists who travelled from all over to see the operas at The Savoy Theatre, along with famed Swiss hotelier César Ritz as the general manager, the Savoy was destined for grandeur from the beginning. Ritz didn’t stay long, though. After being sacked for allegedly stealing roughly £250,000 ($445,215) in wine, he went on to open Hotel Ritz the same year – marking the beginning of his own empire.

Artist Claude Monet first came to The Savoy in 1899 and returned twice more in 1900 and 1901, for two months each time, to work on his famous series of views of The Thames – one of them being The Thames below Westminster.

The Savoy Grill itself, housed in The Savoy since 1889, is one of London’s most iconic hotel restaurants. When the hotel first opened, then-manager César Ritz brought in prominent chef Auguste Escoffier to run the kitchen. The restaurant was an immediate success, with a clientele which includes the glitterati – such as Sir Winston Churchill, Oscar Wilde, Charlie Chaplin, Frank Sinatra, Elizabeth Taylor and Marilyn Monroe. The Savoy Grill is now a Gordon Ramsay restaurant, but Escoffier’s influence still inspires the menu today.

Some famous romances were also sparked at the hotel. British artist Vivien Leigh met her future husband, Laurence Olivier, in the hotel’s lobby – while Princess Elizabeth was first seen with Lt. Philip Mountbatten in public at a Savoy reception. When the Princess became the Queen a few years later, The Savoy threw the largest and most lavish Coronation Ball in London.

This historic hotel on Palm Beach, Florida, was first opened by oil, real estate and railroad tycoon Henry Flagler at the height of the Gilded Age. Flagler was the one who started the trend of grand, luxury resorts and hotels on the island, with his first being The Royal Poinciana. He debuted his premier oceanfront hotel, The Palm Beach Inn, two years later (in 1896) – which became popular due to its proximity to the water and the unique location. Guests began requesting the room “down by the breakers,” and thus it was renamed.

Among the first famous people to visit The Breakers was American novelist Henry James, who wrote about the hotel in the final chapter of his controversial travelogue, The American Scene. He described it as “vast and cool and fair, friendly, breezy, shiny, swabbed and burnished like a royal yacht, really immaculate and delightful.”

A series of noteworthy, monied rich families ensued, from the Astors to the Vanderbilts, J.P Morgan to J.C Penney.

The current Breakers was built in 1926, after the original building burnt to the ground. It became the U.S Army’s Ream General Hospital, where thousands of servicemen and women recuperated from their wounds and illnesses during World War II. Prominent visitors include Eleanor Roosevelt and President Harry Truman. More than a dozen babies, known as the “Breakers Babies”, were also born at the hotel from 1942-1944.

After the war, the Breakers Palm Beach was returned to its original owner and has seen A-list celebrities such as Cameron Diaz, Gwen Stefani, Alec Baldwin and Elton John. It has also been the place for celebrity weddings, recently seeing Sofia Vergara tying the knot to actor Joe Manganiello.

One would see a statue of John F. Kennedy stand in a city park outside the Hilton Fort Worth Hotel along Main Street in downtown Fort Worth, Texas. After all, this is where President Kennedy made his last two speeches on 22nd November 1963 before he was assassinated in Dealey Plaza in Dallas – just hours later.

The hotel, where America’s 35th president had his last sleep in, is now a national historic landmark. President Kennedy stayed in Suite 850 of the then Hotel Texas, which has long disappeared during the renovations over the past few centuries – while the hotel rebranded itself several times.

It is now finally Hilton Fort Worth, and the remains of the suite’s original location is now the standard room 808. Once you step off the lifts on the eighth floor and into the corridor, look up and you will see a large photo of him leaving the hotel for Dallas on that fateful day – with the suite where the First Couple spent their last night to the left.

The hotel has a JFK Presidential Suite 1530 now, though – with all 2200 square feet dedicated to JFK’s legacy. The interior decor of the JFK Suite is inspired by the renovation that Jacqueline Kennedy did at the White House during JFK’s presidency.

London The Savoy Rome John F. Kennedy Hotel d’Inghilterra The Breakers Palm Beach Florida Hilton Fort Worth Texas Ernest Hemingway Marilyn Monroe Claude Monet Hotel D'Angleterre
Dewi Nurjuwita
Senior Writer
Dewi Nurjuwita is a travel and design writer who can be found exploring the streets of foreign cities with passport in one hand and a cup of coffee in the other.
Travel Architecture Interior Design
Sign up for our newsletters to have the latest stories delivered straight to your inbox every week.