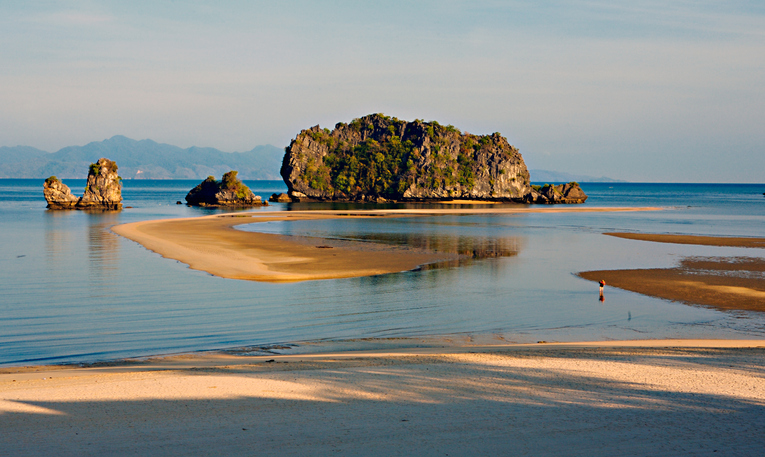 Why Langkawi is one of Southeast Asia’s most underrated destinations

Imagine this: The traditional Sulawesi wooden boat you’re on rocks to the soft lull of the ocean waves while calls of the great hornbill echo from the tropical rainforest in the distance. You touch the glistening, turquoise blue waters surrounding you, creating ripples that almost reach the foot of the limestone karsts towering around the boat. Your guide points overhead, and you watch in awe as a group of eagles soar above while the boat goes further inland into a mangrove park. This same park is the only site in Southeast Asia that has been granted the UNESCO Geopark status.

It would be easy for anyone to believe this is the setting of one of the many undiscovered islands in Thailand. However, this is Langkawi, a cluster of 99 islands off the coast of Kedah in Malaysia.

Mention beach getaways to escape to over a weekend, and most Singaporeans would immediately think of Bali or Thailand — which each boast magnetic qualities of their own. Langkawi, although located just a convenient two hours from Singapore, is often overlooked. In fact, it’s much easier to find tourists from the United Kingdom or Middle East on the main parts of the island.

Langkawi, with its mangroves rich in flora and fauna, a unique culinary scene, and a famous mystical legend that’s been woven into history, is a gem in the Andaman Sea that most frequent visitors would want to keep secret. Its rugged beauty is evident in waterfalls, hot springs and forest parks. There’s a reason why it’s been nicknamed “The Jewel of Kedah”, after all.

Despite the slant towards tourism, many of the islands still make a living by being farmers, fishermen, or entrepreneurs. To explore the culture of the magical island, there’s no better way to do it than renting a car and taking a leisurely drive around the island, experiencing the beautiful countryside and peaceful landscape dotted with padi fields along the way.

In fact, some of Langkawi’s most rustic views can be seen along the road that circles the island. Driving through, you’ll pass by small villages with wooden houses framed by palm trees and children pedalling their bicycles on the unpaved roads.

Another interesting fact about the island is that many of Langkawi’s natural formations are steeped in legend, with each story adding to the mystique and allure of the place. Ask a local on the island, and they would probably be more than happy to share the tragic story of a young lady named Mahsuri, in a tale of love, jealousy, and a curse that was placed upon the island by her for seven generations. Today, although the seventh generation of the island’s inhabitants has long come and gone, the mysticism of this legend can still be felt in many parts of this island.

The island is home to the only site in Southeast Asia that has been granted the highly coveted UNESCO Geopark status, thanks to its array of impressive rock formations surrounded by ancient jungle, vast caves with stalactites and stalagmites, winding mangroves, sea caves and tunnels, wildlife and waterfalls. While over 90 geo-sites have been found in the region, there are three distinct areas that form the Langkawi Geopark, namely the Kilim Karst Geoforest Park, Machinchang Cambrian Geoforest Park and Dayang Bunting Marble Geoforest Park.

Situated on the North-East of the island, Kilim Karst Geoforest Park is made up of predominantly limestone karsts. Its unique landscape of pinnacles, cliffs, caves, hills, and mangrove ecosystems are created by millions of years of erosion.

Those looking to explore the Kilim Geoforest should do so by boat in order to reach places inaccessible by land. Then, walk around and discover some of the unique geological features, including ancient fossil beds and stalactites. The emerald green waters are also home to a huge bio-diversity of marine life, with native birds, including the island’s famous eagles, coexisting above the water’s surface.

The Machinchang Cambrian Geoforest Park located in the north-western corner of the island is known for the Machinchang mountain range, as well as Gunung Raya, a granite mountain at the centre renowned for its Cambrian (first geological period of the Paleozoic Era) rock formations.

Machinchang, Malaysia’s oldest mountain range, predominantly boasts sedimentary sandstone and granite, forming a spectacular landscape that dominates the skyline. For a panoramic view of the island and beyond, head up the thrilling cable car to the summit of Mount Mat Cincang, Langkawi’s second highest mountain. The summit is where you’ll find the famed Langkawi Sky Bridge, perched 700 metres up in between the mountains with views of the sea below.

Here’s an unknown fact: part of the movie Crazy Rich Asians was filmed in Langkawi, more specifically, Four Season’s resort which is tucked away within the 550-million-year-old Langkawi Geopark. The beautiful resort is currently undergoing a transformation by cutting-edge designer Bill Bensley and his Bangkok and Bali-based teams but is still open to guests.

Retreat into one of the 68 Malay-style pavilions and villas with views of the Andaman Sea. The airy rooms, which now reflect Bensley’s modern eclectic style, feature the trademark accent of blues, bespoke artworks and objets d’art, revived teak floors and antique Malay inlays, resulting in a stylish sanctuary.

For an indulgent local dinner, Four Seasons Resort Langkawi is also home to Ikan-Ikan, its in-house restaurant which offers authentic Malay cuisine and fresh seafood prepared and barbecued in front of guests.

Another legendary resort on the island is the prestigious The Datai Langkawi, situated on the Northwest tip of Langkawi, in the Datai Bay Area. The resort recently reopened in September after a 12-month renovation, which saw the resort undergo a complete overhaul of its interiors and exteriors.

In addition to three new Rainforest Pool Villas, a highlight is the five-bedroom The Datai Estate which spans over 3,500 square metres, one of the largest villas of its kind in Asia. Additionally, for those who want to learn more about Langkawi, the resort is also home to a brand-new nature centre which will be run by a team of naturalists and marine biologists led by Irshad Mobarak, the resort’s highly regarded resident naturalist.

When to go
The high season in Langkawi is from January to March, which boasts dry weather perfect for bumming on the beach or various outdoor activities and tours. However, the high season also brings higher hotel tariff, car rental rates and even tour packages, so many returning visitors prefer to visit the island between April to August, which is the mid-season. While there are occasional rains with cloudy sky and thunderstorms, they are short-lived — and helps to keep the temperature down below the thirties.
How to get there
A few airlines fly from Singapore to Langkawi International Airport, which is less than two hours away. Especially with a renovation and expansion, it has never been easier to get to the island.

Travel UNESCO Southeast Asia Four Seasons Langkawi Langkawi The Datai Langkawi Geopark jewel of kedah
Dewi Nurjuwita
Senior Writer
Dewi Nurjuwita is a travel and design writer who can be found exploring the streets of foreign cities with passport in one hand and a cup of coffee in the other.
Travel Architecture Interior Design