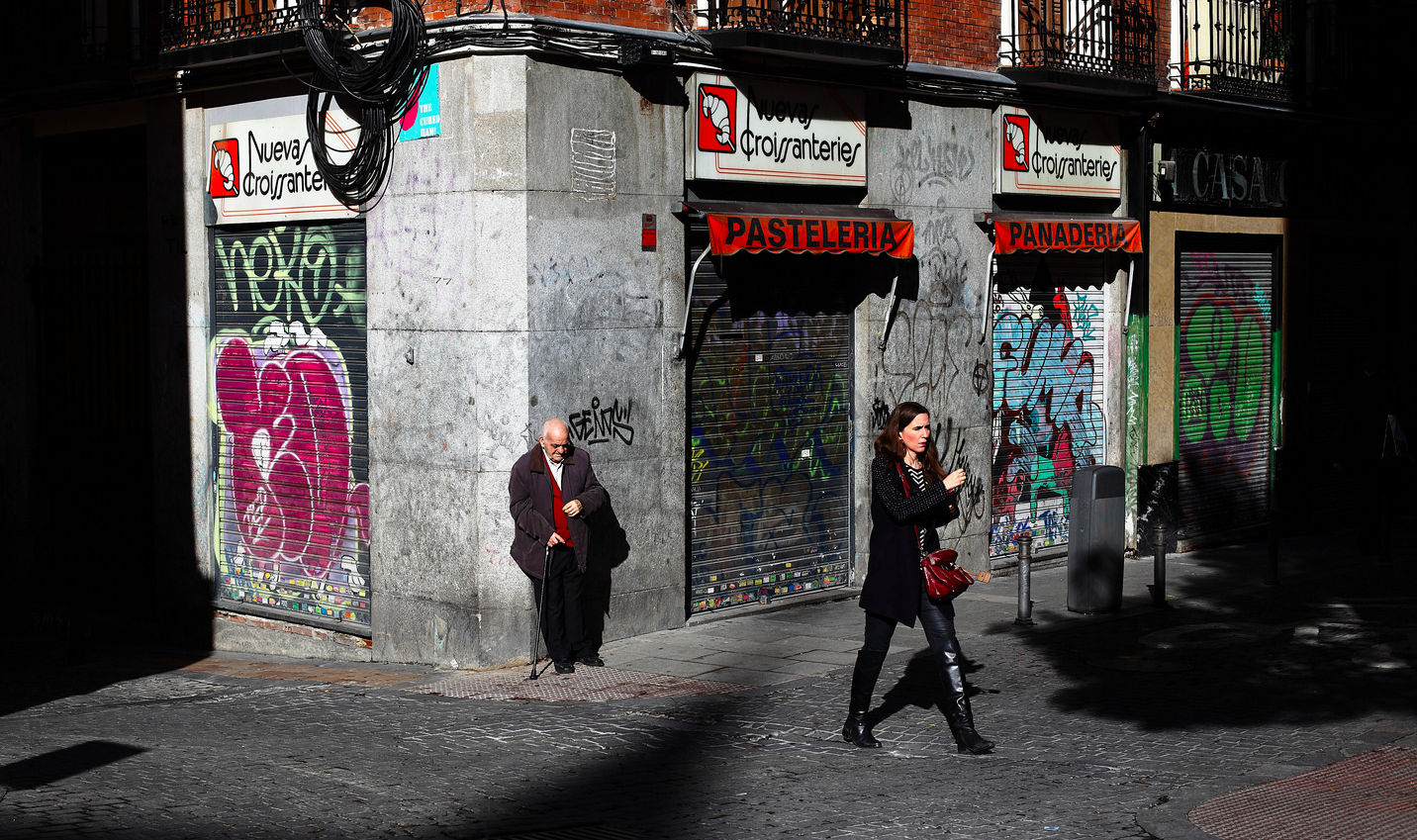 Madrid, Spain’s capital, is one one of the liveliest cities on earth — with a bold energy that is hard to describe in words. This is encapsulated perfectly through Chueca, one of the city’s most colourful barrios (neighbourhood). Once a traditional neighbourhood, Chueca was reborn into the epicentre of modern Madrid — and is now home to the latest trends in fashion and design, as well as some of the most energetic parties and sophisticated restaurants in the city.

Chueca is eclectic, unique and bold. If one had to draw up a comparison to the barrio, the closest would be that it is Madrid’s answer to Soho — although, not quite. The neighbourhood, located north of Gran Via (Madrid’s great thoroughfare), includes the narrow streets of Hortaleza, Infantas, Barquillo, and San Lucas.

Over the past decade, the barrio has seen a gradual transformation from a shabby and rundown neighbourhood into one of the most stylish and exciting districts in Madrid, especially evident in the modernisation of its buildings and facilities. What more, Chueca is the hub of the city’s LGBT scene — and is seeing a new wave of boutiques, bars and restaurants.

It has been said that the heart of a place always accurately epitomises its spirit — and that’s exactly the case with Plaza de Chueca, one of Madrid’s liveliest squares. In the summer, it is surrounded by numerous terraces buzzing with life. Additionally, the metro stop of the same name becomes a regular meeting place for Madrileños.

Spaniards are known to be some of the warmest people, with a famously social way of life — and this is often best represented in its cuisine. Nothing showcases the vivacity of the Spanish culture better than tapas and raciones — and wine too, of course.

This is especially so in Chueca, which has been experiencing a new revival of upper-end bars and restaurants recently — with establishments appealing to all tastes and persuasions. Whether you’re looking to indulge in traditional Spanish tapas or savour innovative modern cuisine, there’s something for everyone.

Tampu Restaurant, helmed by chef Miguel Ángel Valdiviezo, serves up authentic Peruvian cuisine in the heart of Madrid. In fact, its name is derived from a famous Incan structure. Its sleek decor, combined with a magnificent culinary experience while respecting tradition, makes Tampu a stop you shouldn’t miss. Here, certain traditional Peruvian dishes (such as vegetables, red meat, chicken and seafood) are redesigned creatively. Highlights include the ceviche and yuca fries, as well as the tuna belly.

Of course, Madrid is synonymous with tapas — and many tapas bars and restaurants line Chueca’s narrow streets. Stop Madrid, a local favourite, is a wood-panelled old tavern founded in 1929 — where you can savour cold cuts and Spanish cheese tapas to your heart’s content. Highlights include the Iberian ham, Manchego cheese, and spicy sausages as well as canapés and raciones. Additionally, Stop Madrid boasts an impressive drinks menu — with over 40 different wines from around Spain available by glass here.

If you’re looking for a good brunch spot in Chueca, check out Diurno, a modern restaurant famed for its brunch, dinner and cocktails. Stepping into the restaurant, you’ll be greeted with modern yet minimalistic interiors — think spherical lighting, curved seats and angular tables set against neutral, earthy browns with vibrant pops of green.

Diurno boasts a peaceful and relaxed atmosphere during the day, and becomes more upbeat and lively as the night approaches. The cuisine combines international flavours with quality ingredients, creating a gastronomic experience that is hard to come by. The restaurant’s new brunch menu features classic dishes such as the eggs benedict paired with cocktails such as the strawberry mojito — you know, for when you need a break from tapas.

The Principal Madrid is a beautiful boutique hotel that takes over the top floors of a grand 1920s building in the centre of city. The hotel, accessible through a discreet entrance, allows sophisticated jet setters to experience everything Madrid has to offer in complete privacy. The penthouse crash pad boasts sweeping city views, featuring a refined restaurant, alfresco cocktails and a sun-kissed rooftop terrace.

Its rooms are decorated in a monochrome palette featuring glossy black-tiled bathrooms, brass accents and leather lounging chairs. Its creme de la creme is a suite on the fifth floor, which is decorated with comfortable reading nooks and showers equipped with massage jets.

Another hotel we love is Circulo Gran Via Madrid. Part of Marriott’s Autograph Collection, the hotel is a sophisticated adults only establishment located in the heart of the city. The building it is housed in was inaugurated in 1924, and was once home to The Circle of Trade and Industrial Union of Madrid.

The hotel is located in a prime location, perfect for those looking to discover the city’s main attractions — such as Plaza Mayor, Puerta del Sol and the Royal Palace.

Of course, a trip to Spain isn’t complete without visiting its numerous food halls. Mercado de San Antón is a remodelled venue which has recently been given a makeover. The building is now a prime leisure venue with an art gallery and a terrace restaurant where you can enjoy a lively aperitif, while still incorporating the traditional market with numerous gourmet food stalls.

A 12-minute walk from Chueca centre is Almudena Cathedral (Cathedral of Madrid), located in front of the royal palace. Its history dates back to 1561, when the capital of Spain was transferred from Toledo to Madrid. King Felipe II wanted a cathedral for his new capital and plans were discussed as early as the 16th century, but construction did not begin until 1879. In fact, the cathedral was based on the site of the old mosque of the Mayrit Muslim.

The cathedral’s bright interiors features Neo-Gothic style that is uniquely modern, with chapels and statues of contemporary artists in heterogeneous styles — ranging from historical revivals to “pop-art” decor. Highlights of the cathedral include the Neo-Romanesque Crypt, the oldest section of the Cathedral which was built in the 19th century. The crypt houses a 16th century image of the Almudena Virgin. After which, visit the cathedral’s museum, which explains the history of the church and the archdiocese of Madrid. You can end your visit by enjoying a magical view of Madrid over its dome.

Madrid is the LGBT capital of Spain and Europe — and this all started in the 70s in Chueca, when the rundown barrio bloomed into an area home to the freedom rights in Spain. Since then, Chueca is awash with colours of the rainbow every June and July, when Madrid’s pride parade takes place. The parade celebrates diversity and freedom through an extravaganza of open-air concerts, cultural events, conferences, sports, and outdoor parties each year.

While it pays homage to Madrid’s rich culture and heritage, Chueca is a barrio that is constantly moving forward — with an exploding culinary scene, boutiques with the latest trends and some of the most vibrant parades. Home to some of Madrid’s most daring and creative souls, Chueca is definitely not for the faint hearted.

Spain Madrid neighbourhood guide chueca madrid neighbourhood stop madrid gran via neighbourhoods in madrid restaurants in madrid tampu restaurant diurno almudena cathedral
Dewi Nurjuwita
Senior Writer
Dewi Nurjuwita is a travel and design writer who can be found exploring the streets of foreign cities with passport in one hand and a cup of coffee in the other.
Travel Architecture Interior Design
Sign up for our newsletters to have the latest stories delivered straight to your inbox every week.