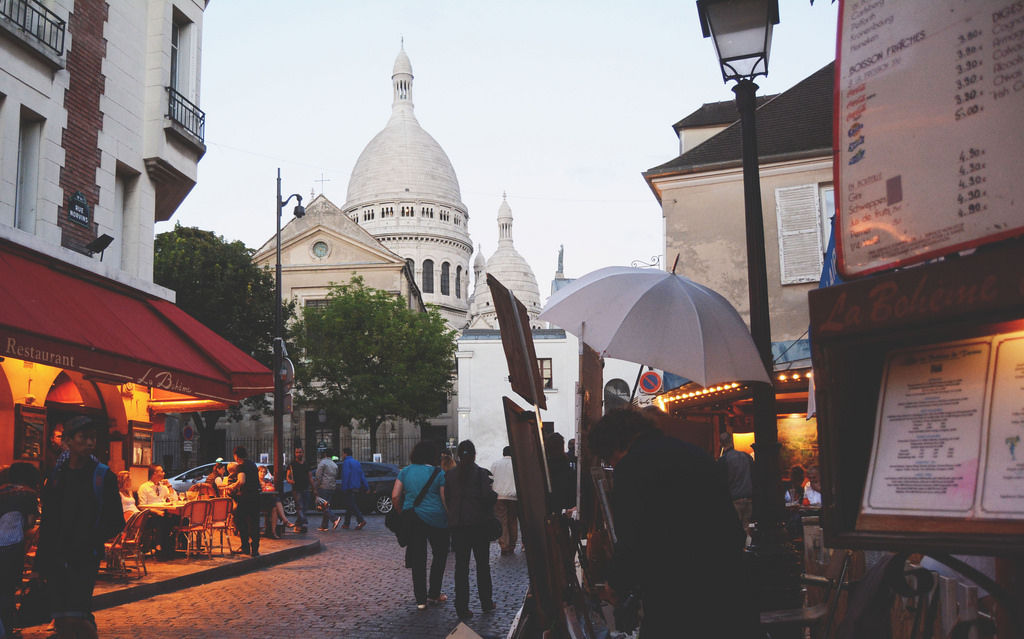 The mention of Montmartre might immediately bring up images of Sacré Cœur basilica and Moulin Rogue. However, Montmartre’s allure lies in its intricate back streets, away from tourist central. If you have ever imagined a classic Parisian neighbourhood that is depicted in the movies, Montmartre is that.

Located in the 18th Arrondissement of Paris, this hilltop Parisian village has captivated artists since the Belle Époque. What used to be a haven for artists, writers and musicians seeking solitude, from Picasso to van Gogh and Henri de Toulouse-Lautrec, still retains its charm and rich history. The neighbourhood still has a bohemian spirit that lives on in the form of old churches, hidden squares, quaint bakeries and inspirational ateliers.

Art in its veins

Considered by locals and travellers alike as the heart of Montmartre, Place du Tertre is an open-air gallery packed with colourful artists’ stalls and showcases the creative spirit of the neighbourhood. What used to be the main square of the village and attracted artists such as van Gogh, Picasso and Modigliani was then known as “The Artist’s Square.” It’s located on the hill approximately 300 metres from the Sacré Cœur basilica, so you definitely can’t miss it.

“I know we will make it through the Bateau Lavoir. There we were truly happy, we were considered as painters and not as curious animals,” Picasso once wrote. He was talking about the Bateau Lavoir, where the 20th-century painter created some of his famous works. The building used to be where artists’ studios were early in the 20th century, but burnt down in a fire in 1970. What stands on the same spot now is a facade that, like the original building, houses artists and their studios.

After wandering about the cobbled streets and soaking in the creative spirit of Montmartre, grab a croissant or baguette at one of the many Parisian bistros and bakeries. Boulangerie Raphaëlle is a bakery that has won the award for the best baguette in Paris – and the whole world knows that nobody makes better baguettes than Parisians.

The very Parisian neighbourhood has been the setting of many movies, including Midnight in Paris and Amélie. The latter has scenes filmed at Cafe les Deux Moulins, whose name is French for “Two Windmills”. If you’re expecting it to be a tourist trap, you’d be surprised to find out that it looks like just any ordinary French bistro – well, except for the Amélie poster on the wall.

At the back of Montmartre hill, Soul Kitchen is a humble coffee shop and restaurant that makes homemade cakes, fresh quiches with seasonal organic ingredients and fair trade produce in a cosy atmosphere. The lovely restaurant features rustic tables and worn-out tile patterns, giving off a Bohemian vibe.

Maison Souquet is a boutique design hotel in Paris, perfect for the Bohemian spirit of the neighbourhood. It occupies a Parisian townhouse and is decorated in a Belle Epoque theme, a tribute to its past as a pleasure house. The lavish yet elegant interiors were designed by French architect and interior designer Jacques Garcia.

What was once a meeting place for the creative community of Paris in 1911 has gone through a major restoration, and now allows present-day artists and history buffs to take residence. Le Terrass Hotel has been decorated to look like lodges of artists, with studio lamps, cinema director’s chairs, wooden parquet flooring, Parisian metro tiles and stacked leather suitcases.

Besides being the arts hub of Paris, Montmartre is also known for its many world-famous cabarets that opened up by the end of the 19th century. Namely, Le Chat Noir, Moulin Rouge and Lapin Agile. The latter, a pastel-coloured building, was a hangout for struggling writers, poets, musicians and artists – such as Dorgelès, Clemenceau, Picasso, Renoir and more. Today, it continues to be a place for emerging talents.

Today, Le Chat Noir has been transformed into a boutique hotel with the same name, while Moulin Rogue is still the number one-rated show in Paris, with cabaret shows that are sold out every night. Just walk on Place Blanche along Boulevard de Clichy at the foot of Montmartre and you will spot its signature bright red windmill. Inside, enjoy an extravagant evening while watching the iconic “Féerie’ show at Paris”, where you will see elaborately-dressed showgirls dazzle the audience with drama, dance and music.

Montmartre is for aspiring artists and appreciators of art alike. Although it is said to have lost its artistic charm due to flocks of tourists in the neighbourhood taking yet another photo in front of the magnificent Sacré Cœur, that is certainly not the case. All it takes is a walk down its back alleys, where you can still get a whiff of the 19th-century bohemia and artistic spirit of the same Montmartre Picasso fell in love with.

Art Paris Europe City guide Moulin Rouge Montmartre neighbourhood guide Amelie Cafe les Deux Moulins Cafe Miroir Soul Kitchen Le Terrass Hotel Maison Souquet
Dewi Nurjuwita
Senior Writer
Dewi Nurjuwita is a travel and design writer who can be found exploring the streets of foreign cities with passport in one hand and a cup of coffee in the other.
Travel Architecture Interior Design
Sign up for our newsletters to have the latest stories delivered straight to your inbox every week.