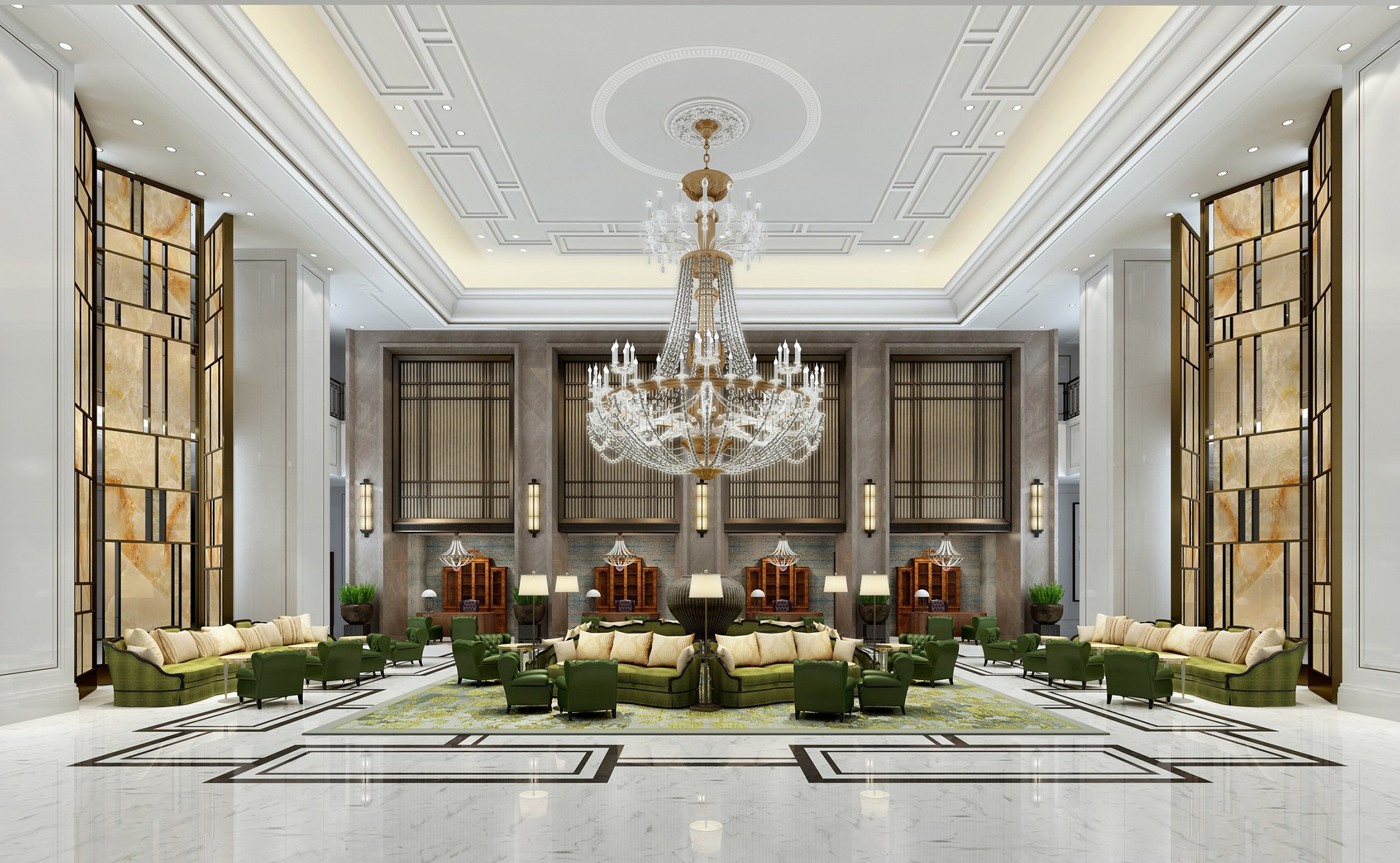 Shanghai, China’s most populous and trendiest city is no stranger to luxury. This is where one of the world’s most expensive restaurants is located (three-Michelin-starred Ultraviolet by Paul Pairet charges upwards of US$900 or S$1220 per meal) and the opening of upscale shopping malls like the Shanghai Plaza 66 Mall doesn’t seem to be slowing down.

Of course, talk of China’s economic rise and propensity for all things gilded is stale by now, yet a bumper crop of luxury hotels in Shanghai has been opening in rapid succession this year. This spans the hospitality genre — from the so-hip-it-hurts W Hotel brand with its DJ decks to the stately St Regis in Jingan with their army of butlers.

What unites them is their distinct identity – a clear break away from the upscale yet austere business hotels that dot the city.

“China has seen an incredible increase in tourism, particularly among luxury travelers, and we are excited to meet this demand,” says Stephen Ho, Chief Executive Officer, Greater China, Marriott International on the opening of the The St. Regis Shanghai Jingan.

Other property brands like W Hotels however indicates that domestic Chinese travellers occupy the bulk of the rooms – up to 80 per cent of all bookings sometimes. That’s no surprise given China’s immense geographical and population size as they would after all want to visit one of their own trendy cities. In fact, W Shanghai alone is seeing strong demand from the staycation crowd.

“Over the weekends, almost 60 per cent of the customers are Shanghainese,” says Anthony Ingham, Global Brand Leader of W Hotels Worldwide. “[These are] generally the millennials. They come in their Rolls Royce and sneakers so it’s quite interesting.”

Indeed, In June this year, management consulting firm McKinsey reported that Chinese luxury spending is set to double to US$147 billion (S$199 billion) by 2025, which represents a whopping 37 percent of the global luxury market.

Either way, whether you’re flying into the city for business or pleasure, these luxury hotels in Shanghai will sure have something in store for you. Here’s more. 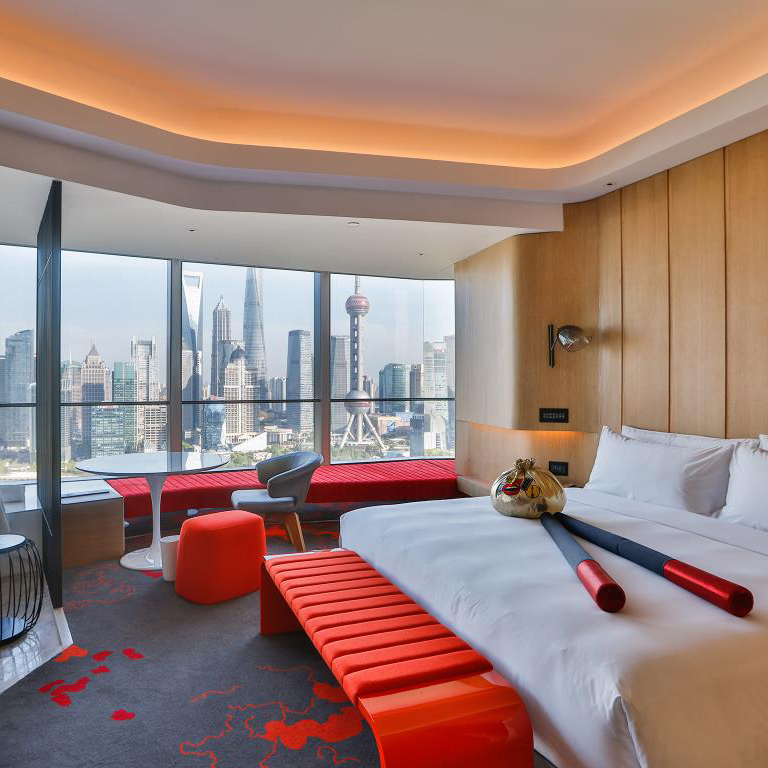 If it’s energy you’re looking for, then it’s energy you’re going to get at W Shanghai – The Bund, complete with an urban Chinese vibe. The usual W Hotel suspects are there, from Woo Bar to Yen. The property is designed with its locality in mind so expect a cute silver cushion in the shape of a xiao long bao – the city’s culinary specialty flanked by a pair of giant chopsticks sitting neatly on the bed. If you’re one to squeeze in a few reps in between meetings or that holiday, head to the gym; W Shanghai – The Bund has our vote for its comprehensive working out facilities. 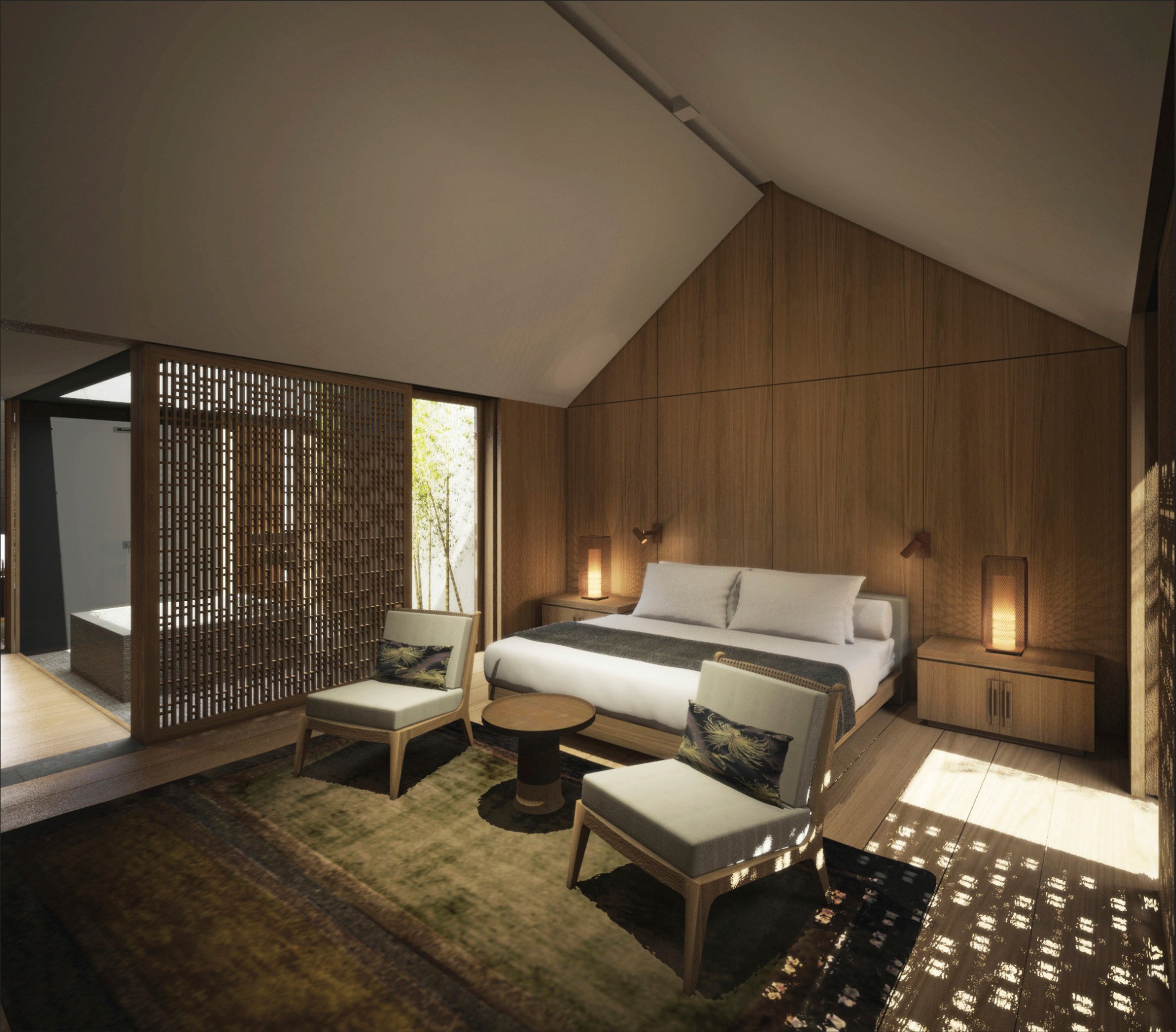 If you were in the city for work and looking for a much needed respite, then skip the urban hotels and check yourself into Amanyangyun, a hotel situated in actual Ming and Qing dynasty houses restored with luxury comforts. Expect spaces surrounded by luscious greenery and décor that takes on earthy hues. The entire property is geared towards wellness and peace of mind so be sure not to miss the expansive 2,865-square-metre Aman Spa with services that draw from the rich knowledge of Chinese Traditional Medicine.

Amanyangyun Shanghai, is slated to open sometime this year. Its location hasn’t been disclosed at press time. Stay tuned for updates. 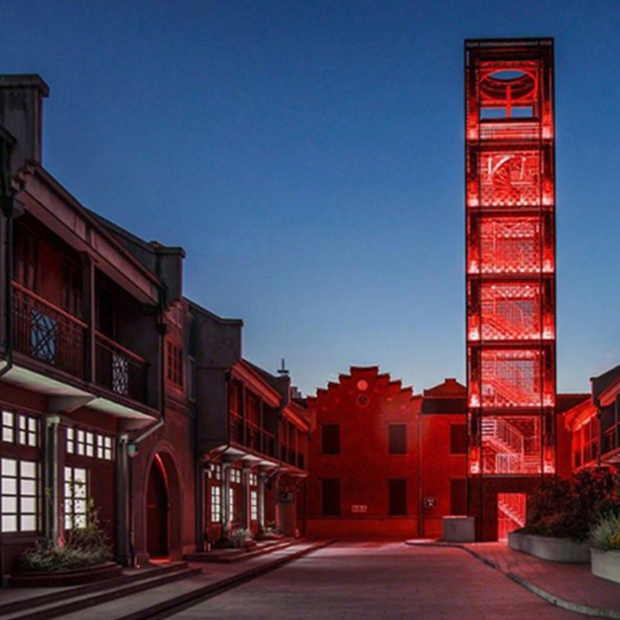 Culture takes centre stage at Capella Shanghai, a tastefully restored properly located within the cultural preservation zone of Xuhui District. The buildings were built in the 1930s by French real estate company Foncière et Immobilière de Chinein so expect a space where Shanghainese design elements embrace French architectural styles. The hotel has a library for culture buffs while two of Shanghai’s most important landmarks: the city’s only surviving Ming Dynasty-age Yu Gardens as well as Longhua Temple, which is the oldest temple in Shanghai are just a short distance away. 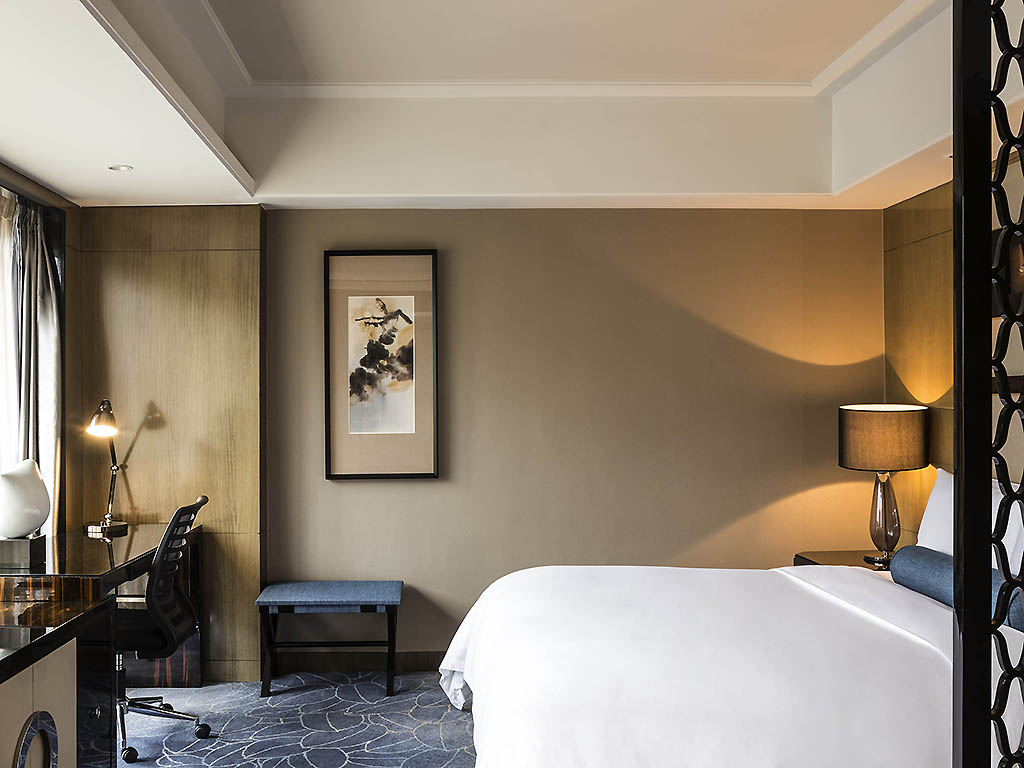 Time is of the essence at the Pullman Shanghai and if you have business to get done in the Central Business District of Jing An, this hotel would rise to the occasion. It’s located in the CBD itself and sits just next to the subway station for occasions when traffic jams are not an option. Private meetings can be held at the executive club and lounge up on the 27th floor while upscale Chinese restaurant The Century can be the spot where you hold your business lunches. 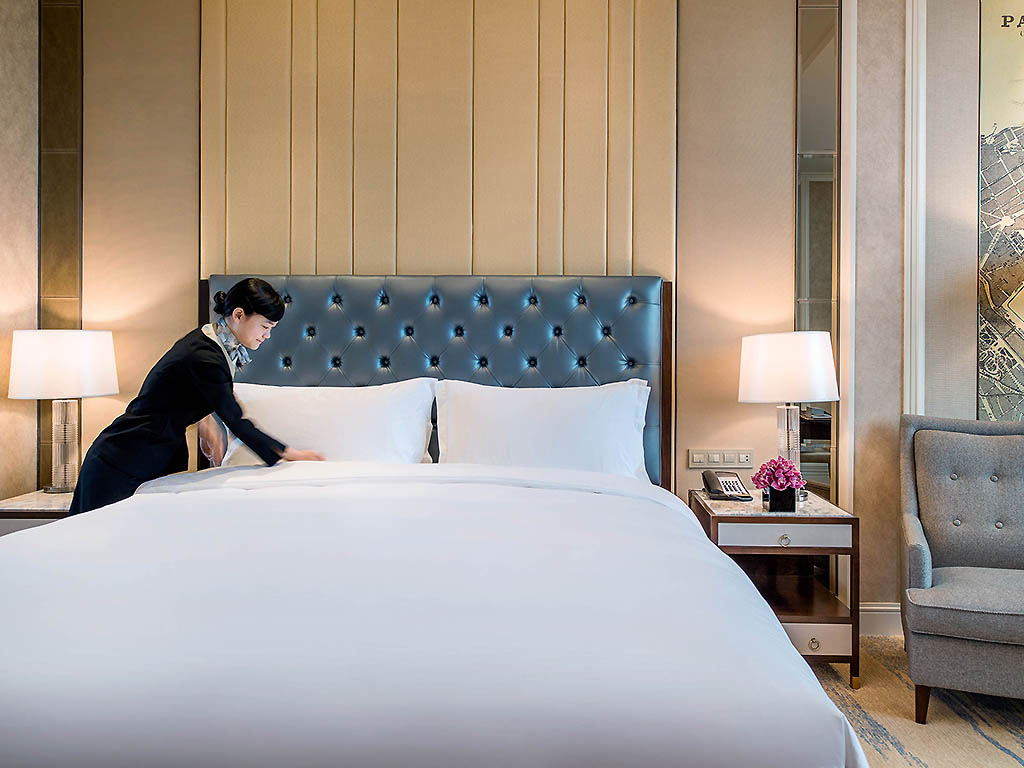 The Sofitel name seems to have huge cache in Shanghai as the Hongqiao property is the third to open in the city, and the 21st in Greater China. Retreat into one of its 354 rooms, each decorated with its trademark Parisian flair or indulge in any of its five food and beverage spots ranging from Takara for its Japanese cuisine or Ocho for Spanish tapas and Le Chinois for Cantonese classics. 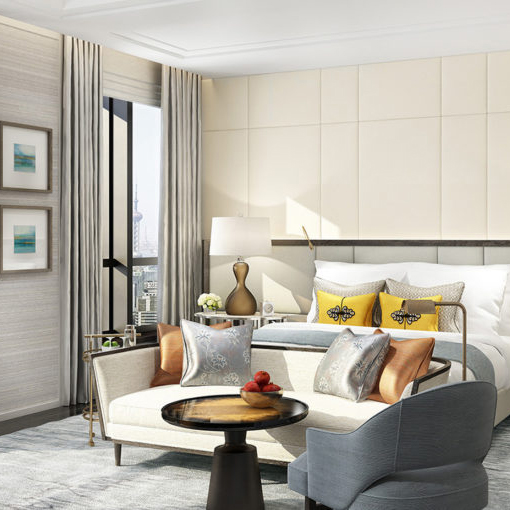 Few hotels have the last word on luxury and heartfelt service as much as The St Regis and the brand has just opened along Beijing West Road this year. There are 491 rooms, 67 of which are suites and all of them come with plush bedding that sports 300 thread count sheets and a walk-in closet. As always, the brand’s signature butler service is on hand to help you pack and unpack, press your garments as well as keep you fueled with coffee any time of day.