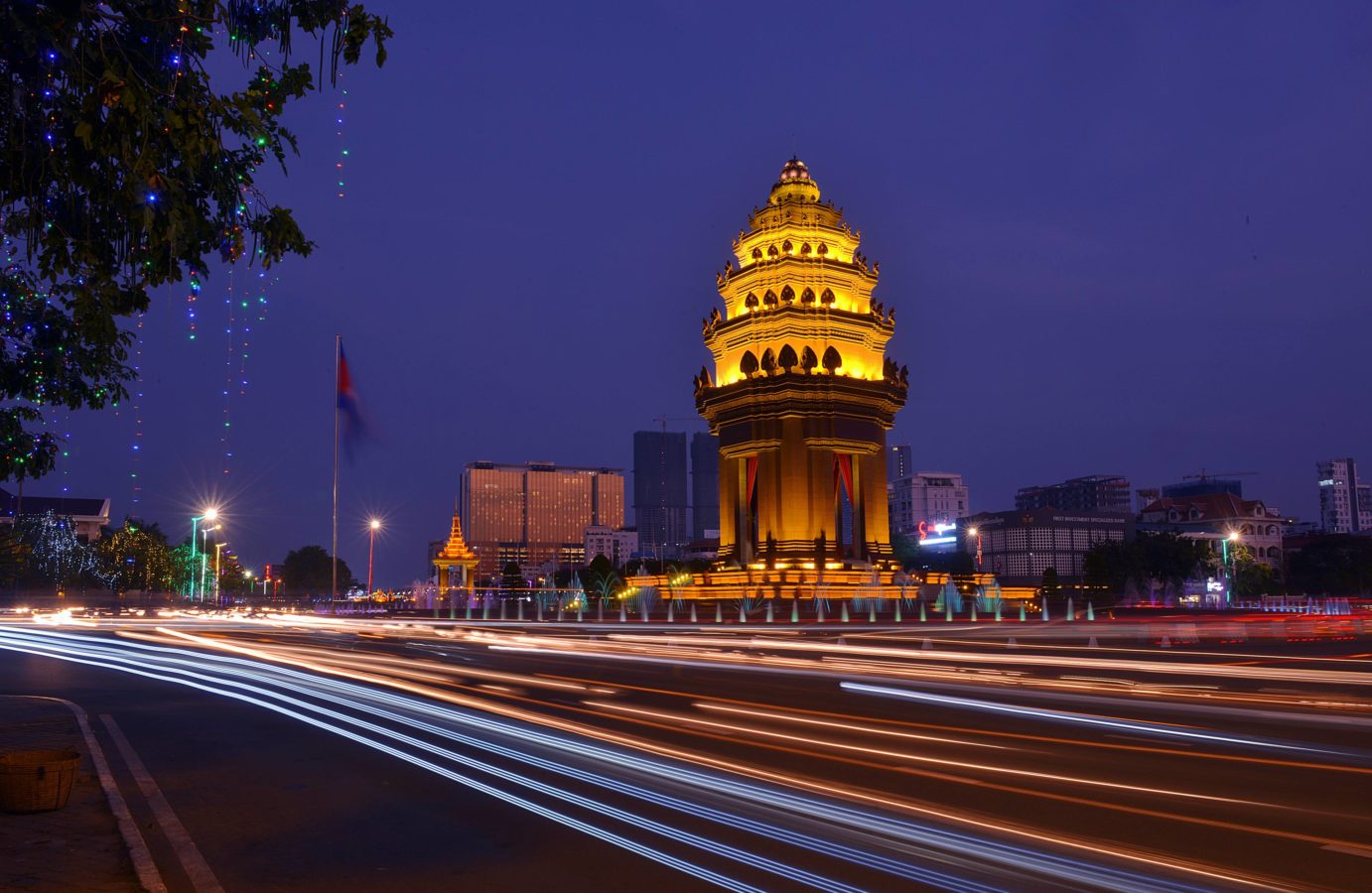 Travel
What to eat, see and do in the boisterous city of Phnom Penh
Share this article
Next article

It’s difficult to think of Cambodia without conjuring up images of Siem Reap.

Yet Phnom Penh, Cambodia’s capital city has much to offer and often defined by its past under the Khmer Rouge. The city’s reputation was tarnished by the impact of war and revolution, leaving its nickname ‘Pearl of Asia’, thoroughly covered in grime and dust. However, the city has since sought to reclaim its nickname to become one of the hippest capitals in Southeast Asia, complete with pockets of art and creativity, complete with a bustling food scene.

You might also like…
Travel
Step into an urban oasis at one of these luxury hotels in Manila
Travel
These idyllic resorts in Siargao, the Philippines will make for an unforgettable escape

Be warned: a visit here can be disconcerting for first-time travellers. Motorcycles meandering through traffic and pedestrian lanes, traditional markets exuding a cacophony of smells, and the noise of the hustling crowd can be a little too much at times. Yet, this is what makes Phnom Penh so incredibly charming. Read on for our guide to what to do, where to eat and where to stay in this enigmatic city.

How to get here: Travel by Singapore Airlines (via Silk Air), for a direct flight from Singapore’s Changi Airport to the Phnom Penh International Airport. Other carriers like Vietnam Airlines, Thai Airways and Malaysia Airlines will require an extra stop before arriving in Phnom Penh.

Everyone knows to visit the famous few on their first visit to Phnom Penh: The Royal Palace, the royal residence of the king of Cambodia, Wat Phnom, the historic Buddhist temple and the Independence Monument, built in 1958 to memorialize Cambodia’s independence from France. It is here where you can see sandstone-shrouded monks strolling along the streets, past glistening temples and through wet markets. For first-time visitors, these are important landmarks that should not be missed as they serve to educate travellers about Cambodian history.

Boeung Keng Kang, more fondly known by its acronym, BKK, is Phnom Penh’s very own stylish neighbourhood. This area is mainly frequented by expatriates due to its neat selection of third-wave coffee shops and eco-friendly boutiques, which can be found around Golden Street and Langka Lane. Maison Eric Kayser serves up a good range of French-inspired baked goods and snacks, making it a favourite amongst the crowd.

To the south of the city is Factory Phnom Penh, a three and a half hectare former Levi’s factory that has been completely gentrified since 2018. It is here where you will find a buzzing hub of the region’s most creative minds: from entrepreneurs to artists alike. The mixed-use space is also home to four art galleries with rolling exhibitions year-round, including the country’s largest contemporary art space, Kbach. If you’re not convinced, there’s also a theatre, a cinema, restaurants and a brewery to keep yourself entertained for hours. We recommend coming down during the weekends to really immerse yourself in the buzzing atmosphere.

You might also like…
Travel
What to eat, see and do in the energetic city of Ho Chi Minh
Travel
Check in: Get whisked away to Phum Baitang, a luxury resort within a village

For a taste of Fish Amok

A visit to Cambodia is only made complete after a taste of Fish Amok. There are many places to try the country’s national dish, but one place that is high on the list is Frizz Restaurant. The fish is first marinated in the kroeung paste (a mixture of shallots, red chillies, kaffir lime leaves, turmeric and lemongrass that is pounded with a mortar and pestle) and coconut cream then wrapped up in banana leaves and steamed. The result is a curry paste that is almost mousse-like, which masks the muddy taste of the freshwater fish.

Start your meal with some Lap Khmer

The Sugar Palm serves classic Cambodian fare in sharing plates for a communal dining experience for guests. One of their most popular dishes is Lap Khmer, a lime-marinated Khmer beef salad. The meat is sliced paper-thin and then cured ceviche-style with lime juice. Before it is served, it is mixed in with a combination of herbs and sauces such as shallots, fish sauce, garlic, lemongrass, mint, basil and green pepper. The dish is a beautiful blend of flavours that highlights the fresh ingredients used, creating a refreshing appetiser not to miss.

Have some Bai Sach Chrouk for breakfast

Pork with rice, also known as Bai Sach Chrouk, is the quintessential Cambodian breakfast meal. The thinly-sliced pork is first marinated in either coconut milk or garlic, then slow-grilled over hot coals. It’s then gently placed on a bed of rice, together with a side of pickled cucumbers, daikon radish and ginger. One of Cambodia’s leading restaurants, Malis, serves a generous portion of Bai Sach Chrouk alongside a complimentary croissant, bottomless Chinese tea and a sweetcorn dessert, all a meagre S$6.

You might also like…
Travel
Cambodia’s luxury footprint is set to expand with another Shinta Mani hotel
Travel
Check in: Park Hyatt Siem Reap, a sanctuary in the heart of Cambodia

Baitong Hotel & Resort Phnom Penh is situated in the fashionable neighbourhood of BKK, making it an urban oasis for any traveller looking for some respite. The hotel is fashioned in a sleek, modern design, making clever use of greenery to contrast the greys of the buildings and its clean white walls. Each of its 106 beautiful rooms are fitted with state-of-the-art amenities and outfitted with a streamlined design inspired by elements of nature.

The rooms may be great, but what draws most guests here are the two stunning swimming pools and the rooftop bar. The water in the jacuzzi on the third-floor cascades into an infinity pool on the second floor, creating an artificial waterfall that is not commonly seen in hotels. The hotel’s very own bar, Lantern Rooftop Bar, is located on the 6th floor of the modern establishment. Here, sip on your favourite cocktail while taking in the extraordinary views of the sunset and the city lights.

Get a home away from home experience at La Rose Suites, located just a stone’s throw from the Independence Monument. Its architecture is inspired by French Indochina and the grandeur of Angkor Wat, making it one of the most beautiful properties around. La Rose Suites has 68 spacious colonial-style rooms that are spread across two buildings, complete with modern amenities and plush four-poster beds. Most suites overlook the hotel’s own lush tropical garden and salt-water swimming pool, and all guests will receive a complimentary one-hour traditional Khmer massage.

Peckish guests can find themselves at The Banana Tree restaurant, which serves a nice selection of Khmer dishes, and other international plates. If you’re up an interesting experience, dinner at The Banana Tree includes an Apsara dance performance from 7 pm to 9 pm daily, which includes a two-hour traditional dance show that brings ancient Khmer culture to life.

Not everyone who comes to Phnom Penh wants a piece of the bustling city life. The Bale Phnom Penh’s languid riverside location is a great option for those looking to get away from the crowd. Upon arrival, walk through a path suspended over a dark-tiled pool, passing by stone buddhas against the backdrop of greenery-draped walls. The hotel was designed to create the zen state of mind, highlighting what it means to live in holistic luxury.

Each of the 18 suites come with views over the majestic Mekong River, and are immaculately fashioned with minimalist furnishings infused with local Cambodian artefacts and fabrics. Spend your days tanning by the 30-metre outdoor pool, take part in a Khmer cooking class, or even a tour around the area. Guests are entitled to a 24-hour butler service to arrange these activities.

For other luxe hotel options in Phnom Penh, we’ve compiled some in another post here.

Cambodia Phnom Penh cambodia guide
Jocelyn Tan
Writer
Jocelyn Tan is a travel and design writer. She's probably indulging in serial killer podcasts or reading one too many books on East Asian history. When she actually gets to travel, you can find her attempting to stuff her entire wardrobe into her luggage. Yes, she's a chronic over-packer.
Travel Design