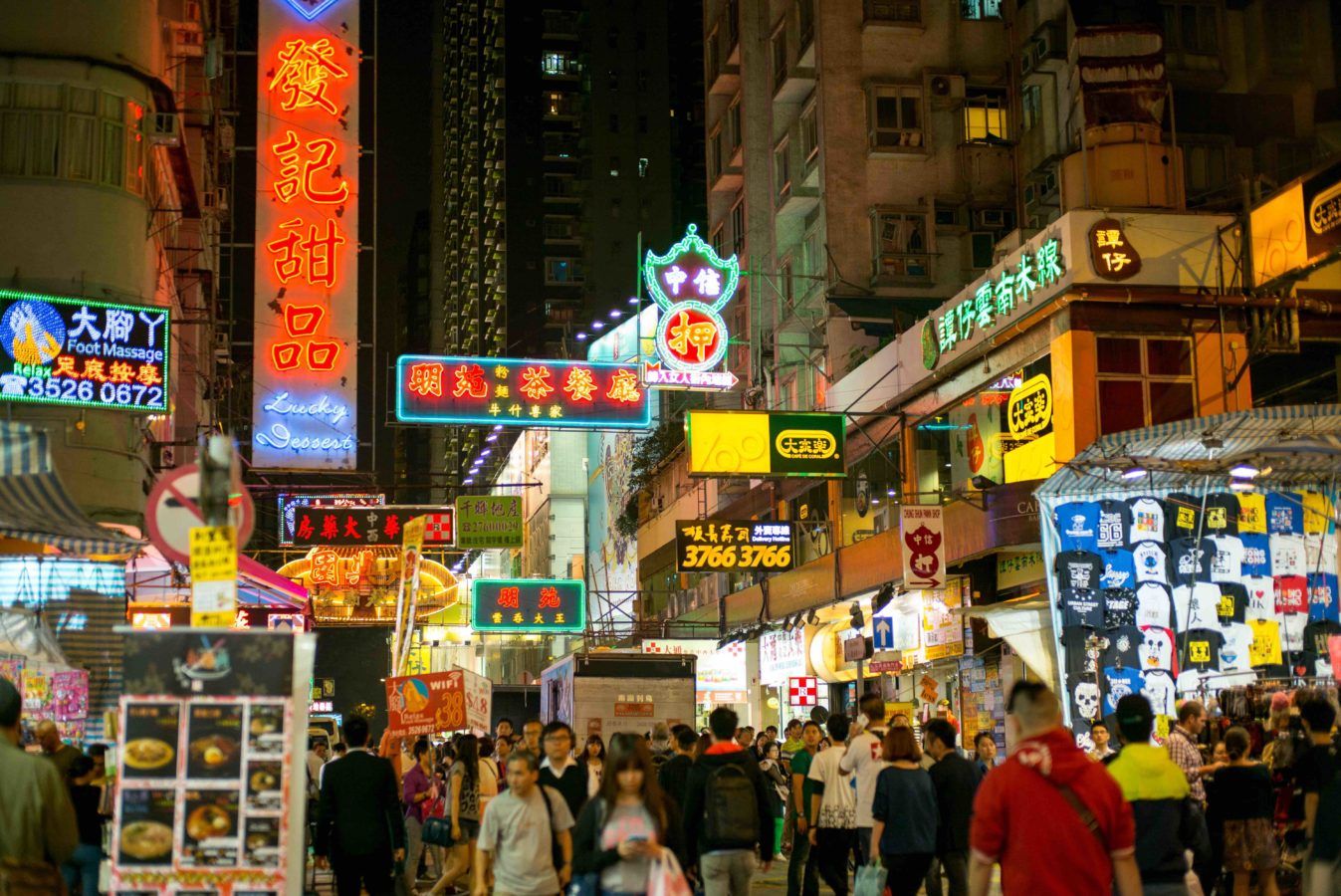 What to eat when you’re in Mong Kok

Mong Kok, a bustling neighbourhood in Kowloon is best known for its Ladies Market (where souvenirs, bits and bobbles abound).

But it’s also a mecca for some of the best local and Instagram-worthy foods in Hong Kong.

To get the most out of your time, Mong Kok is best visited from late afternoon to evening, when you’ll be able to witness the transformation during the early evening hours with rows of bright neon signs coming alive.

Amongst the cacophony of honking cars, noisy hawkers and peddlers, you can explore the streets and alleyways to savour cheap and delicious eats that run the gamut from Japanese lava cake soufflé pancakes to Michelin-recommended pig intestines. Below, we bring you our list of the best ets not to miss around Mong Kok (including a few places bordering the adjacent neighbourhoods of Prince Edward and Yau Ma Tei). 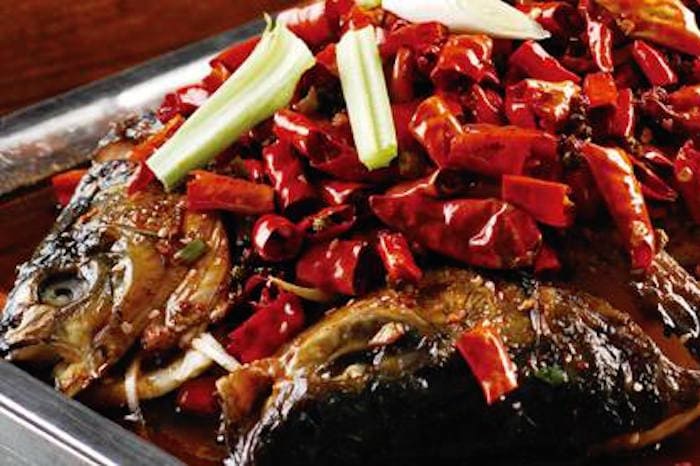 If you’re looking to clear your sinuses and work up a sweat, this authentic Sichuan place is the perfect venue for spice lovers. Fear not if you’re still trying to build up your spice tolerance as the heat level of the dishes is customisable. The menu has quite a good selection of dishes; we’re particularly partial to the fish with pickled vegetables (a harmonious balance of sour and spicy) and the Sichuan water fish (bring on the tissues). Don’t miss an order of the pan-fried buns with condensed milk to soak up some of that soup! 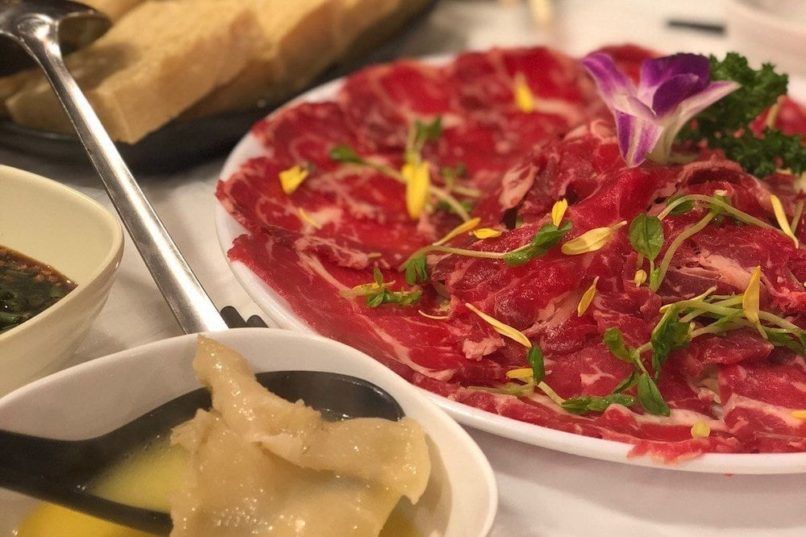 This hot pot restaurant boasts a retro décor that we love, and their best-selling soup base — chicken and fish maw soup — is pretty amazing, too. The broth is seriously good; you can tell that a lot of TLC has gone into making that type of hearty chicken soup for the soul. The soup base comes out first for you to drink the soup, and then to nibble on the chicken and fish maw before actually moving on to the dunking and dipping part. We recommend going with a group of four or more so you’re able to make use of their reservations system and so that you can try a greater variety of items on the menu. The name says it all — this upstairs restaurant is tucked away right in the middle of the Ladies Market. A relatively new restaurant, it’s already become a beloved place for local patrons to gather for a group dinner or a quick weekday lunch. We love their modern yet authentic take on traditional Hong Kong dishes, such as shrimp toast and stinky tofu. Plates are meant to be shared and served in the middle of the table, with dishes paired simply with steamed white rice. We recommend the chicken, squab and any of the dishes in the clay pots. 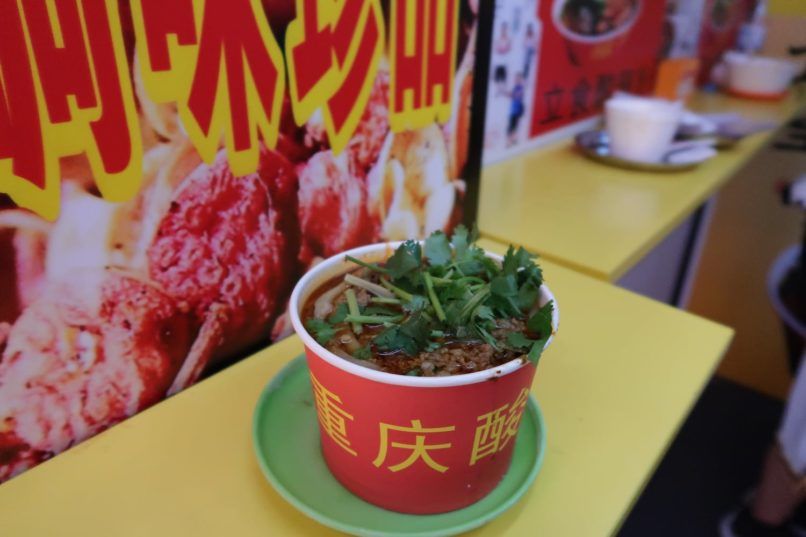 There’s no English signage for this hole-in-the-wall joint, but just follow the pungent aromas of peppercorn and spice. We’ve heard that this store gets their vinegar and chilli oil directly from Sichuan, which is probably why their food tastes so good. They serve up the best bowl of spicy and sour Sichuan noodles we’ve had in Hong Kong, and that’s saying a lot. The noodles are bouncy and chewy, and the spiciness is not at all bitter, but fragrant and aromatic. A normal bowl comes with mixed greens of cilantro, spring onions and Chinese celery with minced pork and peanuts, but you’re welcome to add anything else you fancy, including daikon radish, beef tripe and fishballs. Make sure to have some tissues on hand and perhaps a bubble tea or two to help mellow out the spice. 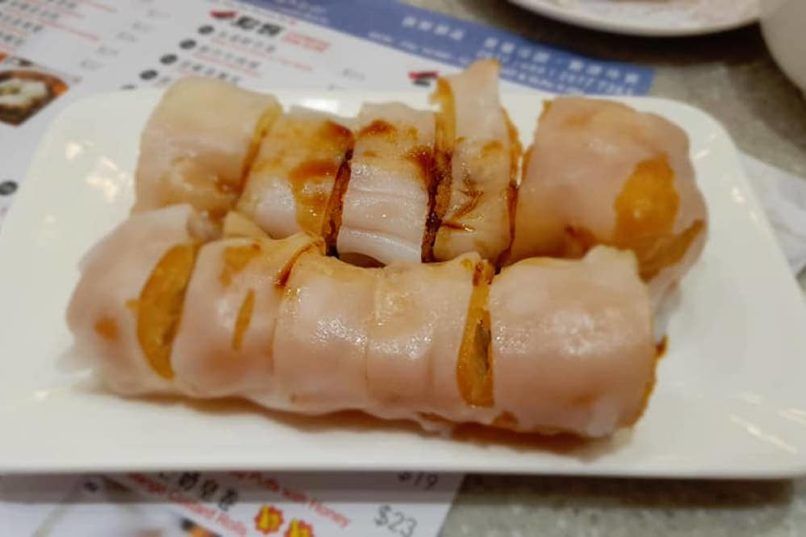 Awarded one Michelin star in 2012, this dim sum joint is a perennial favourite with both locals and tourists. The unfussy dim sum diner serves up steaming baskets at all hours of the day, and gives the more well-known Tim Ho Wan a run for its money when it comes to consistent quality and wallet-friendly prices. During peak service hours, queues can wrap around the block — but the wait is well worth it. We recommend getting the classics such as the shrimp dumplings (har gau), pork and shrimp dumplings (siu mai) and shrimp and vegetable dumplings. But really, you can’t go wrong — everything here is pretty tasty. If you want to skip the queues altogether, One Dim Sum is opens until midnight and makes for a great late-night snack. 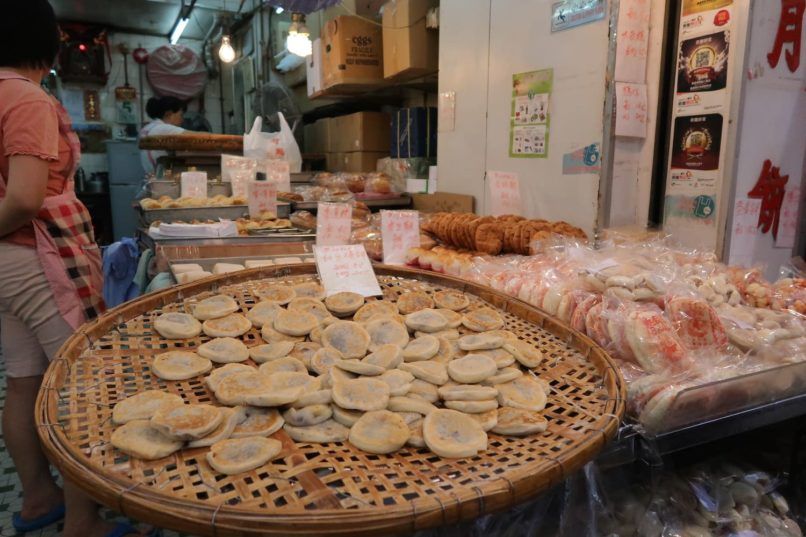 Opened in 1984, Kee Tsui is a decades-old bakery that’s now run by the second generation of the family: the owner’s son. Using the same original recipes, they’ve stuck to their roots; however, they’ve also expanded the business to selling their baked goods via online platforms — they’re even served on select Hong Kong Airlines flights. We recommend the signature red bean paste pancakes, walnut cookies and wife cakes. 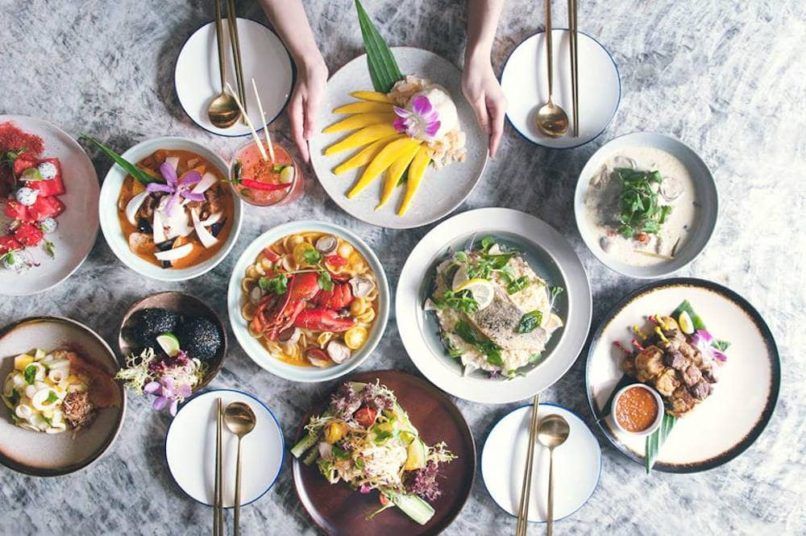 Opened by the Atum group, which was founded in 2014 with their eponymous dessert bar in Causeway Bay — Champak Restaurant follows the same philosophy present in all of the group’s establishments. After all, the name “Atum” was chosen to reflect creativity and completion, which ties in to the group’s philosophy of destructing dishes and rebuilding them in their own style. Champak is a modern Thai restaurant impeccably decorated to let guests feel like they are dining in the depths of lush Thai forests. Their signature dishes include crabmeat and pineapple fried rice, where the tropical fruit is grilled to enhance its sweetness; pad Thai with king prawns; and milk tea panna cotta, which is best washed down with the blue-hued butterfly pea lime tea. 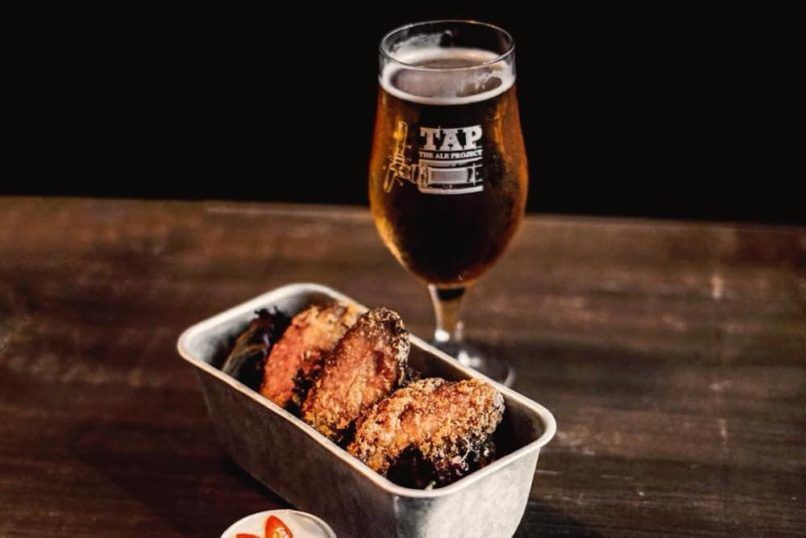 The first taproom focused on craft beer in Kowloon, TAP: The Ale Project remains a popular hangout during the evenings. We love that they champion local breweries, with at least half of their rotating taps serving local craft beers at any given time. The bar also dishes out a tantalising selection of East-meets-West bar snacks, from rendang nasi lemak wraps to grilled cheese paninis and fries with salted egg yolk. For a supremely satisfying combo, we’d recommend ordering the craft beer platter (3 samplers) paired with the toasted gai (fried chicken on toast, main image above). Come early or you may just find yourself in the queue. 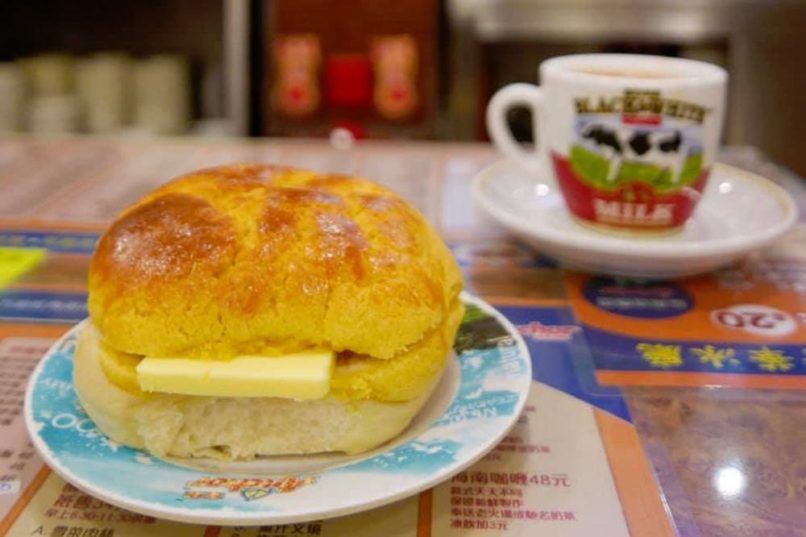 Almost 50 years ago, the owner initially opened this cha chaan teng because the open-air dai pai dongs were whittling down at that time and she wanted to be able to host her husband’s friends where they could have a place to properly sit and chat. To this day, all of the baked goods — apart from the actual mixing of the dough — are made in-house and hand-formed. The chefs start their day off at 2am, with baked goods coming fresh out of the oven throughout the entire day. Kam Wah is the place to go for Hong Kong’s most iconic snack: a pineapple bun with butter paired with a milk tea. The pineapple bun is warm and toasty, with a thick slab of ice cold butter placed in the middle which melts slowly as you bite into the warm folds of the bun. Trust me: It’s even more delicious than it sounds. 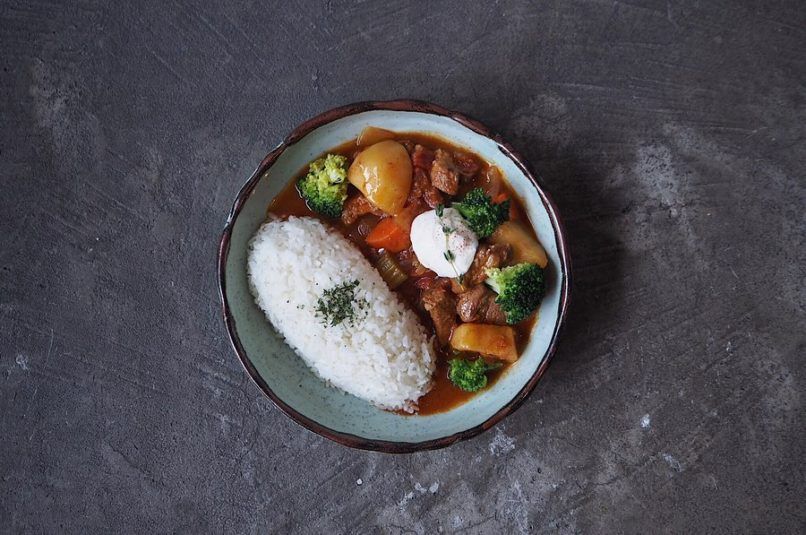 Tucked away down a quiet side road in Prince Edward, Feed Your Nerves is a hidden gem of a café opened by the owners of a flower shop. It’s an ideal retreat for anyone seeking an afternoon of peace and tranquility while sipping on a well-made latte or flat white. The open kitchen is located on the ground floor but there is additional seating upstairs with a small retail area selling handmade arts and crafts. The menu is constantly changing and features comforting options such as Japanese curry and salmon with dashi broth; the house-made baked cheesecakes and canelés are simply irresistible. 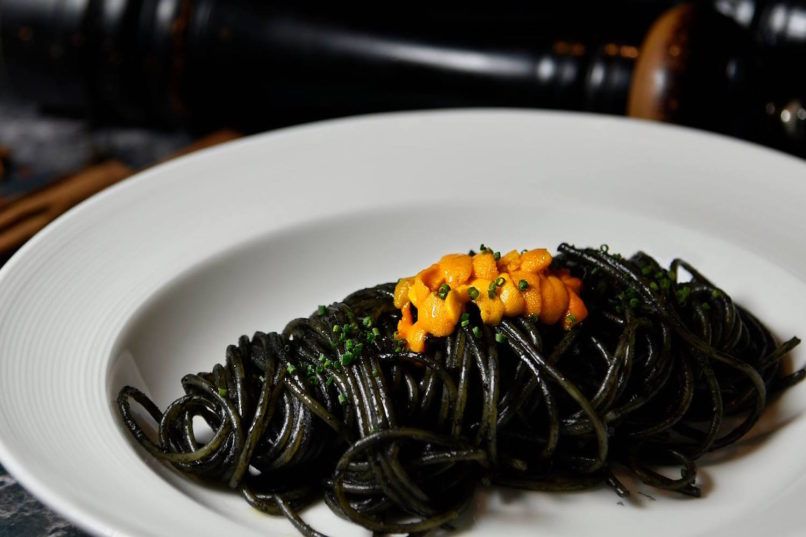 Who said there weren’t any good rooftop bars in Mong Kok? Perched on the top floor of Nathan 726, Sky726 boasts a panoramic view of Hong Kong’s concrete jungle, offering French food with a fusion twist. The eclectic menu ranges from classic dishes such as escargot and confit duck to cross-border creations such as miso-glazed black cod, peri peri chicken and squid ink pasta with uni (pictured above). Nothing beats coming here following an afternoon of shopping for an early evening drink and snacks to soak in the views away from the hustle and bustle.

Virginia Chan is the founder of Humid with a Chance of Fishballs Tours, which specialises in Hong Kong food tours. The excursions encourage visitors to get a glimpse into the life of a Hong Kong local for an authentic and insightful experience. Using food as the platform, tours delve deeper into Hong Kong’s culture, heritage and traditions. For more information, visit here.

Dining Restaurants neighbourhood guide mong kok where to eat in mong kok best restaurants mong kok
Virginia Chan
Travel
Sign up for our newsletters to have the latest stories delivered straight to your inbox every week.