The trendiest bars in London to check out

So much can be said about London’s bar culture. Last year, the city alone made three out of the top five in the World’s 50 Best Bars list, with the innovative Dandelyan coming out tops for not only its swish interiors but also delicious cocktails and emotionally-intelligent service. It is, however, not the only bar in the city to boast this holy trinity; quite the contrary, London’s drinking scene is chockfull of some of the best and trendiest bars you’ll ever find in the world.

Along with a burgeoning dining scene, it’s little wonder then that the city now beckons more than the average pub-goer, instead attracting alcohol enthusiasts globally who know a thing or two about a damn good cocktail. If you’re planning a trip to the cosmopolitan city this summer, here are the trendiest bars in London to include in your itinerary. 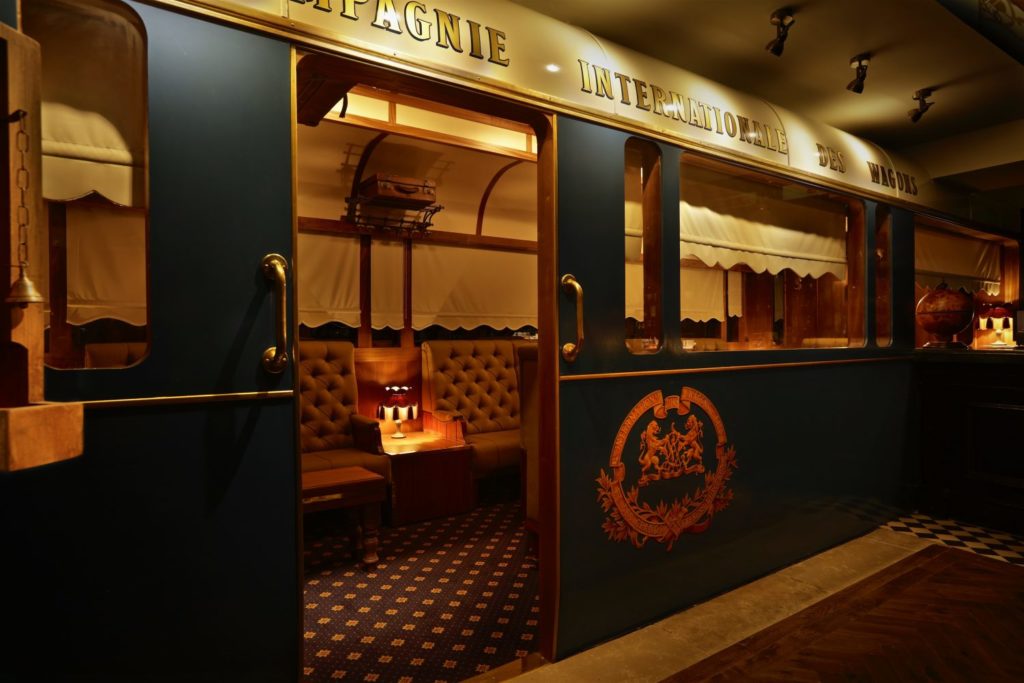 Located on the Strands is an eccentric escape into the 19th century named after one of the most storied protagonists in literature. Mr Fogg’s Society of Exploration — as it’s so aptly named — takes inspiration from Phileas Fogg’s 80-day adventure, and it does just that by whisking patrons off on a sensory trail around the world.

A large globe at the entrance sets the tone by marking the spots the globe-trotting explorer set foot on with his sidekick Jean Passepartout, and sets the path to themed rooms within. The Map Room, for example, is filled with antiques and modern cartography, and has its own ‘resident explorer’ who conducts cocktail classes and talks. The most compelling however, is the life-size replica of the Victorian Orient Express carriage, a bar of which sees era-appropriate brass lamps and banquette seating that would take you back in time.

Food and cocktails are just as exotic; amidst the cabinets of curiosities and shelves of travel books, enjoy toasted crumpets with deep fried grasshoppers and landmarked themed drinks such as ‘Machu Picchu’ and ‘North Pole’. 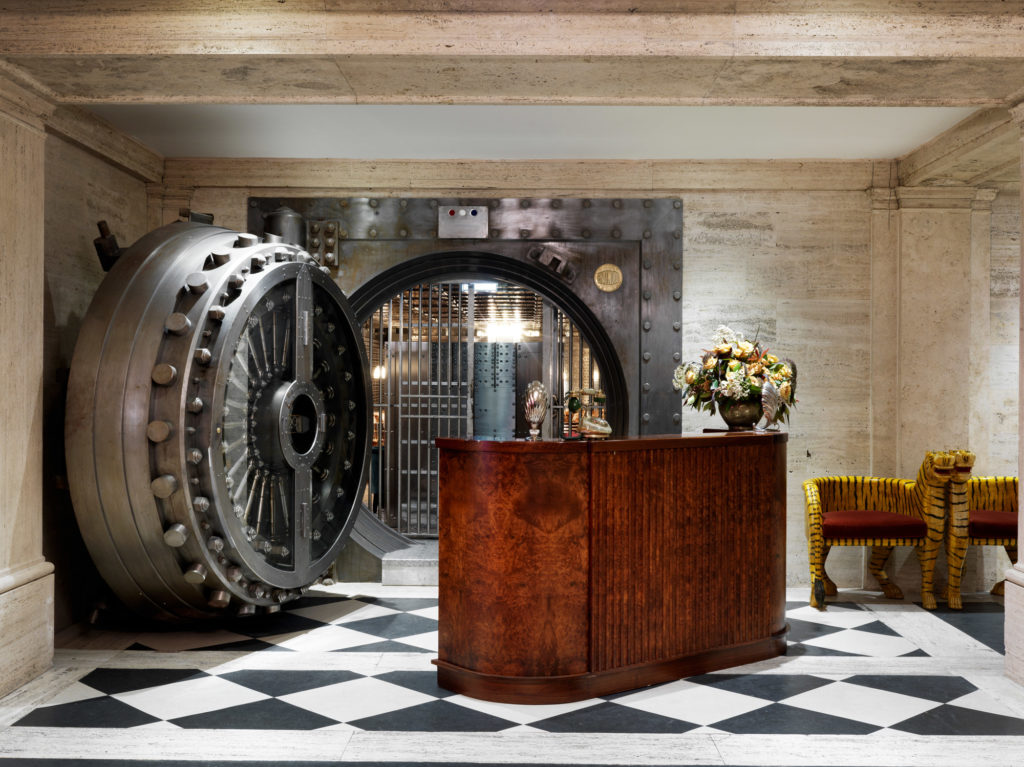 If walking through a regular door is too mainstream for you, The Ned will indulge you with an actual vaulted door. One of a few remnants of the building’s days as a clearing house bank, the 20-tonne door now leads to a 1920s-style cocktail bar, original safety deposit boxes and all.

The original Midland Bank strongroom might be reserved for members only, but you’ll get access to the drinking den throughout your stay at the hotel. It’s become the spot to be at for a nightcap (seeing as the bar only closes when you leave), with a cheeky heist-inspired cocktail menu that’s complemented by a stellar late-night Italian menu, courtesy of the well-known Cecconi’s just upstairs. 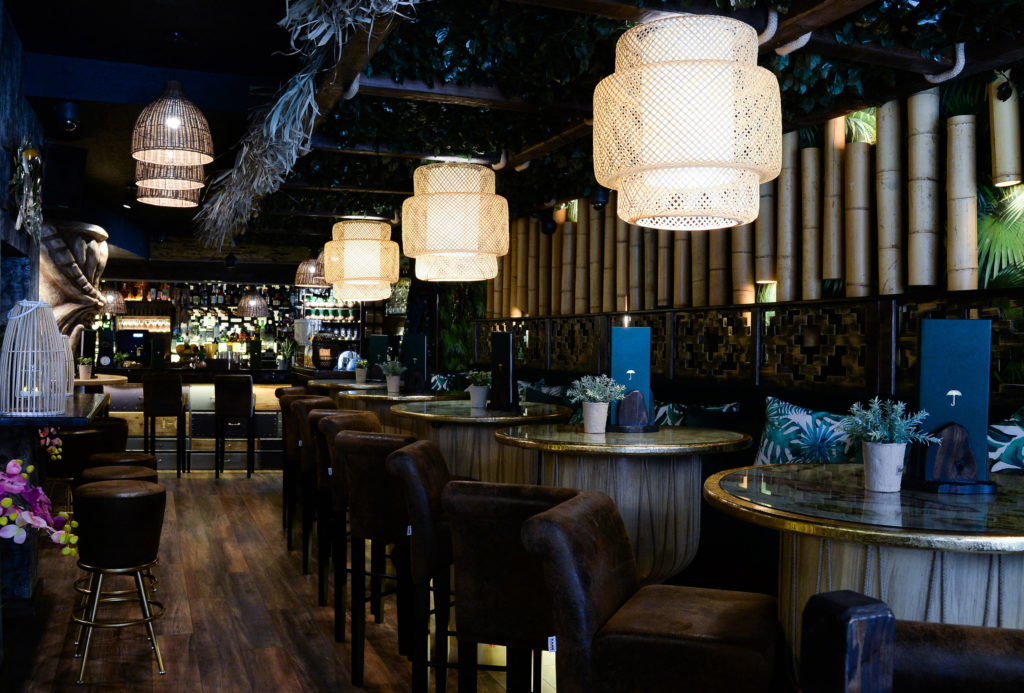 It’s not all gloom and drizzle in London; Laki Kane is perhaps the closest you can get to Hawaii. Polynesian for ‘lucky person”, the relatively new addition the buzzing Upper Street isn’t just another attempt at the tiki bar. Here, mixologists proffer authenticity, scouring the globe for artisanal rums, sugar cane syrups and fresh fruit for their concoctions.

Suitably, the bar sports palm print wallpaper, a generous smattering of bamboo and lush tropical flowers for a vibe unlike the rest of London’s. Its huge sharing cocktails are a must-try if you’re with company, or do as most rum lovers do and bottle your own unique rum in the in-house rum club upstairs. 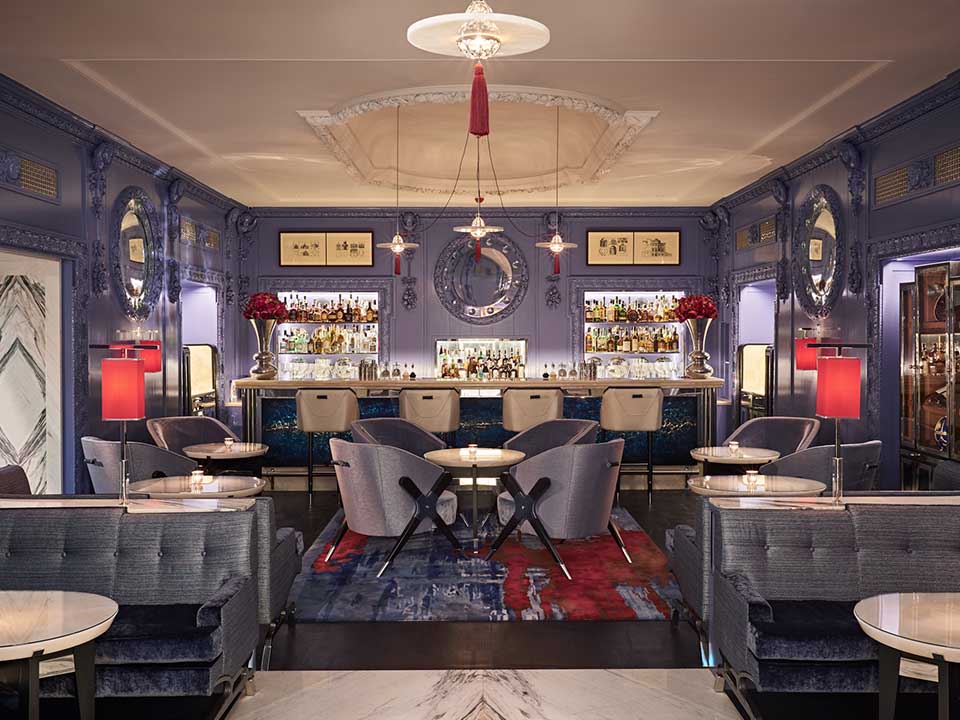 When the famous Blue Bar at The Berkeley reopened last July, the bespoke midcentury inspired furniture wasn’t the only upgrade. The new space — smothered in a striking Lutyens Blue in which it’s named after — sees plush furnishings and a new menu which runs with a colour-coded theme. It won’t be long before you learn that potent highballs come in foreboding shades of red, the yellow ones are laden with bubbly, and the blue cocktails are signatures of the bar’s.

The chic space has become a staple for those seeking after-work drinks, but those looking for an experience can put their names down for ‘Out of the Blue, a multi-sensory experience in a secret space within the hotel that pairs curated cocktails with culinary science and 360-degree projection technology. 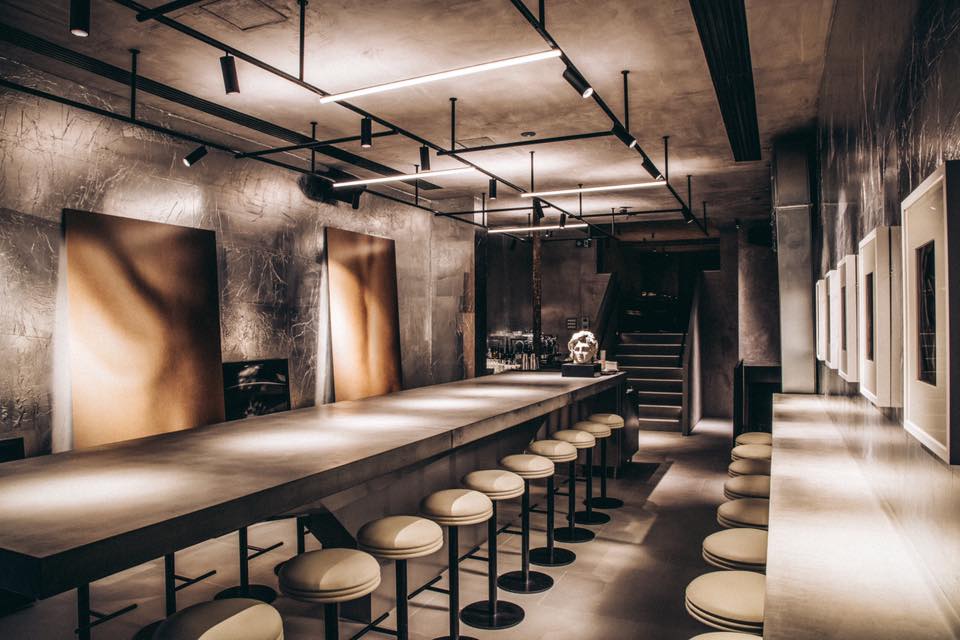 The third post from drinks extraordinaire Tony Conigliaro — whom has been repeatedly referenced to as the ‘Heston Blumenthal of cocktails’ — is a sheer exercise of the ‘less is more’ concept. Here, the cocktails get his signature cutting-edge treatment, yet are only referred to by stark enigmatic words like “Waif”, “Snow”, and “Ghost” — perhaps to complement the equally minimalist interiors, of which are inspired by Andy Warhol’s Silver Factory.

It’s hard to take a bad photo in the gallery-like space; a hefty polished concrete counter runs down the middle for a communal experience and vaporous photographs sit against silver foil-lined walls. The cocktails are decidedly more complex, and some of the most intriguing includes “Dirty”, a citrus-piqued, gin-based drink served in a shallow 3D-printed glass, and “Violin”, which immediately brings to mind the dark oak of workshops and libraries of yore. 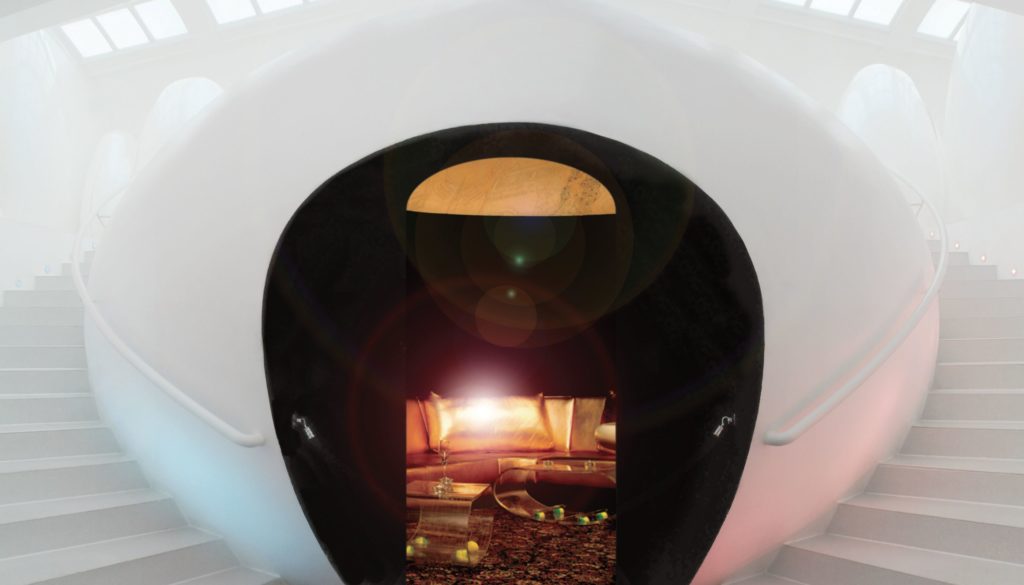 Sketch is perhaps most well-known for The Gallery — yes, that candyfloss-hued restaurant — but there are other spots in which you can be transported into another world at. The East Bar is perhaps its best kept secret, a futuristic pod-like bar and lounge designed by Mourad Mazouz and acclaimed architect Noé Douchaufour.

Situated under the equally over-Instagrammed pod bathrooms, the ultra-modern bar is an intimate space that’s perfect for pre- or post-dinner cocktails. The artist-doodled wall isn’t the only hint that it’s a creative space, the circular bar in the middle is lined with hundreds of Faber-Castell colour pencils, creating a kaleidoscope which reflects the mixologist’s diverse drinks palette within the modern enclave. 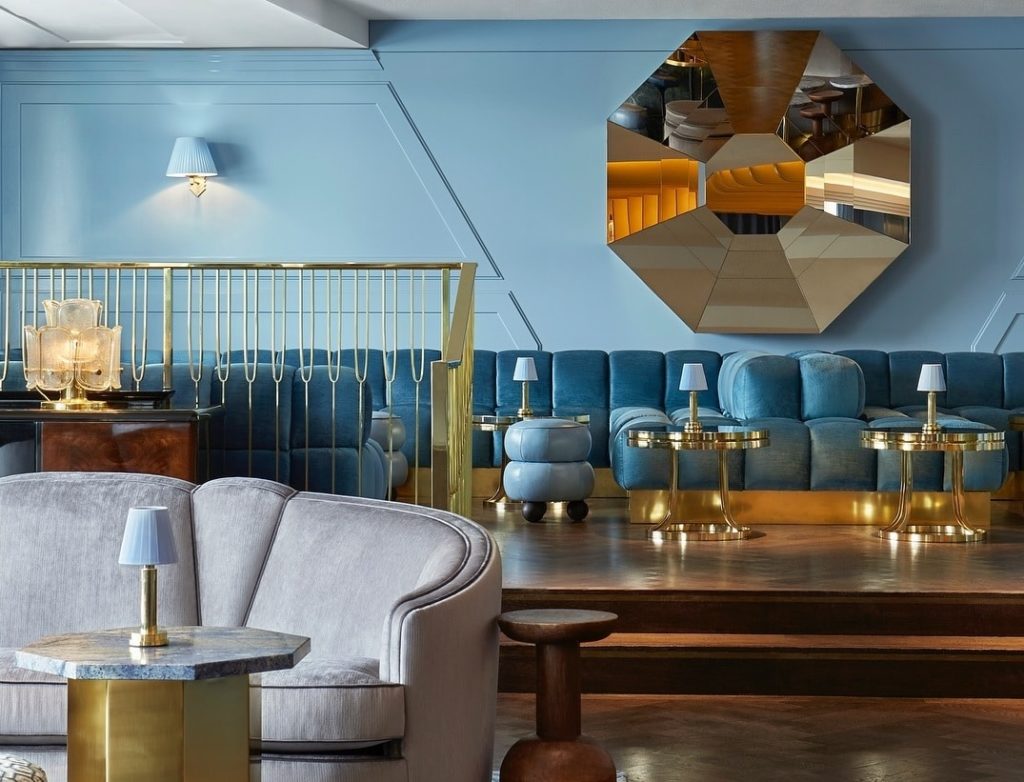 Just a few months after Ryan Chetiyawardana’s Dandelyan was announced the best bar in the world, the renowned London mixologist announced that he was closing the establishment. In its ashes emerged Lyaness, a new project that will surely put him on the same list again soon.

Located within the same spot at the sleek Sea Containers Hotel by the River Thames, Lyaness sees a striking new colour scheme that swaps out the green, gold, and millennial pink-tinged interiors with a cooler mix of blue and grey. Fans of Dandelyan will however, be pleased to find the same green slab of marble that forms the bar.

The menu is also shaken up, and instead of following a theme, ‘Mr. Lyan’ has chosen to build the drinks around seven key ingredients. The bizarre list includes Purple Pineappple, Aromatised Milk Wine, and Infinite Banana. You’ll no doubt have plenty of questions, so hit up one of Lyaness’ very knowledgeable bartenders for a drink that’ll suit your taste. 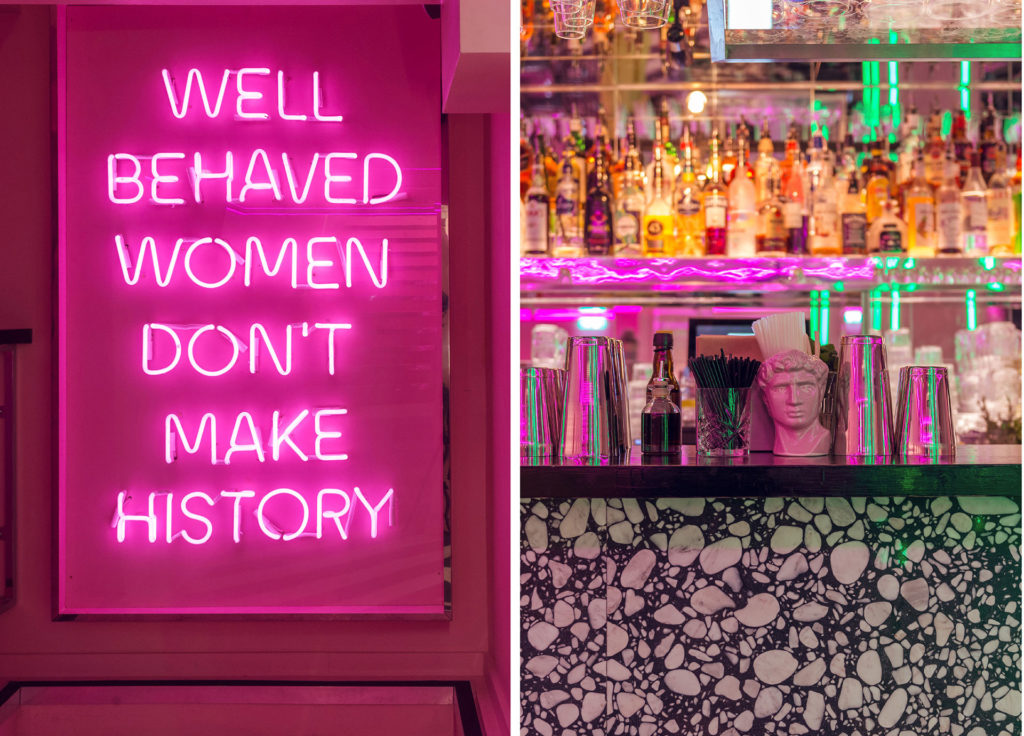 Tonight Josephine takes its motto “well behaved women don’t make history” vey seriously, most evidently by its flamboyantly fuchsia interiors. The hedonistic temple is now perhaps Waterloo’s sassiest spot, and offers equally loud cocktails; the most popular remains to be a gin and Prosecco concoction named the Love Potion No.10.

Conceptualised as a tribute to Josephine de Beauharnais, the famed nineteenth-century party animal and wife of Napoleon, the bar’s interiors are bedecked in neon and glitter and come with an invitation to do exactly as you please. This of course ranges the whole spectrum from debauched to classy. This theme continues to the bathroom, where police mugshots of your favourite celebrities line the doors, Justin Bieber included.

Travel Drinks London United Kingdom best bars
Shatricia Nair
Managing Editor
Shatricia Nair is a motoring, watches, and wellness writer who is perpetually knee-deep in the world of V8s, tourbillons, and the latest fitness trends. She is fuelled by peanut butter and three cups of coffee a day.
Motoring Wellness Watches Beauty Style