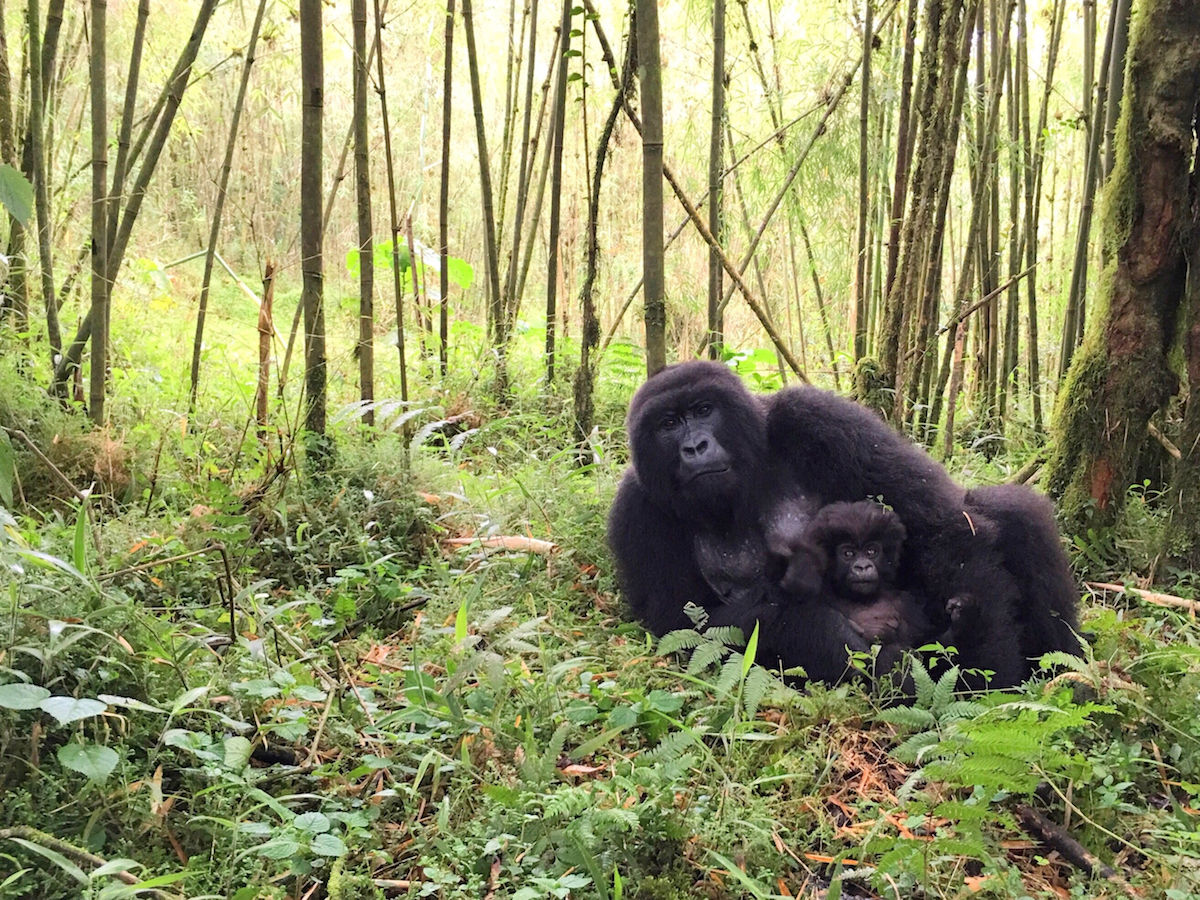 Trekking through Rwanda, home to the last mountain gorillas

Travel
Trekking through Rwanda, home to the last mountain gorillas
Share this article
Next article

Rwanda is infamous for its devastating genocide that terrorised the country for over 100 days in 1994, after a plane carrying then-President Juvenal Hayarimana and his counterpart Cyprien Ntaryamira of Burundi was shot down, killing everyone on board. This troubled past has been chronicled in various movies like Hotel Rwanda (2004) and Grey Matter (2011).

However, the country has built itself up the past decade and is now remarkably peaceful. It has also put itself on the world map as Africa’s most sought-after wildlife destinations.

The small landlocked country is known as the land of a thousand hills, and rightly so, with endless mountains, volcanoes and valleys at every turn. Yet, nowhere are the mountains more majestic than the Virunga volcanoes in the northwest, and hidden among the bamboo forests are the superstars of Rwanda: some of the world’s last remaining mountain gorillas.

Since the 1988 film Gorillas in the Mist, the story of a scientist who came to Africa to study the vanishing mountain gorillas and fought to protect them, Rwanda has been known for more than its tragic past. A large percentage of tourism to Rwanda these days is made up of travellers looking to trek with the gorillas.

There’s no better place in Rwanda to trek hand-in-hand with these beautiful creatures than Volcano National Park, the country’s most popular national park. It’s the best destination in the world to see endangered mountain gorillas in the wild. Volcano National Park is also home to active volcanoes, caves and grasslands set against stunning views. Besides gorillas, other animals you can spot in their natural habitat include the buffalo, hyena, golden monkeys, and some 200 bird species.

Rwanda is home to two other national parks with protected ecosystems and wildlife reserves located within the borders of the country. These other protected natural zones include the Akagera National Park and Nyungwe Forest. The primeaval forests of the latter, for instance, are inhabited by more than 75 different mammals, including hundreds of chimpanzees and different bird species.

In the northeast, you’ll find Akagera National Park, which straddles Rwanda’s eastern border with Tanzania. It dates back to 1934 and offers a quintessential savannah safari experience far from the usual khaki-clad crowds in Kenya.

The landscapes here are mostly savannah plains spanning low-lying grasslands in the north of Akagera, much like other areas in East Africa where wildlife thrive. To the west, you’ll find valleys and hills typical of the Rwandese countryside and to the east, the Akagera river meanders into a series of lakes, marshland and papyrus swamps that make up vast areas of the central African wetlands.

Yet, Rwanda is not all rugged wilderness. When not trekking with gorillas, hiking to volcanoes, or mountain biking in the jungles, wander the streets of the capital city instead, and learn more about Rwanda’s history and culinary scene. Alternatively, the shores of Lake Kivu also conceal some of the best inland beaches on the continent.

Most tourists gloss over the city en route to the country’s natural treasures. However, the city deserves at least a day or two of your itinerary. Kigali, the heartbeat of Rwanda, is arguably East Africa’s safest and most future-focused city. This is where you can find a patchwork of palm tree-lined boulevard, artisan coffee shops, international restaurants, and a downtown dotted with new buildings.

There’s also no better place to learn first-hand about the Rwandan genocide. When in Kigali, take a few hours to stop by the Kigali Genocide Memorial Centre, which is the final resting place for more than 250,000 victims of the genocide against the Tutsi. The memorial is located in Gisozi, a ten-minute drive from the centre of town.

After which, take a walk to Hotel des Mille Collines, the actual setting for Hotel Rwanda from the critically acclaimed movie. During the genocide of 1994, the hotel was a refuge and safe house, with nearly 1,300 people taking refuge here. It has since been refurbished and was managed by Kempinski Hotels for two years. Prices for rooms start at S$219.

Understandably, a concern for most visitors to Rwanda is safety. It may be hard to believe if all you’ve heard are stories set in Rwanda’s past, but the country has stabilised and now, a sense of order prevails. Violent crime is nearly non-existent and police can be spotted at most major intersections in the city.

In fact, Rwanda is now the safest country in Africa, and the 9th safest in the world, according to the World Economic Forum (WEF).

Rwanda, like much of East and Central Africa, is mostly a cash-based society — so remember to bring lots of cash with you while in the country. The local currency is the Rwandan Franc, but the US Dollar is also accepted in many cases, such as with hotels, safari companies and airlines.

The best time to visit the gorillas is in the main dry season, between June and September, with a shorter, unpredictable one from December to early March. Alternatively, October and November are the months when fruits ripen, making it the best time to observe chimpanzees in the wild.

Take an international flight, such as Etihad Airways, to Nairobi from Abu Dhabi, before transferring onto Kenya Airways to Kigali International Airport. The airport is then just located just 13km from the capital city.

Travel Travel Guide Africa Rwanda akagera national park nyungwe forest
Dewi Nurjuwita
Senior Writer
Dewi Nurjuwita is a travel and design writer who can be found exploring the streets of foreign cities with passport in one hand and a cup of coffee in the other.
Travel Architecture Interior Design
Sign up for our newsletters to have the latest stories delivered straight to your inbox every week.