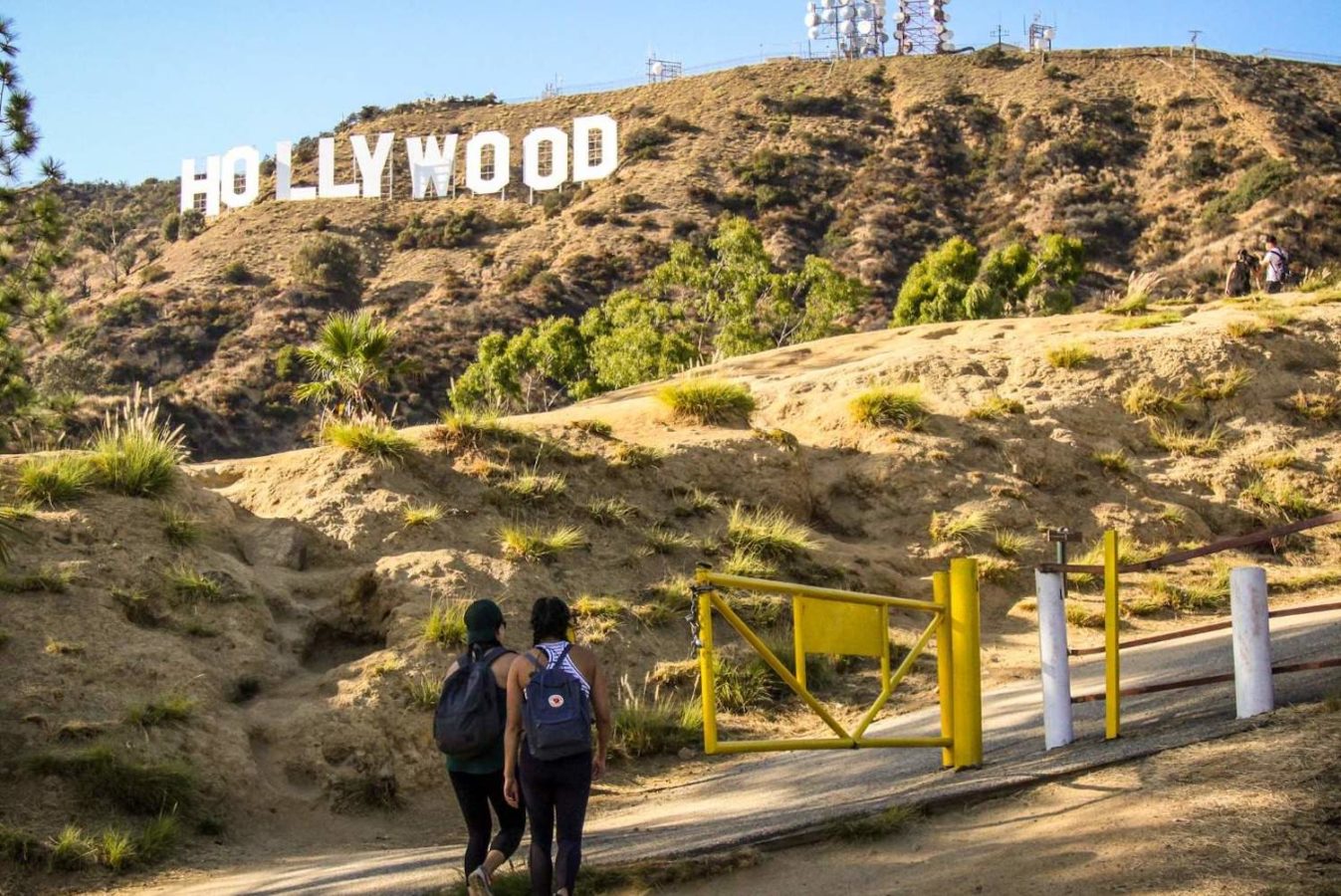 It’s the city of Tinseltown, palm-fringed beachfront boardwalks; the home of In-N-Out and the birthplace of the silver screen as we know it today. While people love to grumble about the traffic, the pollution or the artifice of so-called Hollywood culture, there’s no denying that Los Angeles is one of the most important, inimitable and entertainment-worthy destinations in the United States. Before you visit ‘La La Land’ for the first time, you’ll want to check out our guide below for some of the must-hit attractions. It goes without saying that seeing the Hollywood Sign is a bucket-list item on every first-time visitor’s list to Los Angeles. The iconic sign is pretty hard to miss but for the best view head to Griffith Park, where you can choose from a number of hikes from the Brush Canyon Trail to the Burbank Peak Trail for an up-close view of the sign on one side, and a birds-eye view of the city on the other.

Dive into art, nature and books at Huntington Library History and art buffs won’t want to miss a trip to the Huntington in San Marino. In addition to the library’s vast book reserves, the Huntington houses an extensive art collection focused on 18th and 19th century European and American art. Outside, the library is surrounded in 120 acres of lush botanical gardens, encompassing a desert garden, Japanese and Chinese gardens, and subtropical gardens — a true botanist’s paradise.

Get your tan on at Venice Beach The world-famous Venice Beach is one of the city’s best spots for people-watching, filled with a diverse cast of characters from tattooed skateboarders to golden-tanned gym buffs, street performers and more. The cosmopolitan seaside neighbourhood is littered with activities, from walking the 2.5-mile-long boardwalk, to indulging in an array of international cuisine at myriad food vendors, biking along the beach and viewing the historic 20-century arcaded buildings that hark back to the early development of the area.

Wine, dine and feed a giraffe with Malibu Wine Safaris While Los Angeles is most often thought of as a sprawling urban metropolis, venture further out west of the city to Malibu and you’ll encounter stunning scenery from grand canyons to rolling hills and ocean views. It’s no wonder that many Los Angelenos choose to have their wedding celebrations here at the many breathtaking venues and vineyards.

For an unmissable activity combining scenic views, wine tasting and even exotic animal spotting, make like the local celebs and influencers and join an outing of the Malibu Wine Safaris, one of the most popular tours in the area. With a party of fellow wine lovers dressed to the nines (this is Malibu, after all), you’ll get a chance to explore the 1,000 acre Saddlerock Ranch and vineyards from the company’s custom-built open-top Safari jeeps. Along the way, taste spectacular local wines, make the acquaintance of the friendly farm animals — think zebras, alpacas and local farm hero Stanley the Giraffe — and savour the soaring views from high up in the Malibu hills.

Scout stars past and present at the Walk of Fame While we surely wouldn’t recommend spending all your time in Hollywood, you can’t pay a visit to LA without seeing the Walk of Fame. On the city’s most famous boulevard, the handprints and footprints of actors and celebrities (currently 2,500 and counting) can be seen cast into cement in and around the famous Chinese Theatre (instantly recognisable for its pagoda-shaped facade). Other sights to visit nearby include the Dolby Theatre and Madame Tussauds Hollywood. Get a behind-the-scenes look at your favourite TV shows and movies with a half-day tour of the Warner Bros. Studio lots. This popular excursion includes a drive around the 110-acre backlot where countless movies were brought to life, with knowledgeable guides dishing the inside dirt on movie-making, celebrity quirks and other fun facts. Wander onto the iconic sets of La La Land, Friends, Big Bang Theory, Batman, Gilmore Girls and more.

Movie buffs will love the chance to visit the various Soundstages where Hollywood history was made, duck into the Bat Cave to visit the Batmobiles, and take a gander around the Prop Department housing more than 450,000 cinematic props. At the DC Universe: The Exhibit, superhero fans can also view the props and costumes from movies such as Wonder Woman, Aquaman and more. With filming happening weekly, with any luck you may also spot a celebrity in the flesh.

Gorge on pastries at Republique A quintessential West Coast eatery, Republique stands as a bastion of LA’s brunch scene, a one-stop shop for some of the best pastries, breads and breakfast bowls in the city. The dining room itself is stunning, with vaulted ceilings and tall framed windows combined with a chic warehouse vibe to lend a sense of space and sophistication. Go here early before the queues hit and fill up your tray with rustic pastries — think crostatas, tarts, Danishes, doughnuts and more — alongside a savoury selection of fresh farm-style omelettes, hearty soups and pastas, and signature dishes such as the perennially popular kimchi short rib rice bowl.

Join the hipsters queuing at Sqirl Despite its hipster vibes, one of LA’s most hyped-about restaurants isn’t just about catering to the prevailing millenial-driven, Insta-friendly food zeitgeist. Jessica Koslow’s Sqirl has claimed its rightful place amongst LA’s food hall of fame for the kitchen’s dedication to championing local ingredients and its chef-founder’s innate ability to elevate farm-fresh ingredients beyond simple avo-eggs-and-toast brunch fare. The obscure neighbourhood is part of the restaurant’s charm: on any given morning, you’ll find a long queue of discerning foodies snaking around the corner, waiting to get their hands on dishes such as rice with ricotta and fermented hot sauce, thick burnt brioche slathered with housemade jam, and hearty baguette sandwiches. Choose anything on the menu: you won’t be disappointed.

Tuck into a modern Korean menu at Majordomo Those seeking more elegant hedonistic pursuits will want to make a booking at Avec Nous, an upscale Italian-French restaurant nestled inside the Viceroy L’Ermitage in Beverly Hills. Replacing Livello, the fine dining restaurant is spearheaded by chef Olivier Quignon, who transports diners to the Riviera with classical French recipes imbued with a modern, creative touch. Served inside a stylish restaurant with plush banquettes and tableside service from steaks to champagne carts, the Gallic-inspired menu is packed with treasures from a sumptuous rack of lamb to chicken coq au vin and a hearty, rib-sticking beef cheek ragu. A well-stocked bar shakes up classic cocktails from espresso martinis to old fashioneds. A mere US$35 (approx. HK$272) is a small price to pay for the mouthwatering buffet spread at Veranda, Hotel Figueroa’s dreamy, south-of-the-border inspired alfresco restaurant. The buzzy eatery is adjacent to the pool and framed by swaying palms, providing a fitting backdrop to a Mexico City-inspired menu from chef Adrian Garcia. In this urban oasis, giddy brunchers gather for hours on end of paloma-fuelled fun, with a spread of DIY tacos on house-made tortillas, enchiladas, fresh salads, salsas and breakfast burritos serving as a testament to Los Angeles’ hard-earned reputation for excellent Mexican food. Afterwards, don’t miss a tour of the Moroccan-inspired property with its eclectic artwork, cosy nooks and crannies to explore.

If you’re looking to rub shoulders with the well-heeled in Beverly Hills, the city’s most upscale neighbourhood, you can’t go wrong with a room at the Sofitel Los Angeles. The brand’s flagship LA property brings together the sophistication of old-school Hollywood glamour, the chic aesthetic of French-inspired architecture, and quintessential sunny West Coast vibes, all wrapped in a luxe modern accommodation.

A total of 295 guest rooms are fitted out with plush bed linens, high-definition TV and WiFi, glass-enclosed rainfall showers, and Lanvin bath amenities. Make time during your stay to check out the bevy of top-notch facilities include a luxury spa, state-of-the-art gym, garden patio dining at Cattle & Claw, and bespoke cocktails at Riviera 31 Lounge. On warm days, there’s no better place to soak in the rays than at the upper pool deck, surrounded by colourful beach loungers, deck chairs, a fire pit and pool. The hotel is conveniently located near landmarks such as the Beverly Center, Melrose Avenue, Rodeo Drive and Sunset Boulevard.

Los Angeles
Leslie Yeh
Editor in Chief
Having worked as a lifestyle editor for almost 10 years, Leslie is thrilled to be writing about the topic she loves most: wining and dining. When she's not out pounding the pavement for the latest new restaurant opening or tracking food trends, Leslie can be found at home whipping up a plate of rigatoni vodka and binge-watching Netflix with a glass of Sauvignon Blanc in hand.
Dining Restaurants Food Trends Drinks Travel