Home > Travel > Destinations > All the best places to eat in London, according to Zen’s chef Tristin Farmer

All the best places to eat in London, according to Zen’s chef Tristin Farmer

Travel
All the best places to eat in London, according to Zen’s chef Tristin Farmer
Share this article
Next article

London needs no introduction. It’s one of the centres of the world, and the city’s cosmopolitan mix of people and cultures have made its restaurants a global culinary destination.

The English capital, however, is massive, which is why we turned to chef Tristin Farmer for recommendations on where to eat. The Scottish native spent over ten years there cooking at restaurants by Gordon Ramsay and Jason Atherton before arriving here in 2018 to helm the three Michelin-starred Zen.

From fine dining temples to British pub food, with detours to a cutting edge restaurant in Nottingham and a forward-thinking eatery in Scotland, here are Farmer’s tips on where to eat in London.

“I’m original from the central east coast of Scotland, north of Edinburgh from a town called Kinross. It’s not a big town but there used to be a really big music festival called T in the Park. It was the only thing that happened there. I had two jobs in Scotland, then I moved to London when I was 21.”

“I lived in London for ten years, and the city is as much home as Scotland is for me. It’s one of the top dining cities across the world. I’m on the VTL flight back to London – I haven’t been home in almost two years – and I have four restaurants lined up.”

“I’m going to Davies and Brook, which is Daniel Humm’s restaurant in Claridge’s. I’m excited to see the space because I used to work for Gordon Ramsay in Claridge’s about 12 years ago. I’m also going to Core by Clare Smyth. It’s a three Michelin-starred restaurant and I used to work with Clare back in my Gordon Ramsay days. I’m excited to see what she’s doing.”

“Then I’m going to Pollen Street Social, which is Jason Atherton’s restaurant. I used to work for Jason, and Pollen is excellent. I’m also going up to Nottingham as well, which is two hours away by train from London, to Restaurant Sat Bains. I have never been there, but it has two stars and very progressive tasting menus. It’s in the countryside and they have rooms you can stay in.”

“For someone new to London, they should go check out a British pub. I used to live in Notting Hill, and we would go to the local pub called The Prince Bonaparte. It’s a modern gastropub that serves British roast and Yorkshire pudding, which is very traditional but still eaten every Sunday in the UK. ”

“London also has a lot of really cool restaurants. There’s a burger bar called Meat Liquor, which started in a carpark with picnic tables. There’s a restaurant called Flat Iron, it only does one cut of steak. There’s an amazing tapas restaurant called Barrafina. If you want modern European fine dining, go to Restaurant Gordon Ramsay, which has been three stars for about 20 years.”

“You would definitely want to go to Soho. It’s the hippie part of London, and there are some quirky cocktail bars there. Go to The Ritz for afternoon tea. They have a dress code – men have to wear a suit jacket – and it’s extremely British. You can go to the theatre district for the Savoy Grill for a very traditional beef Wellington and peche melba, which was invented there for an opera singer, then go for a West End show.”

“Scotland is more about the beautiful countryside. There are so many historic places, quaint little villages and restaurants, but it’s a very different dining scene. Cooking at home is more a thing. Rather than eat out as a family, you cook as a family.”

“I’m going to be cooking barbecue when I’m up there, but I’m also going to see my chef friend who’s got an amazing, beautiful restaurant called The Cellar in the fishing town of Anstruther. It’s modern British fine dining that uses the best Scottish produce. He forages on the beach, and gets the fish from the local harbour, which is like a 30-second walk from the restaurant.”

“The produce in Scotland is some of the best in the world. In the countryside, a lot of people grow their own vegetables. There were always eggs from the neighbour, milk from the farm, vegetables from Grandma’s house. We also eat a lot of seasonal foods. You would get asparagus and strawberries in summer, in the winter time you get shellfish, lobster, razor clams, and game. It’s something you learn to appreciate.” 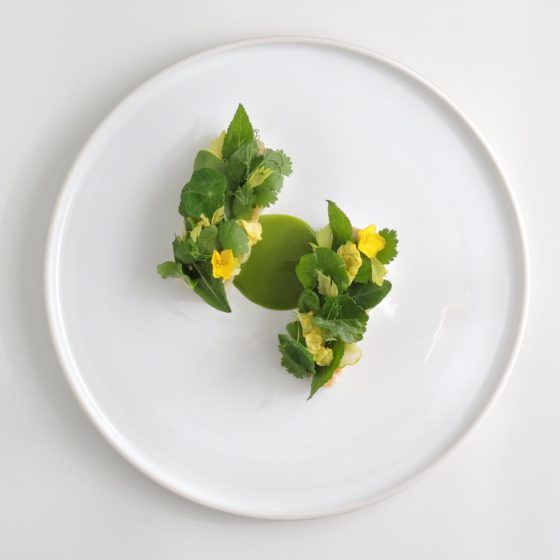 The cuisine reflects Humm’s upbringing in Europe (including a stint at Claridge’s as a 15-year-old junior cook), his time in New York City and the incredible bounty of ingredients from throughout the United Kingdom.

This combination results in elegant dishes like artic char with smoked onion, apple and sorrel, and variations of aubergine with coriander and roasted garlic. Mains include a stunning purple broccoli with buckwheat ragout, black garlic and lemon. 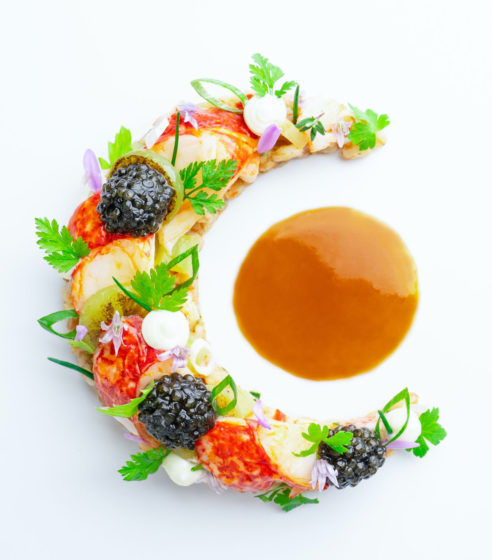 Core is the debut restaurant of Clare Smyth, the first and only female chef to run a three Michelin-starred restaurant in the UK. Her eatery celebrates the finest British ingredients with an emphasis on sustainable foods.

Core only offers an beautifully plated six course menu (£175 or S$317) that includes Isle of Harris scallop tartare with sea vegetable consomme, and potato and trout roe with dulse beurre blanc. Braised lamb is glazed with sheep’s milk yoghurt, while Rhug Estate venison is presented as haggis with pearl barley and Lagavulin whisky. 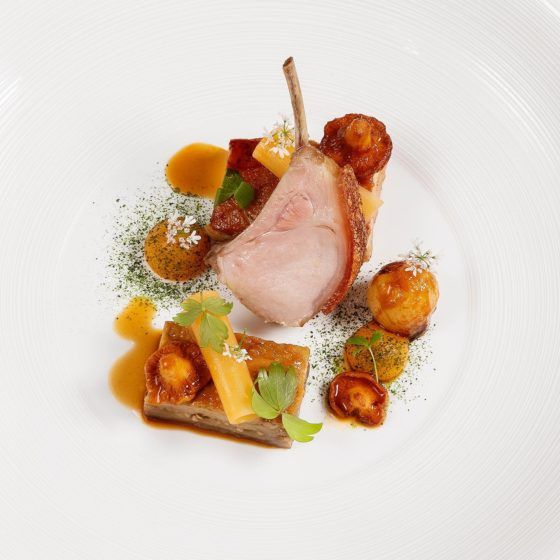 Jason Atherton opened Pollen Street Social in April 2011, and was awarded a Michelin star within six months, The casual yet elegant restaurant works with suppliers from across Britain to get the best produce from Colchester crab to Buccleuch beef. 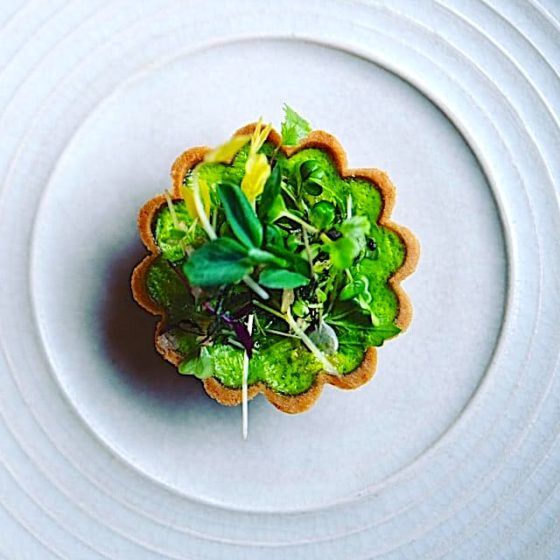 Restaurant Sat Bains is a two Michelin star restaurant in Nottingham. They source much of their produce locally as well as from their urban garden, which are transformed into seasonal tasting menus.

You can opt for your meal in four locations, the restaurant, chef’s table, the kitchen bench in the heart of the action, or the Nucleus, an experimental restaurant within their development kitchen that allows you to taste conceptual dishes before they make it to the main menu. If you feel a food coma coming on after dinner, the restaurant also has eight rooms to stay in.

The Prince Bonaparte is a modern British gastropub that uses fresh, high-quality seasonal ingredients. Much of the meats are grilled, charred, or smoked in the open kitchen, and they also have plenty of vegetarian and seafood options. For drinks, do like the locals do and order a pint of ale or cider. 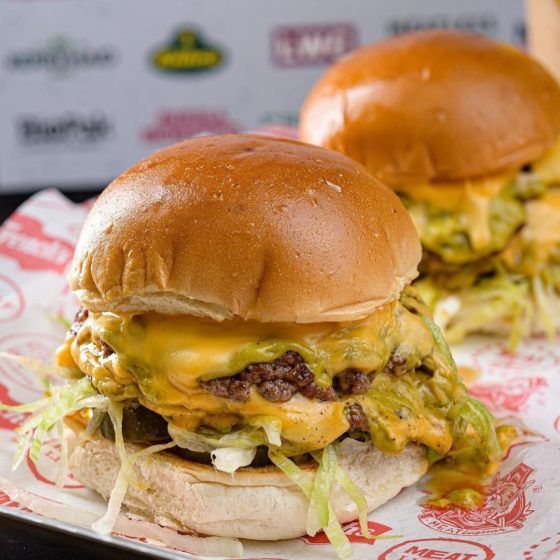 Meat Liquor started out as a food truck in a London carpark in 2009 before spilling into permanent locations around England. The brand has an edgy coolness, and is known for their American style burgers like the Dead Hippie: mustard fried double patties, American cheese, lettuce, pickles, white onions, and their secret sauce. Also on the menu are chilli dogs, buffalo wings and green chilli cheese fries.

Meat Liquor has multiple locations in London as well as around England. 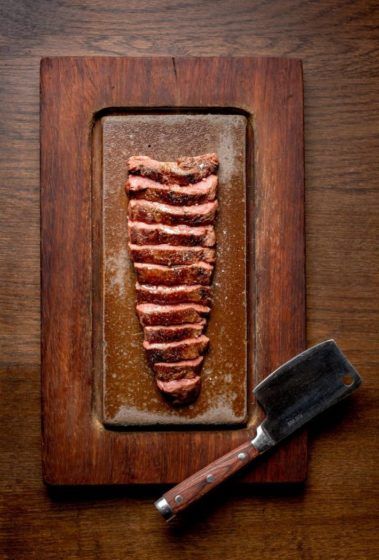 Flat Iron is an affordable steakhouse that serves only one cut of steak: the flat iron (£12 or S$22). They source their beef from sustainably managed farms, including their own herd based near Thirsk in North Yorkshire.

If you need options, select some of their sides from chips cooked in beef drippings, roast cauliflower with parsley and mint, and creamed spinach. Wines range from grower champagne to negroamaro, and there’re signature cocktails and craft beer too. 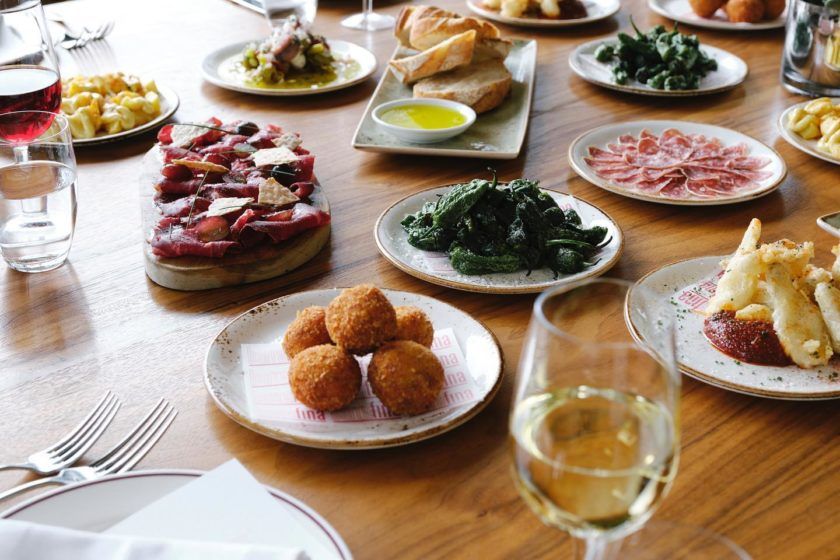 Barrafina is a modern Spanish tapas restaurant that originated on Soho’s Dean Street. They now have four locations in London, and each restaurant has an open kitchen and a marble-topped bar where guests can watch the chefs at work.

The a la carte menus comprise authentic regional dishes from around Spain like croquetas, Iberico ham, padron peppers and banderilla, a type of pickled vegetable skewer. There’s also a daily changing specials menu unique to each restaurant and an extensive list of sherries, cava, and Spanish wine.

Barrafina has four locations in London. 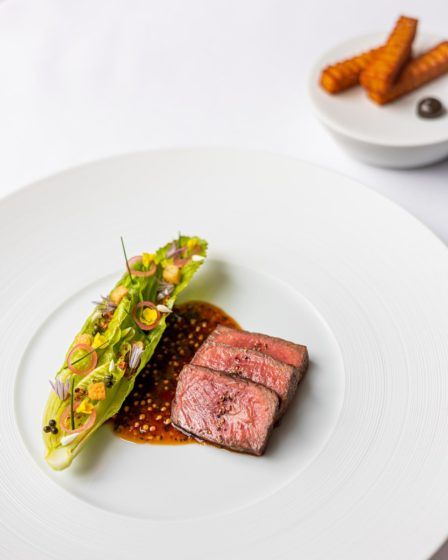 For dinner, 45-seat restaurant offers two tasting menus ranging from £140 to £170 (S$253 to S$308), which includes lobster ravioli, roast pigeon and veal sweetbread with truffles. For something more extravagant, the Carte Blanche menu (£220 or S$398) leaves you in the hands of the head chef, who would create a bespoke menu for you. 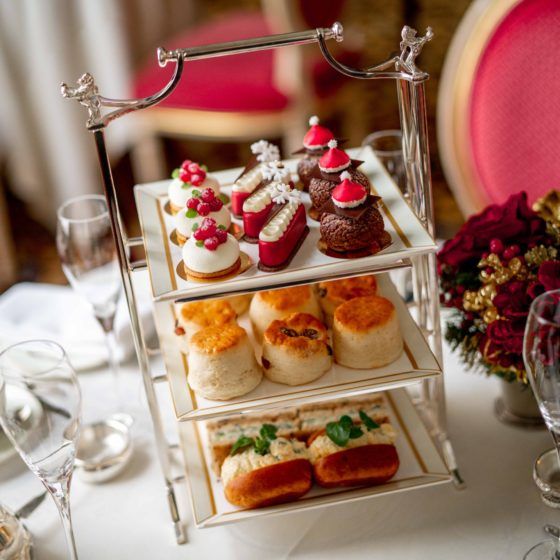 Indulge in a quintessentially British tradition with an afternoon tea (£60 or S$100) at The Ritz London. The spread consists of sandwiches, freshly baked scones with Cornish clotted cream and strawberry preserve, followed by teacakes and pastries. To drink, a selection of 18 different types of loose leaf teas including the exclusive Ritz Royal Blend Tea.

This all takes place in spectacular Palm Court, flanked by high walls of gleaming mirrors, romantic birdcage chandeliers and a soaring, vibrant floral display at the centre of the room. Start practicing your tea pinky. 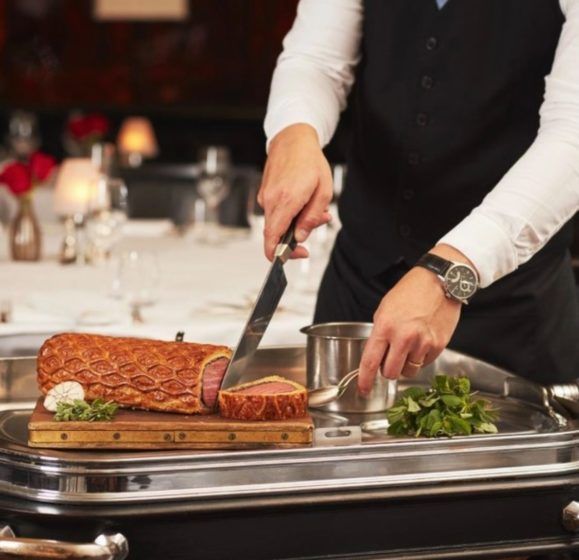 Savoy Grill is legendary institution that has seen everyone from Winston Churchill to Marilyn. Monroe at its tables. A Gordon Ramsay restaurant, the menu comprises of classic British and French dishes including his signature beef Wellington and crepes suzette, flambeed at the table for some dining drama.

Grills from the wood-fired charcoal are another signature, from a hearty sirloin on the bone to a cote de boeuf. There’s also a showcase of British produce with lobster thermidor, Scottish langoustines, roasted Orkney scallops and grilled Dover sole. Come Sundays, the restaurant serves a traditional beef rib with Yorkshire pudding. 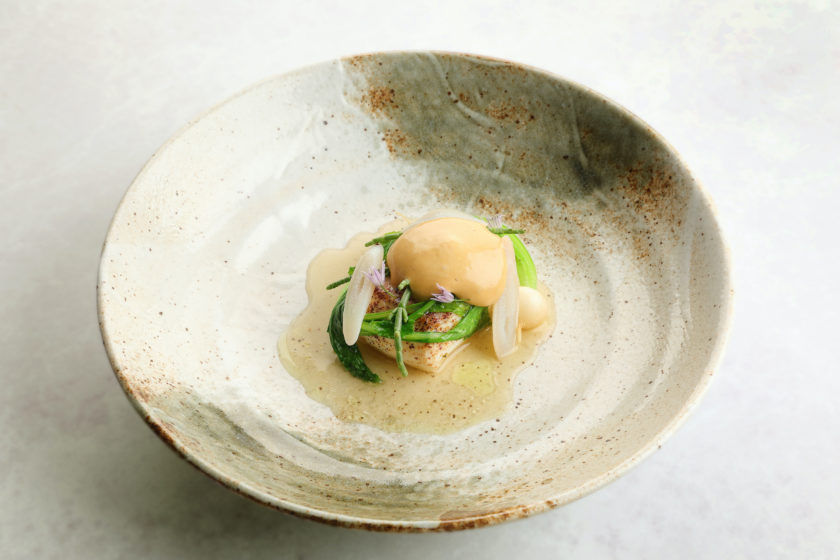 The Cellar is led by chef and owner Billy Boyter, who grew up in a small house by the harbour in Cellardyke, only 5 minutes from the restaurant door. He works with local farmers, suppliers and producers to source quality seasonal Scottish produce, and also forages for ingredients from the coastline and countryside.

The restaurant offers just one tasting menu (£85 or S$154 for dinner), which includes local lobster thermidor with pickled wild flowers, Scottish halibut with Arbroath smokie – a type of smoked haddock, and sorrel and sheep yoghurt sorbet with rosé cider and strawberry. Dessert is a mousse of meadowsweet and crowdie, a Scottish cow soft cheese, with raspberry and lemon verbena.