Home > Travel > Destinations > Love wine? Here’s why Porto should be your next holiday destination instead 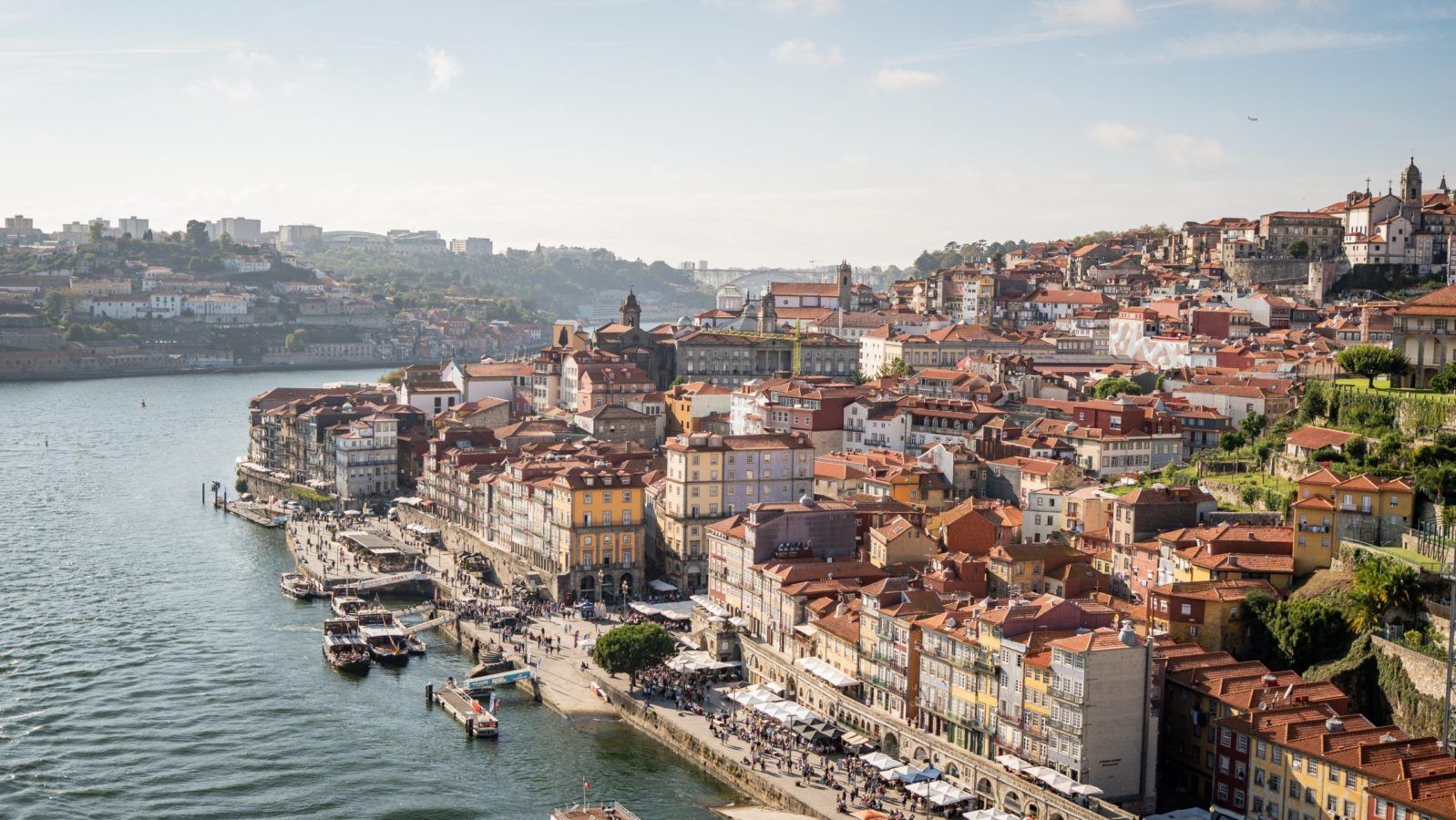 Travel
Love wine? Here’s why Porto should be your next holiday destination instead
Share this article
Next article

I arrived in Porto via the sea, though unlike generations of visitors, I didn’t come by ship. Instead, I was transported here by a morsel of tuna tartare, served with an oyster on a mottled stone that echoed the oyster’s stippling, and a juicy scallop returned to its shell and painted tableside with a lemon sauce.

The dish is the work of chef Rui Paula at two-Michelin-starred Casa de Chá da Boa Nova, a ridiculously glamorous former teahouse on the seafront designed by Porto’s great architect, Álvaro Siza Vieira. The turquoise vista beyond the terrace offers a picturesque reminder that the city owes its beauty and fame (not to mention its legendary fortified wine) to its strategic position on the Atlantic coast.

By the time my husband and I made our way back into town, we had eaten 12 perfect courses and, via an exceptional wine list, drunk our way from Monção, on the northern border with Spain, to Ribatejo, just above Lisbon. With over 250 indigenous grape varieties, Portugal is one of the world’s most underrated wine-producing nations.

In Porto proper, the graceful iron arc of the Luís I Bridge spans the Douro River, multicoloured buildings rising in tiers on either side. The vast, orange-roofed port cellars face the Bishop’s Palace and the Cathedral; the banks’ steep symmetry is breathtaking. Beyond are beautiful stone churches and houses clad in the famous azulejo tiles. It turns out that it’s as hard to stay blasé about the scenery in Porto as it is to stay hungry.

And that’s impossible. “People here snack all the time! They live around food,” laughed Carine Castro of Culinary Backstreets tours. Her tour was not for the unfit: nearly six hours of walking around Porto’s old town, with frequent pauses for snacks, many practically a meal in themselves. The highlight was cachorrinhos, pork sausage and melted cheese with spicy sauce in crusty bread, from Cervejaria Gazela, a simple hangout with high stools and beer on tap that was featured in Anthony Bourdain’s Parts Unknown.

After saying goodbye to Castro on the quayside, we figured all that walking had earned us an early aperitif. In the Museu do Vinho do Porto’s bar, I questioned the barmaid about white port, the red’s lighter, less famous sibling, usually served with tonic before dinner. She whipped out a range: Niepoort’s 10-year-old, Royal Oporto’s Extra Dry, Dow’s Fine White, and even a Lagrima, the intensely sweet and viscous version, more dessert wine than an aperitif. For the curious, several port houses—Quinta do Noval, Sandeman, Cálem—have tasting rooms, tours, or both, directly opposite the museum.

I met up with Zoe Graham of Churchill’s, which was founded by her father, John Graham, after his family sold their generations-old port house. She was delighted to hear I was trying so many local delicacies but insisted I couldn’t leave the city without tasting a francesinha, a monster sandwich of ham and sausage slathered in cheese and a beer sauce. It sounded terrifying. (“Great hangover food,” she said.)

I eventually succumbed to one at T&C, one of the dozen eateries in the new World of Wine museum complex. In this cosy, low-lit enclave of stone and wood, once a port wine cellar, the sauce features port instead of beer, which feels right.

WoW was conceived by Adrian Bridge, CEO of The Fladgate Partnership, which owns multiple port houses. There’s plenty to discover in the complex’s wine “experience” (Bridge worries the word “museum” is too static), which inventively simplifies the subject without talking down to wine-lovers. The cork experience is also great fun, with information on NASA’s use of this versatile bark in space shuttles, and the doubtful pleasure of finding out how many wine corks you weigh (which I wish I’d tried before that francesinha).

Our final meal in the city was as fabulous as our first but radically different. In the sliver of garden behind Almeja, with his dog and tiny son toddling around, young chef João Cura served falafel, cinnamon-sprinkled vegetable samosas on a yellow azulejo tile, and amberjack, a tender fish from the Azores islands. These far-flung influences were a parting reminder that no port lives by local goods alone and that in Porto, ideas and ingredients flow in and out as easily as water, or wine, or people.

TAP Air Portugal flies nonstop from Newark, New Jersey, to Porto. Take a private tour with 2021 Food & Wine Game Changer Modern Adventure on a seven-night trip through Lisbon, Porto, and the Douro Valley from 24-30 July hosted by chef and cookbook author Chris McDade and his sommelier wife, Natalie Grindstaff (from US$6,900 on modernadventure.com).

You could also arrive by boat: Scenic River hosts a regular 11-day cruise from Porto along the Douro River that includes visits to vineyards and estate tastings (from US$5,095 on scenicusa.com). Portocvb.com and visitporto.travel are great resources for those planning a trip to the city and surrounding region.

As well as marvellous carved ceilings (one whimsically hung with suspended books), this 19th-century former school is a hotel and home to Blind, a monochrome bar and poolside restaurant where we ate plenty of fish and drank wines from the nearby Douro Valley. (Rooms from US$262 on torelpalaceporto.com)

The Fladgate Partnership responsible for the WoW also owns this vast, white luxury hotel with a decanter-shaped pool, a Michelin-starred restaurant, and stunning views. (Rooms from US$389 on the-yeatman-hotel.com)

A river of wine

Until it was dammed in the 1960s, the journey up the Douro from Porto was hellish, and the winding roads were worse. At Quinta Nova de Nossa Senhora do Carmo, a Douro Valley winery and boutique Relais & Châteaux hotel, there is old footage of bargemen frantically negotiating the wild river, their shallow boats piled precariously with barrels.

These days, the trip is easy and breathtakingly beautiful. (There’s even a train from Porto to Pinhão.) Most estates on the river’s steep, vine-covered slopes offer tastings, tours, and food. Quinta do Bomfim even has a fascinating mini museum. I took a peaceful river cruise past vines, famous estate names, and the odd dramatic granite outcrop.

Mostly, though, I ate, drank, and gawped, usually at the same time: in the cool green dining room at Quinta da Pacheca, a winery hotel with 10 standalone barrel bedrooms among the vines (rooms from US$282 on quintadapacheca.com); above the Bomfim vines at Casa dos Ecos, a laid-back pop-up from Michelin-starred chef Pedro Lemos; on the terrace at Quinta da Roêda, home of Croft’s port; or over a superb dinner at Quinta Nova’s restaurant, Terraçu’s, where the sommelier heated tongs to twist the entire neck off a bottle of 1997 port.

Where to eat & drink

Snacks are hard to forgo in Porto. One evening, tantalised by all the tiny, brightly lit eateries, we tried, and failed, to stop for a small plate in every interesting-looking joint we saw, wolfing bifanas—buns filled with tender pulled pork marinated in garlic and spice—in Conga and hitching ourselves onto barstools at Pedro dos Frangos for piles of cumin-flavoured tripe, sausage, ham, and white beans.

Porto’s inhabitants are known as tripeiros, or tripe-eaters, supposedly because they donated all their meat to the army in the 15th century, leaving nothing but offal. If that’s not your bag, stop by for the fresh sardines at Salmão along with a glass of Vinho Verde, the region’s crisp white wine, or delicious, market-fresh fish casserole at tiny Taberna dos Mercadores in the riverside Ribeira quarter.

Be sure to finish with cake and port at Capela Incomum, a funky little converted chapel.

Travel Wine Portugal Destinations Porto
Nina Caplan
Banyan Tree
Sign up for our newsletters to have the latest stories delivered straight to your inbox every week.