7 of the slickest luxury hotels in Ibiza

In the words of the infamous Vengaboys: “We’re going back to Ibiza, back to the island. We’re going to have a party in the Mediterranean sea.” But before you party hardy, there are some luxury hotels in Ibiza you’ll need to check out.

While it’s true that Ibiza was popularly known to be a party island, there are some other amazing activities you can get into while you’re here. Spend your days languidly at some jaw-droppingly beautiful beaches—the northeastern part of the island is home to several quiet beaches if you have the time to drive over. If you fancy yourself a nature lover of sorts, make sure you get a boat to bring you over to the island of Es Vedrà. It’s a protected nature park where you can explore the island and try out some water activities.

Meanwhile, engross yourself in some culture at the UNESCO-listed Dalt Villa, located in the highest and oldest part of Ibiza Town. Check out all seven bastions of the fort to learn of the different stories that each tells. Then, visit the Ibiza Cathedral which looks out to the waters. Inside are 14th and 15th-century gothic panel paintings as well as gothic monstrances dating all the way back to 1399.

Finally, you’ll need to hit up the night clubs to find out why Ibiza is so known for partying. One great place to find that out is at Amnesia, a massive nightclub with insane theatrics. Visit on Sunday nights to experience Elrow, a crazy setup with trapeze, confetti, glitter, and world-class DJs on the decks. Afterwards, head back to one of your luxury hotels in Ibiza. At Pure House Ibiza, upon checking in you’ll immediately feel at home—only better. This four-suite villa is surrounded by pine forests and olive groves, sitting on a 30-acre fruit estate. Despite being surrounded by nature, you’re only actually four kilometres away from Ibiza Town and Las Salinas, a nearby beach club.

The vibe at Pure House Ibiza is relaxed, carefree, and barefoot luxury. Meanwhile, the suites are kept to neutral tones with tribal elements and a mix of Balinese designs. The 23-metre pool is a must to check out, as is the spa with a variety of wellness treatments.

Other than its world class restaurants, Nobu also has a hotel offshoot here in Ibiza. The Nobu Hotel Ibiza Bay is a sleek, five-star hotel set on Talamanca Bay. Everything about this place screams “posh beach resort”, from its stark white four-storey building to the light-filled atrium and stunning pool area.

There are 152 spacious rooms and suites with most of them having a sea view. Blue and gold are the main decor colour palette here with floor-to-ceiling windows letting in plenty of natural light and the view of the sparkling sea. The marble bathroom is decadent with bathroom amenities by Natura Bissé and a large rainshower.

Within the hotel compounds are two stone pools, one of which is for families. There is a Six Senses spa for some world class spa indulgence, but what really stands out are the four restaurants in the hotel. Naturally, Nobu is one of them with the restaurant’s signature specialties. There is also Peyotito serving up modern Mexican dishes with Mediterranean influences. Chambao is the relaxed dining outlet with fresh local cuisine, while Celicioso, a cafe, has a range of healthy superfoods in store for you. When we say the La Torre del Canónigo is historical, we mean it. Much of the original structure of the building still remains. Even the reception area is built around the city’s first defensive wall, aged over 1,000 years old. But it is by no means crumbling. The hotel maintains some decadent touches, like the crystal chandelier and velvet sofas.

The swimming pool, although not one of the more modern, infinity styles, is still quite a sight to behold thanks to its unprecedented views of the harbour below.

The rooms are similarly lavish, kept to neutral tones and marble finishes for an elegant feel. Be sure to dine in Kyüppido, the in-house restaurant that dishes out a Japanese-Mediterranean fusion with high-end ingredients such as caviar, truffles, and suckling pig. Should the party life in Ibiza not suit you, hide away in the rustic retreat of La Granja. This 16th-century farmhouse is surrounded by pine trees, hills, and traditional farmland. Expect communal dining areas, plenty of reclaimed wood furniture, and a gorgeous swimming pool that seemingly blends into its surrounding nature.

Only 10 guest rooms are available, all designed in the traditional Ibizan style. When we say traditional, we mean it seriously—the walls are thick and the windows are small, an old design method that helped cool the room in the heat of the summer. This means there’s no need for air conditioning, although you can request for a portable one should the heat get to you. Floors are concrete, the decoration is minimal and chic, and the suite’s bathroom is quite the treat.

While other hotel restaurants may boast a specialised menu, there isn’t one in La Granja. However, the food served is very much Spanish with most of the produce coming from the farm in the property. 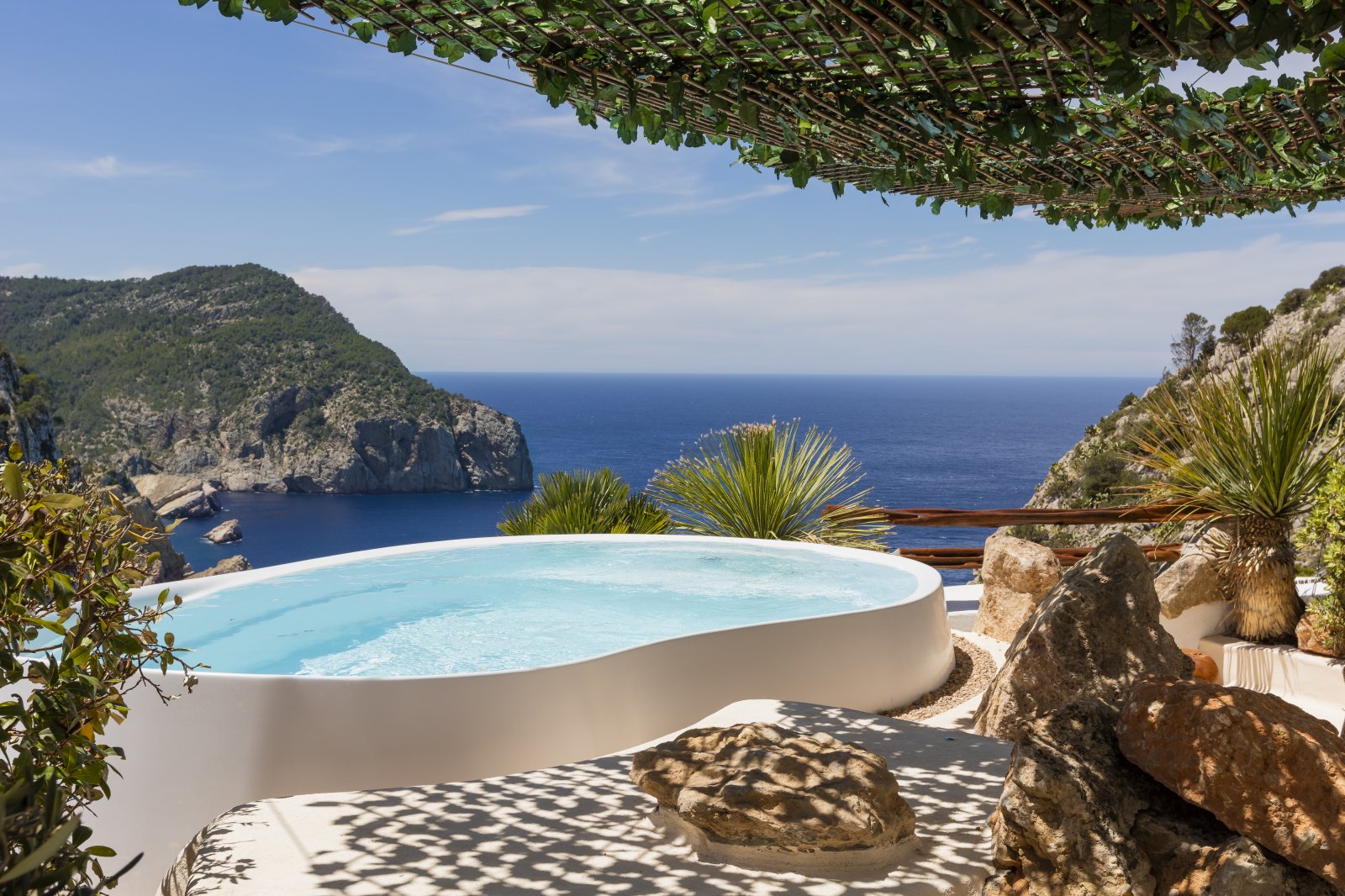 Built in 1971, the Hacienda Na Xamena was the first five-star hotel in Ibiza—nearly 50 years later, it still looks as remarkable. Built into the side of the cliff with unobstructed views of the Mediterranean sea, this hotel is the perfect romantic getaway for couples. The hotel was designed by Belgian architect Daniel Lipszyc who wanted to integrate the hotel into its natural surroundings with a hippie Ibiza vibe, yet posh.

There are 77 rooms and suites, nearly all of which boast spectacular sea views. Higher-tier rooms have their own garden terraces and mini pools. The hotel is home to a two Michelin-star restaurant—Eden Restaurant—helmed by Fran Lopez, the world’s fourth youngest chef to receive a Michelin star. 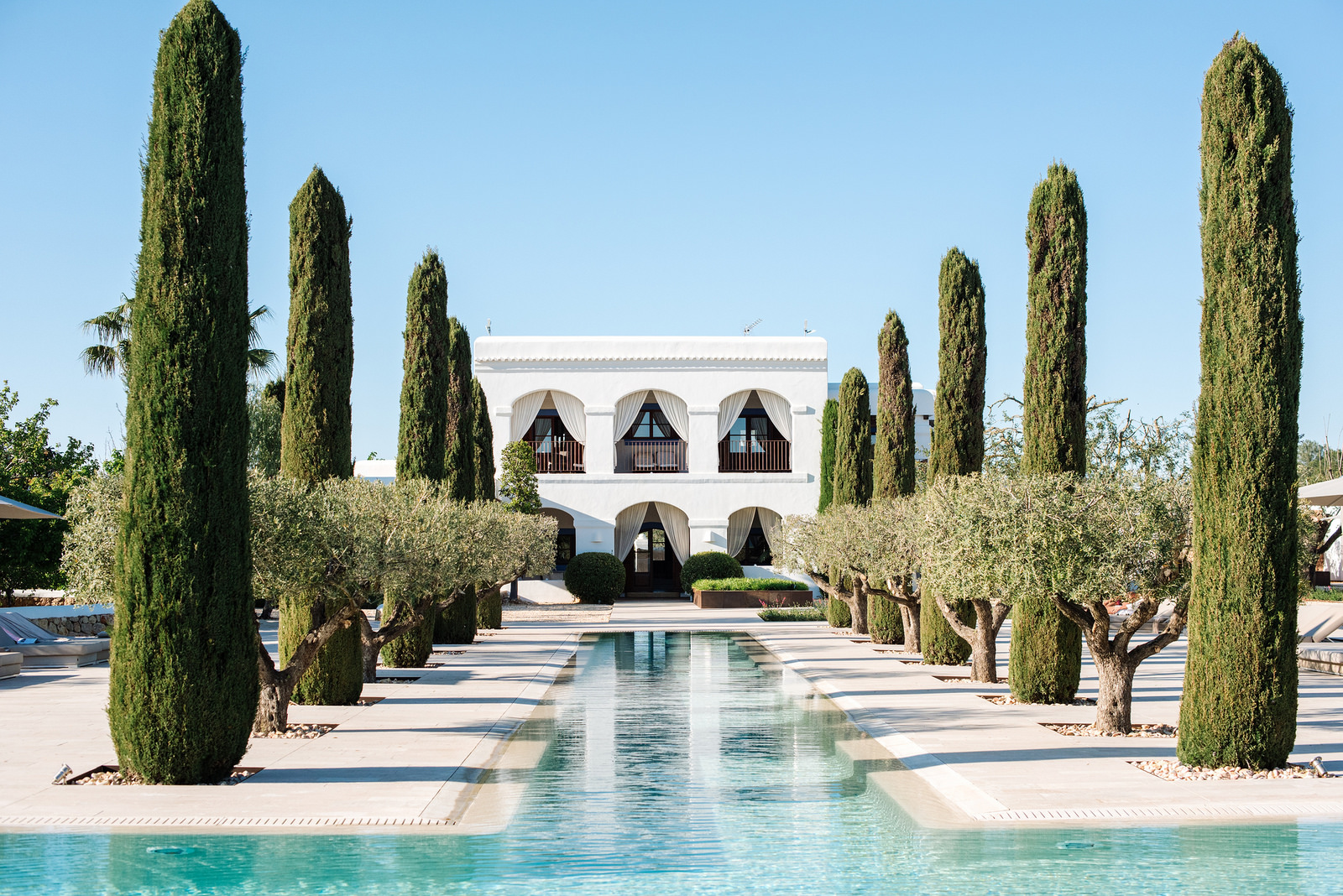 Laidback, luxurious, gorgeous, and secluded—these words best describe the boutique hotel that is Ca Na Xica. Located in the countryside of San Miquel de Balansat, this sophisticated hotel is pristine white on the outside, with the main house designed like a Spanish finca. There are 20 rooms and 14 suites in white and neutral tones. All rooms are spacious with wide terraces overlooking olive and fig trees, and a gorgeous light-filled glass-sided shower. Be sure to dine in the in-house restaurant Salvia, which serves up delicious Mediterranean cuisine. Catch some sun in the T-shaped seawater pool too, for some pretty Instagrammable pictures. 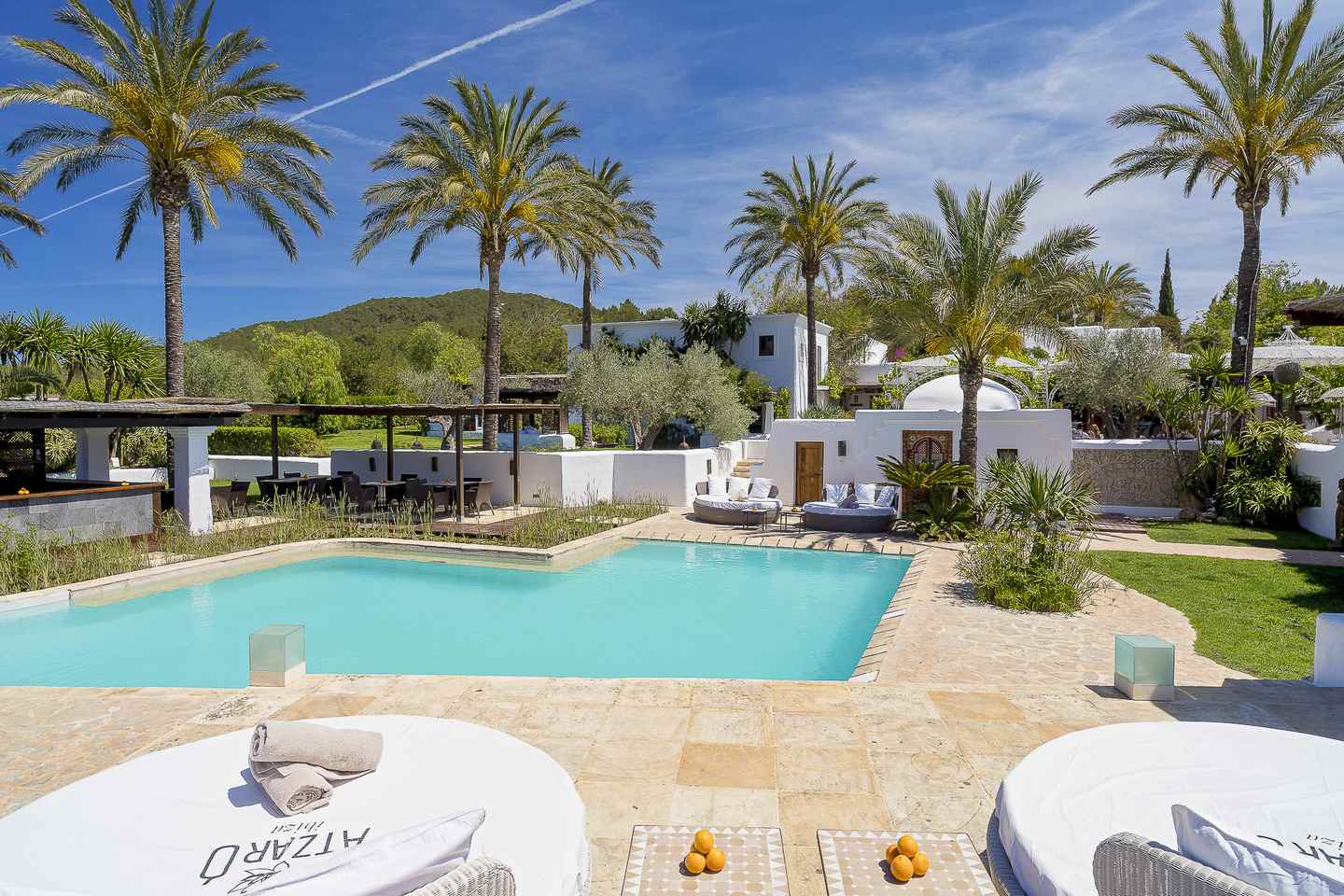 If you love the spa, then you’ll love Atzaro, one of Ibiza’s most known spa hotels. The style is luxury agroturismos (Italian farm-stays)—chic, soothing, yet maintaining the traditional Ibizan finca design. As a spa hotel, there are many ways you can indulge here, from an open-air spa to a Balinese temple-style spa, hammam, a yoga and pilates pavilion, and the iconic main pool. The 24 rooms and suites all come with teak four-poster beds and white linen, most of which come with their own garden terraces and plunge pool. The design is minimal with white walls and wooden beams. Be sure to have dinner in Orange Tree, a popular restaurant thanks to its courtyard location and dramatic draping vines, while serving up large portions of hearty food with a good selection of local wines.

see more
Luxury Hotels hotels in ibiza Ibiza
PohNee Chin
Editor, Kuala Lumpur
Poh Nee is the editor and writes about travel and drinks. When she's not living out her holiday dreams via Google Earth and sipping on an Old Fashioned down at the local bars, you can find her snug at home bingeing on Netflix and mystery fiction.
Travel Drinks