Las Vegas is the hypnotic home of vices.

Most fondly referred to as Sin City, the desert oasis is where indulgence takes precedence: walk down the streets and you will find a congregation of high rollers strolling into casinos and lined up vans of husbands and wives-to-be on their last hurrah.

Above all, Las Vegas is home to an entertainment scene unlike any other. Big-budget shows from megastars such as Lady Gaga, Christina Aguilera, Aerosmith and Cardi B can be found here not to mention classic A-listers like Celine Dion.

Before you plan your trip, note that the Las Vegas Strip houses some of the world’s biggest and most outrageous high-end hotels. From man-made Egyptian pyramids in Luxor to fairytale castles in Excalibur, the possibilities are endless when it comes to your imagination. These over-the-top plush four-poster beds can be an assault to the senses, especially after a full day of partying.

Hence, we’ve rounded up some of the more intimate, boutique hotels for a restful night (or day!) in Sin City. Nomad is a slice of serenity on the busy Las Vegas Strip. Even though it shares some of its major amenities with its bigger, not-so-boutique sister next door, Park MGM, it still manages to maintain a piece of old-world charm with its opulent interiors and cosy guest rooms. Each of the 293 rooms and suites have been fashioned with navy blue accents against a sea of white. This, coupled with details like the steamer-trunk minibars and velvet couches immediately add a touch of elegance to the room. As for dining, find yourself in the discreet Nomad Restaurant, inspired by the iconic Library of NoMad New York. It is set in a soaring space with floor to ceiling shelves that house over 20 thousand books from David and Peggy Rockefeller’s personal collection. If you’re looking for a late-night tipple or two, the intimate Nomad Bar sets the scene with some live jazz and mouthwatering cocktails. 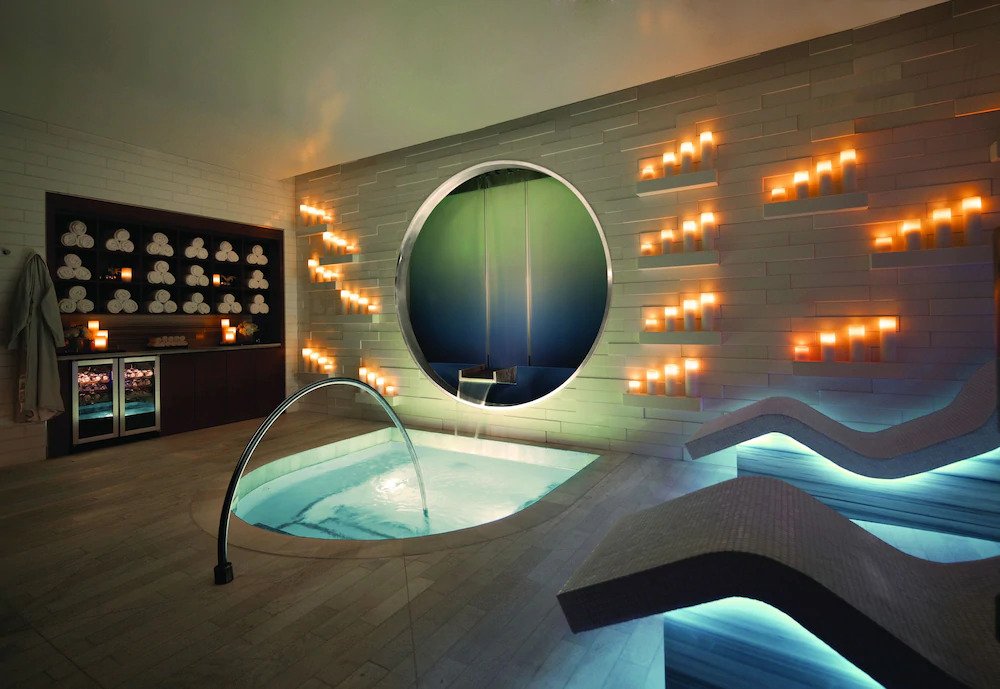 Despite its cold, sleek facade, Vdara Hotel is a safe haven for anyone looking to relax. It’s biggest draw? The two-storeyed spa, with a menu that serves ‘European heat experiences’. The signature stone and salt scrub treatments have also been on the receiving end of some the highest industry ratings around. Contemporary rooms may be the norm in many cities, but here in Las Vegas, this sense of normalcy is few and far between. Each room is furnished with dark woods and black trimmings, topped off with horizontally stretched windows that look out to a stunning panoramic view. 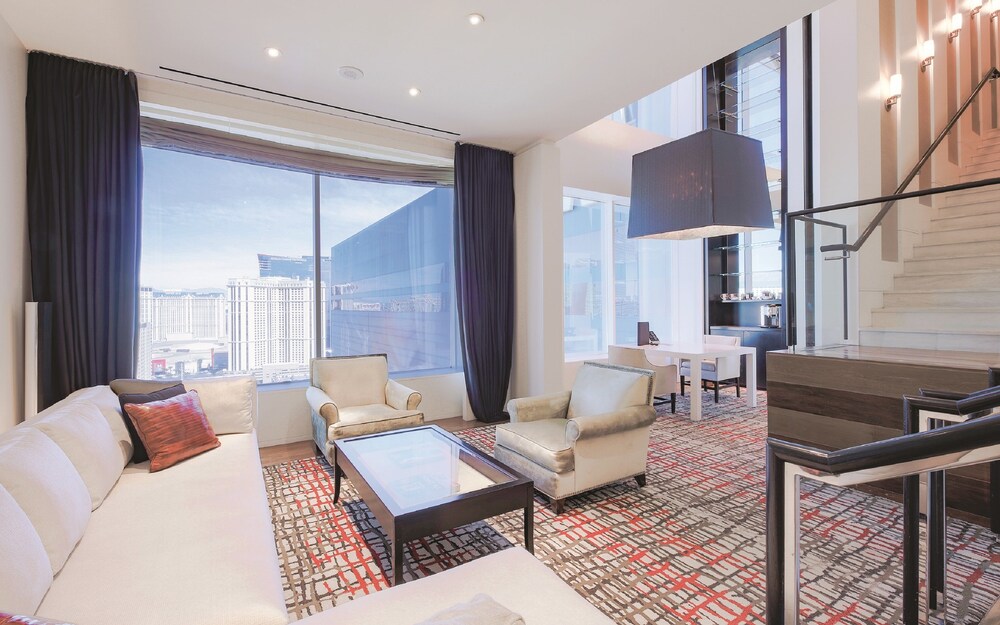 There are many hotels within a hotel along the Las Vegas Strip, but Skylofts at MGM Grand is unlike any other. All of its 51 loft-style rooms occupy the top two floors of MGM Grand Hotel and Casino, making it an exclusive retreat from the bustle down below. Here, find one-, two- and three-bedroom varieties, each furnished with a sleek New York-style decor. Details like the Colombian artwork, black and white statues, and personalized butler service give guests a swanky residential feel quite unlike the rest of the MGM Grand. 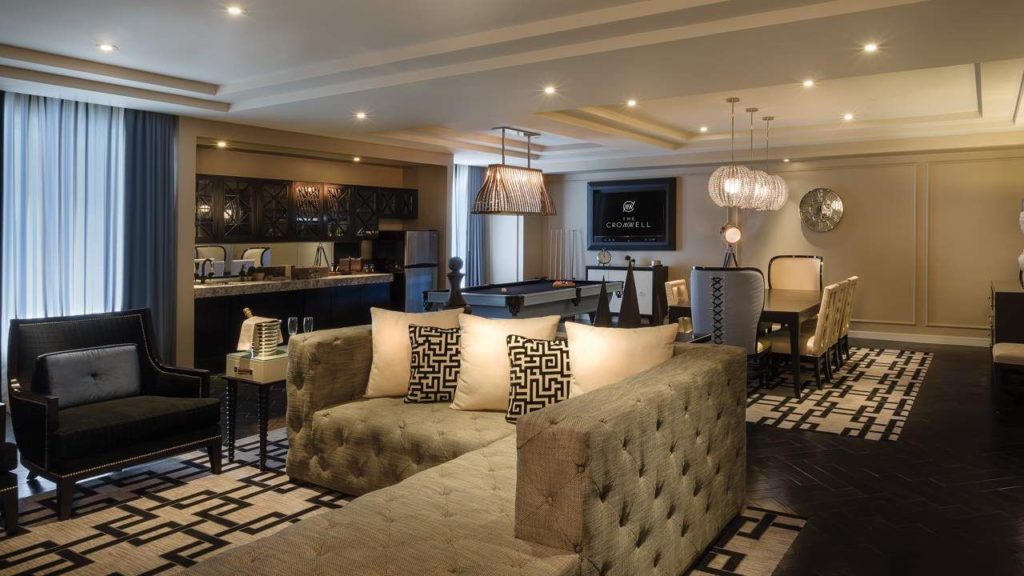 Fashionable guests can consider a stay at The Cromwell, a chic property located in the thick of the Las Vegas Strip heat. Each of its 188 sophisticated rooms come are broody and elegant — royal plums and dark woods take centre stage in its design. Hardwood floors with leather and velvet furnishings create a modern vintage atmosphere, and the tiled bathrooms come with walk-in rain showers that are relatively spacious. The property is fitted with a stylish rooftop pool, Drai’s, open seasonally from March to September. The area also doubles as a nightclub, with live music in the lounge. Feeling peckish? Dine at Giada, the first restaurant by award-winning celebrity chef Giada De Laurentiis. Here, find a good selection of Italian classics that are sure to be enjoyed by everyone. 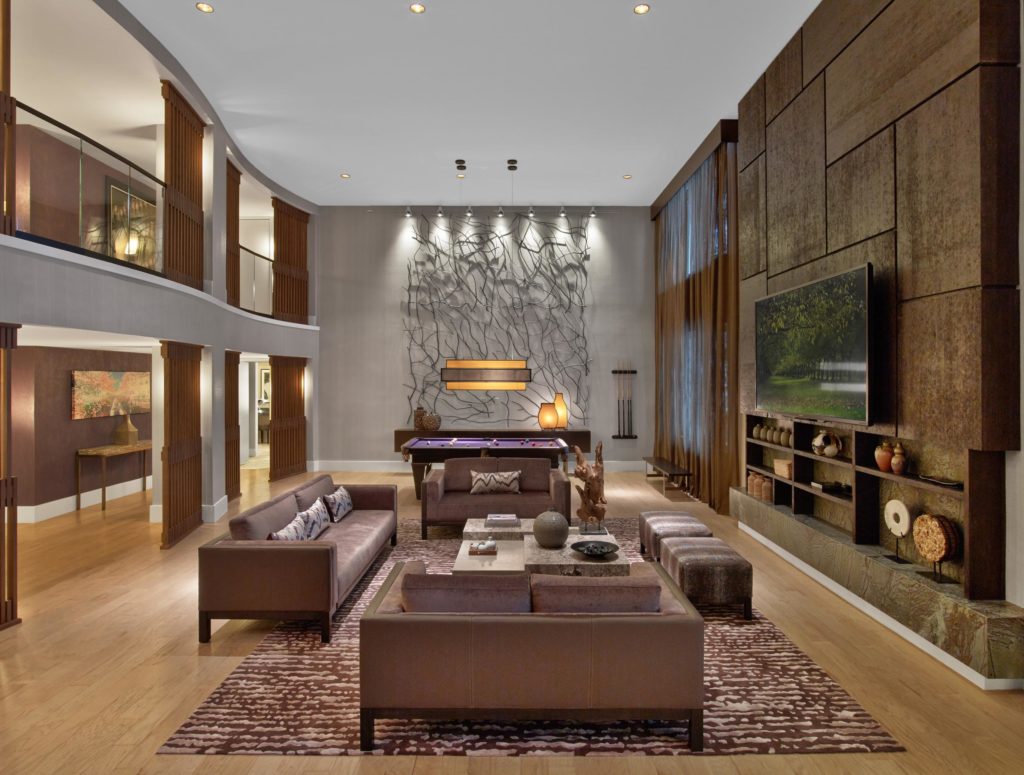 Caesars Palace holds the reputation of being a themed hotel, very much like Luxor and Excalibur. In 2013, the property launched Nobu Hotel, a boutique hotel located within compounds of Caesars Palace. The 181 room hotel took over the previously named Centurion Tower, and is the brainchild of Chef Nobu Matsuhisa and Caesars Palace. Spanning 12 floors of the tower, its minimalist decor have been accented by stronger Japanese accents (mainly natural stone, black lacquer and shimmering bronze), making it a calming respite compared to its encompassing resort. Each of its rooms and suites are decked out in aromatherapy sleep oils and teas, which make them perfect accessories to the incredibly comfortable beds.

Boutique Hotels Las Vegas Sin City Las Vegas hotels Boutique Hotels in Las Vegas Nevada Hotels in Las Vegas
Jocelyn Tan
Writer
Jocelyn Tan is a travel and design writer who's probably indulging in serial killer podcasts or reading one too many books on East Asian history. When she actually gets to travel, you can find her attempting to stuff her entire wardrobe into her luggage. Yes, she's a chronic over-packer.
Travel Design