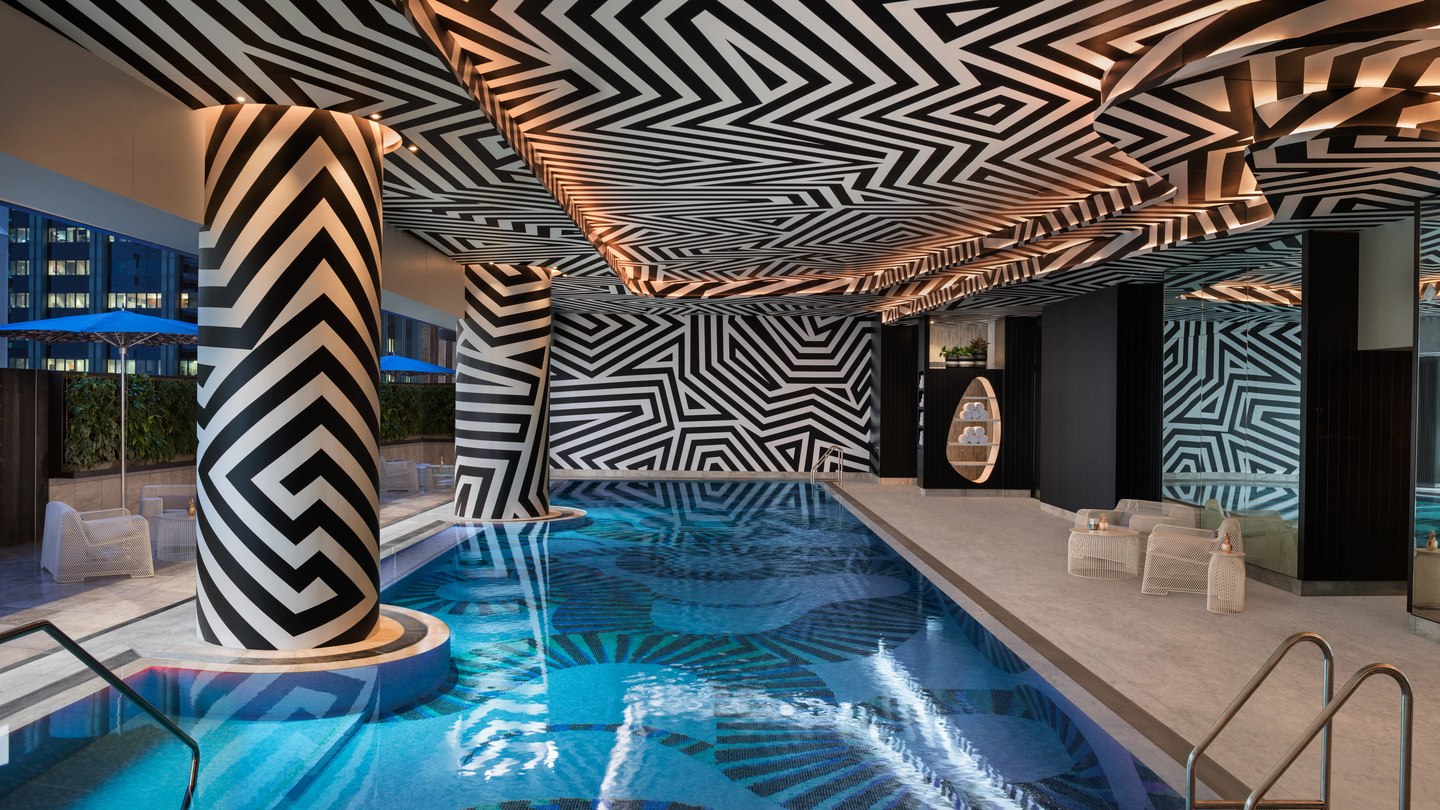 Check in: W Brisbane is where music, design and indigenous references embrace

Travel
Check in: W Brisbane is where music, design and indigenous references embrace
Share this article
Next article

When it comes to Australian cities, Melbourne and Sydney each have an allure of their own. Yet, a name that should be on more traveller’s radar is Brisbane, a unique capital city with a river meandering its way around the landscape.

While unjustly known for being a sleepy city in the past, Brisbane is shedding its undeserved reputation with the entry of W Brisbane, which officially launched last week. Part of the city’s exciting quarter, the hotel marks the return of the W Hotels brand to Australia since the closure of the first W Sydney (now Ovolo Woolloomooloo Sydney) which opened in 2001.

“W Sydney was the first international W outside of the United States. The hotel had such a profound impact on Australia at its time,” Global Brand Leader Anthony Ingham explained. “As we opened new Ws around the world in the last five or six years, we’ve seen an unusually high proportion of Australian guests in properties such as W Barcelona or Bali. I attribute it to the role W Sydney had in 2001 in doing things no one had ever seen before.”

“So the re-entry of W into the Australia market was a very a big deal, and we were very wary of the expectations that existed in the Australian market for the first W to come back into Australia,” Ingham added.

W Brisbane is located in the heart of the city, a 20-minute drive away from the airport. Its spot on the banks of the iconic Brisbane River, also called The Brown Snake, ensure that rooms have picture-perfect views of either the river or city.

Getting around is easy. The city centre and attractions such as the City Botanic Gardens and 1920s heritage-listed City Hall is just a stroll away. Otherwise, guests can walk to the nearest CityHopper station, Brisbane’s free ferry service which travels along the Brisbane River, stopping at some of the city’s main precincts, such as South Bank, Maritime Museum, North Quay and Dockside.

Additionally, South Bank’s cultural precinct is located across the river, connected by the Victoria Bridge. One attraction to check out is the Queensland Museum, which is the state’s centre for natural history, cultural heritage, science and human achievement, as well as the Gallery of Modern Art (GoMa), located in a contemporary glass-panelled building which lights up every night with a permanent installation by light artist James Turrell. The up-and-coming precinct is also home to some of the city’s best bars, cafes and restaurants.

Graham and his team use the hotel’s theme of “A River Dreaming” as an ode to its prime locale on the banks of the iconic Brisbane River, which has in recent years become the buzzing epicentre of the city’s social scene; weaving in influences from Australia’s indigenous roots and colonial heritage.

Believed by the aboriginal community to represent a serpent coming from the hills to the river, this story is played out in the hotel’s design, with references of the serpent found everywhere from the ballroom carpet to the reception desk. Various curvilinear lines are used to represent that idea.

Earth tones, sedimentary layers, frayed edges and raw beauty associated with the Australian outback is featured, starting from a staircase of timber river reeds at the arrival entrance and continuing throughout the hotel’s public spaces. “The carpets, for example, were designed to look like the water of the river, which is not exactly blue but brown. It sparkles in the sun, and it’s glorious. There’s this sort of shimmy shimmy in the water of the river and we’ve represented that in the rugs and carpets,” Graham said.

These organic formations are contrasted by the focus on contemporary art, adorned with loud and vibrant artwork from celebrated Australian artists including John Nicholson, Lucas Grogan and Reko Rennie. A cheeky nod to the Australian sense of humour can be found throughout.

Out of W Brisbane’s 312 guestrooms, ranging from the standard “Wonderful” rooms to the “Extreme Wow Suite”, 32 are suites. Each room looks out to either breathtaking river or city skyline views.

We stayed at the light-filled Wonderful King room, which boasts views of the river, South Bank and beyond. As with other parts of the hotel, the interiors infuse elements of Brisbane’s culture, such as white walls inspired by VJ wall panels found in traditional Queenslander homes, a 1940s post-war inspired mix bar, and a 10-gallon drum ‘outback bath experience’.

On occasions guests choose to stay in (not that we’d blame them), each room is well-equipped with the latest in technology and entertainment, such as a 55 inch LED TV to Bowers & Wilkins Bluetooth speakers, which guests can use while shaking up a cocktail at the impressive W Mixbar.

You wouldn’t think that Brisbane city needed another good restaurant or bar. That is until W Brisbane came onto the scene and amped up the city’s F&B offerings with its restaurant and two bars. Walking into the hotel, one arrives at the main Living Room Bar, which has already cemented its reputation as the city’s post-work drinks hotspot. Alternatively, head up to W Brisbane’s WET Bar, a signature spot for W hotels worldwide. Since its soft launch early this year, it has become Brisbane’s trendiest spot for a night out.

The restaurant is also the breakfast spot for hotel guests, offering a variety of options ranging from hot bowls such as teriyaki glazed eggplant, creamed corn and seaweed to gluten-free and vegetarian options such as the coconut chia pudding or mango bircher with passionfruit and kiwi fruit.

When not taking a dip at W Brisbane’s strikingly-designed 20-metre pool of the WET Deck located on the fourth floor, indulge in a treatment at the AWAY Spa. The spa features a sublime treatment menu of  Sodashi™ and Skeyndor™ facials and massages in addition to perfectly pampering beauty treatments.

The AWAY Spa offers an escape from the outside world, with six gorgeously-designed treatment suites, including one double treatment suite and two mini-treatment rooms for manicure and pedicure. The minute we got to the hotel, we dropped our bags and tried out a 45-minute Jet Lag treatment, a deep tissue massage which can help loosen tight muscles caused by sitting for long periods. Our therapist explained that the message helped to stimulate the production of melatonin needed to promote healthy sleep cycles, helping us adjust to a new time zone quicker.

Other highlights at the AWAY Spa include Vitality Pools, Relaxation Pods, Rain Showers, His and Hers Saunas and Aromatherapy Steam Rooms.

W Brisbane, the first of the three W Hotels planned for Australia’s major cities, is a great look into the success of W’s re-entry into the Australian market. For a brand that seems to gel well with the free-spirited culture of the Land Down Under, its existence in the country seems almost like a no-brainer — and we’re looking forward to seeing what the other two Australian properties will offer.

“W Sydney and Melbourne are still under construction, but I think W Brisbane is a great example of what W is and what W can be for a market that hasn’t seen a hotel like this before,” Ingham said.

Travel Hotel Review Australia W Hotels Brisbane w brisbane
Dewi Nurjuwita
Senior Writer
Dewi Nurjuwita is a travel and design writer who can be found exploring the streets of foreign cities with passport in one hand and a cup of coffee in the other.
Travel Architecture Interior Design