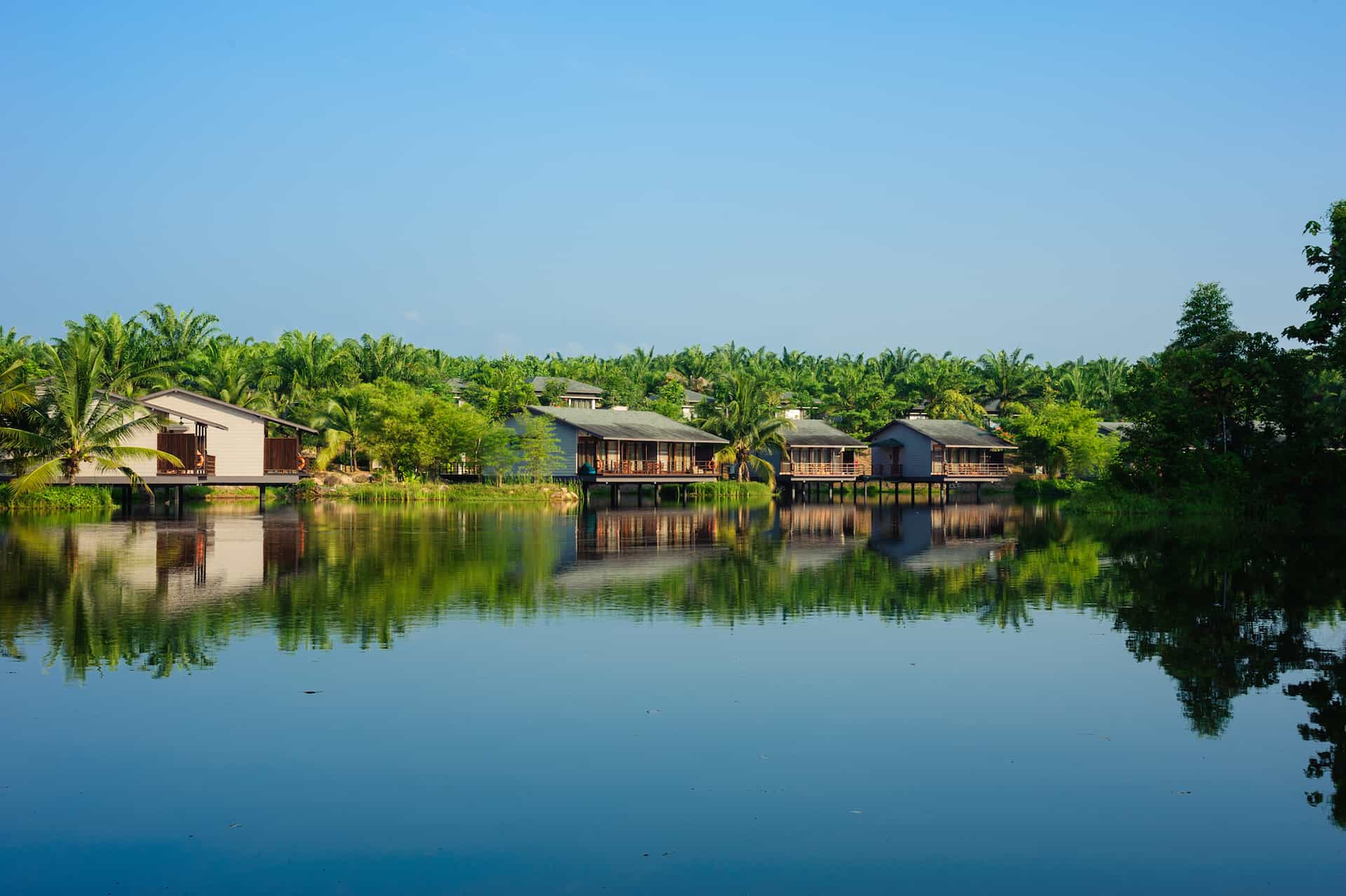 We often travel far and wide to delve into other cultures, be it exploring the temples of Japan or experiencing how people used to live in the deserts of Dubai. Yet, neighbouring Malaysia is often overlooked. The country is rich in heritage and culture drawn from the varied cultures of the different regions in Malaysia.

Singaporeans often head to Kuala Lumpur, Penang or Malacca in pursuit of a shopping- or food-fuelled weekend. The east coast of Peninsular Malaysia, however, is rarely mentioned. So when we had the chance to discover this underrated part of Malaysia with Small Luxury Hotels, we knew we had to give it a chance.

The east coast of Malaysia is known for its natural beauty and scenic views. Its coast is lined by white-sand beaches which are home to baby turtle hatchings, and its highways surrounded by palm tree plantations that stretch out far beyond what the eye can see.

First of all, SLH deserves an introduction — if you’re not already acquainted, that is. SLH represents a community of independently spirited luxury hotels and travellers in the world, boasting a portfolio of 500 luxury hotels in 80 countries. Each property under its wing has its own individual character, charm, and class. No one hotel is the same.

While we were in the east coast of Malaysia, we stayed in two of SLH’s properties, namely Tanjong Jara Resort in Terengganu and Mangala Resort & Spa in Pahang. Both resorts were unforgettable in their own right. While Mangala Resort & Spa is a design-led property with light-filled villas, the former is designed to reflect the elegance of 17th century Malay palaces, offering a genuine taste of the region’s spirit and its rich natural heritage.

A tropical haven laced with gardens of palms and fruit trees, Mangala Resort & Spa is result of an inspiring 15-year journey of rejuvenation. The property is built on what used to be an abandoned barren mining land. Right in the heart of the property, you’ll find two natural lakes left from the previous mining site.

Today, the property is home to beautiful villas nestled within a large expanse of palm plantation, exotic flower and herb gardens, fruit trees, rehabilitated lakes and undisturbed wetlands. Over 22 different types of fruits and plants are grown on the property, including mulberry, durian and red ginger. In fact, most of the produce used by the chef is grown in-house.

Mangala Resort & Spa provides a stay steeped in nature. The resort’s grounds sees over 100 species of birds, including the rare emerald dove. For a closer look at the resort’s feathered inhabitants, sign up for a nature walk guided by the resident naturalist. As we were walking around the resort, we caught a sight of the vibrant blue kingfisher flying amongst the trees, as well as a monitor lizard crossing our path.

We stayed in the Amani Pool Villa, one of the latest additions to Mangala’s luxury villas. The villa is perched on a slightly terraced land built around a small orchard of mangoes an popular Musang King durian trees. Each of these luxury contemporary semi-detached villas are fitted with a king bed, spacious bathroom with his and her sinks and an expansive bathtub, as well as a private saltwater plunge pool.

The intimate property is home to just one dining establishment, The Lakeside Restaurant. It is an inviting all-day dining restaurant offering breakfast, lunch and dinner. While the chef whips up a range of signature local and international dishes, their Malay cuisine definitely shone brighter. Try the Mee Jawa, a traditional Javanese style noodle with a tomato-based gravy and topped with yellow noodle, boiled egg, bean curd and bean sprout.

Tanjong Jara Resort, on the other hand, provides a different experience altogether. Built on a 17-hectare site facing the South China Sea, the YTL-owned secluded hideaway is a testament of Terengganu culture. Everything from the resort’s architecture to nature walks and spa services are steeped in age-old Malay traditions. This is what distinguishes Tanjong Jara Resort from other luxury resorts in Malaysia. The activities at Tanjong Jara Resort is based on the Malay philosophy of Sucimurni, which emphasises the purity of spirit, health and well-being.

In fact, the concept of Sucimurni is a recurring theme at Tanjong Jara Resort. The resort hosts regular Sucimurni retreats, a weekend course designed to disconnect you from the grind and reconnect with your body and soul. It is led by Ninie Ahmad, founder of Upward Yoga at the Sucimurni Retreat. Set against the breathtaking resort landscape, the retreat is perfect for both new yogis and established practitioners. The next Sucimurni Retreat at Tanjong Jara Resort will be happening on 11 to 13 October.

The resort’s award-winning Spa Village Tanjong Jara is a sanctuary anchored in this ancient Malay way of life, offering treatments derived from ancient rituals. These restorative treatments have been passed down from generation to generation, boasting a history of more than a thousand years. In fact, their origins are believed to be the result of the convergence of Malay, Arab, Indian and Chinese influences during the days of the Malacca Sultanate.

We started our treatment at the Spa Village with a mandi bunga (Malay Floral Bath Experience). The traditional cleansing ritual believed to carry the elements of Dynamism and Hindu-Buddhism. In fact, flowers are often used as symbols in the ancient Malay kingdom, and can be seen in the motifs of their great royal tombs. After the mandi bunga bath, we were taken to the beautiful light-filled treatment rooms for an urutan gamelan (traditional Malay massage). This deep tissue massage treatment is said to stimulate the energy points and helps to loosen and warm up the muscles while it relaxes, detoxifies and rejuvenates the body and soul. Of course, true to traditions, the aromatic body oil used in this massage is made of flowers such as jasmine and tropical magnolia, keeping the skin smooth and silky.

The highlight of anyone’s stay, however, would be the resort’s villas. In fact, the architecture of Tanjong Jara Resort, inspired by 17th century Malay palaces, has won the prestigious Aga Khan Award for Architecture. We stayed in the Serambi Sea View Room, which overlooks both the tropical landscaped gardens and the South China Sea. Furnished in local timber and rich fabric, the villa is reminiscent of the ancient kingdom’s royal palaces. Each luxury accommodation offers amenities such as comfortable bedding, a writing desk, a powered safe, a day bed, a large open en-suite bathroom with an oversized tub, separate shower and vanity units, and an outdoor verandah.

The resort hosts ocean conservation efforts which aim to protect the local endangered species, rehabilitating corals and raise awareness for sustainable seafood choices. Various wildlife such as monkeys and peacocks roam the grounds of the resort. Its crest-shaped beachfront, on the other hand, is known to be the nesting grounds of the region’s green sea turtles.

The resort has partnered up with Lang Tengah Turtle Watch, which launched a turtle hatchery right by the resort’s Nelayan restaurant. The relocated nests are protected by the hatchery’s simple wooden trellis structure which helps keep predators (such as the monitor lizards, birds, and even poachers) at bay. Visitors can choose to adopt an egg for RM$600 (S$197).

If you’re planning a visit to Malaysia’s east coast, the best months to visit are January, February, November, December and March — marked by perfect weather and calmer seas. To watch the yearly affair of turtle nesting, plan your trip around April to September.

It may come as a surprise to you that this rich and off-the-beaten track region is just a 55-minute flight from Singapore. From Sultan Ahmad Shah Airport, Mangala Resort & Spa is a 15-minute drive away, while Tanjong Jara Resort is two hours away. Both resorts provide experiences that are unique in their own way, ensuring that you’ll have an unforgettable (and culturally-rich) trip to Malaysia’s east coast.

Malaysia Small Luxury Hotels Tanjong Jara Resort kuantan mangala resort & spa
Dewi Nurjuwita
Senior Writer
Dewi Nurjuwita is a travel and design writer who can be found exploring the streets of foreign cities with passport in one hand and a cup of coffee in the other.
Travel Architecture Interior Design

You can now stay at hotels recommended by the Michelin Guide