If you love the high-octane energy of cities like Ho Chi Minh, you’ll find yourself right at home in Manila.

The city is the world’s most densely populated city with 42,857 people per square kilometre, making it twice as dense as New York City. Its roads are constantly snarling with traffic, and the blaring horns from the cars and scooters can be a real shock to the system.

Yet, there’s a lot more to Manila than just its maddening traffic and overcrowded spaces. The last couple of years saw a boom in Manila’s dining and fashion scene, complemented by a growing interest in art and indie music. Manila’s moniker, the ‘Pearl of the Orient’, is more relevant now than ever — beneath its rough shell of an exterior lies a thriving, jewel of a metropolis waiting to be discovered.

To get you going on your first foray into this eclectic city, here are some of the comfiest beds we’ve picked out for the five-star traveller.

How to get here: Take Singapore Airlines to Manila for a direct flight. Otherwise, a short stopover would be required on carriers such as Cathay Pacific, Air Asia, Korea Air and Malaysia Airlines. 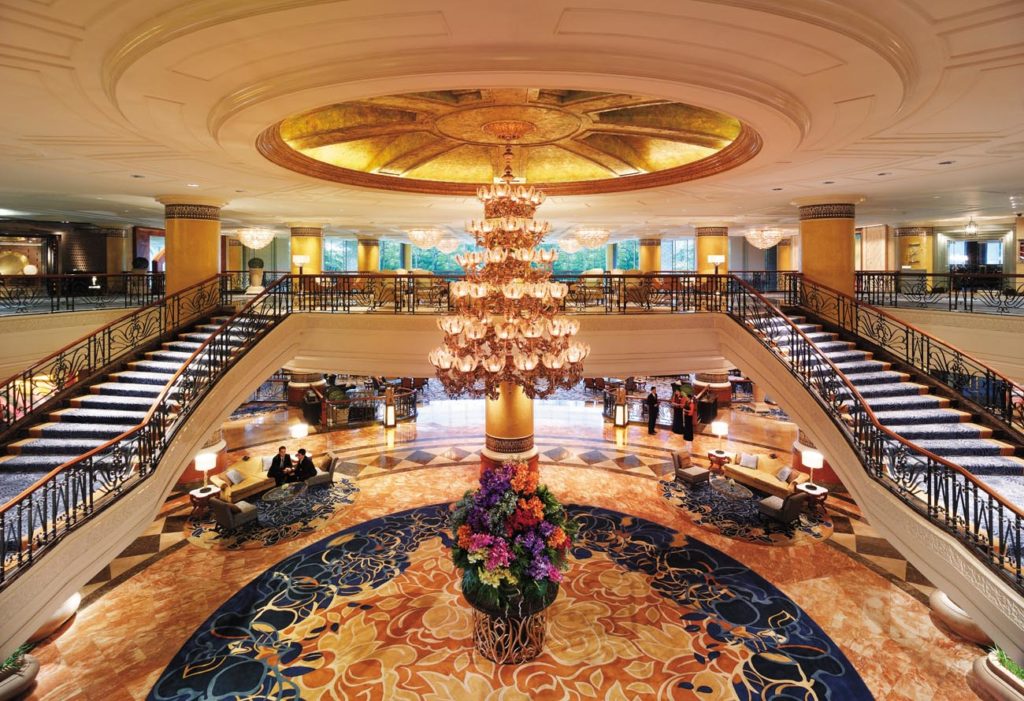 Manila is home to three outposts from Shangri-la, but Makati Shangri-la is perhaps one of the most dependable of choices for travellers since it first opened in 1993. It makes its home in the middle of Makati, minutes away from dozens of boutiques, restaurants and bars. Ninoy Aquino International Airport is also a short 25-minute drive away — if there is no traffic, that is. At first glance, the hotel may seem intimidating, with its grey concrete facade and exceptionally clean lines. That will all change once you enter. Guests will be taken aback by its grand lobby, fashioned with two dramatic staircases that lead to a mezzanine and an imposing centrepiece for an even bigger impact. Rooms in Makati Shangri-la are more modest compared to its common areas, but what it lacks in design, it makes up for in terms of space. Each of its 696 rooms are incredibly spacious, and look out to stunning views of the city. Restless guests can find themselves in at the hotel’s fourth floor, home to a palm-fringed outdoor pool, a 24-hour fitness centre and a spa. On the other side of the floor there are two tennis courts, ready for guests who want to get in on some of that infamous Manila heat. The Henry Hotel Manila is the capital city’s answer to a soulful respite in the midst of overcrowded streets. Once a compound for artists, the boutique hotel currently plays host to 34 rooms set in a quintet of homes from the 1950s. Restored hotels often only keep their facades, tearing down the original interiors and refurbishing them entirely. The Henry Hotel Manila, on the other hand, pays homage to its space: the original tile and hardwood floors have been preserved (either re-stained or refinished) and its verandas have been restored as well. Each room is fashioned with a blend of modern-vintage furnishings, with details like Eames-styled chairs and mod-light fixtures. Locally made bath products also add a personal touch to the cosy establishment. 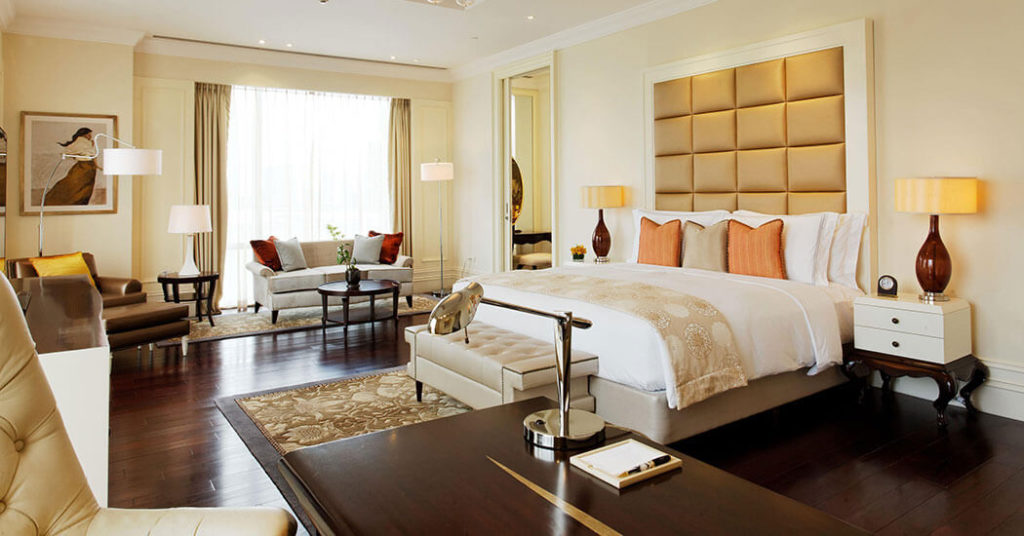 Singapore’s beloved Raffles Hotel chain has made its way to 16 other outposts all around the world, including Manila. The property is positioned within the central business district of Manila just beside Greenbelt Malls, one of Manila’s most luxurious retail destinations. The hotel chain has always been fond of injecting local flavour in their properties, and Raffles Makati is no different. Here, find more than 1600 commissioned pieces of art displayed throughout the rooms and common areas which have either been created by Filipino artists or make reference to the local area. Guests interested in the pieces can arrange for an in-house tour by the Art Concierge. Each of their elegant 32 suites are generous in size, and feel even bigger due to the clever use of high ceilings, expansive windows and airy colour palette. The hotel is also home to 237 residences for private ownership, perfect for expatriates and long-stay guests. If you’re looking for a bite or even a drink or two, head to any one of the hotel’s seven dining options to satisfy your tastebuds. The Manila Hotel, as modest as it sounds, has been the temporary home to some of the world’s most established icons, including Ernest Hemingway, Michael Jackson and The Beatles. This old-school property was built in 1909 and is deeply rooted in Manila’s culture and history as the beacon for luxury living. Today, the historic hotel is home to 570 rooms and suites, each updated with modern amenities that you can find in any five-star establishment. The rooms are teeming with old-world charm: marble tabletops and meticulously carved wooden furniture have been complemented by woven rattan chairs and touches of gold. If guests are not eating out, they can partake in any of the eight dining options throughout the day, serving a variety of menus that span cuisines from all around the world. The Peninsula Hotels group has always been synonymous with luxury, comfort and incredible service. With properties in 10 major cities, including Hong Kong, New York and Paris, Peninsula has carved a name out for itself for holding high standards in the hospitality industry, serving nothing but the best to their guests. Since its opening in 1976, Peninsula Manila has remained one of the most storied hotels in town, brimming with a charm that has captivated guests time and time again. Walk into an opulent lobby, flanked by two sweeping staircases and an incredible sunburst sculpture by Napoleon Abueva, also known as the father of modern Philippine sculpture, on its ceiling. Each of its 469 rooms are decked out in clean lines and bathed in natural sunlight, with plush beddings for guests to jump right into at night. The biggest selling point of The Peninsula Manila is the Peninsula Academy, a series of programs that ties guests with local tour guides and partners. These programs give insight into Filipino culture, cuisine and history through classes, tours and activities that are sure to keep guests entertained and well-enriched on their trip here. These include a World War II by helicopter and land as well as a two to three-hour hand-embroidery class.

Philippines Manila Hotels in Manila Hotels in Philippines
Jocelyn Tan
Writer
Jocelyn Tan is a travel and design writer. She's probably indulging in serial killer podcasts or reading one too many books on East Asian history. When she actually gets to travel, you can find her attempting to stuff her entire wardrobe into her luggage. Yes, she's a chronic over-packer.
Travel Design

LSA Curates: Baan Leelawadee lets you go from villa to beach in just a few steps