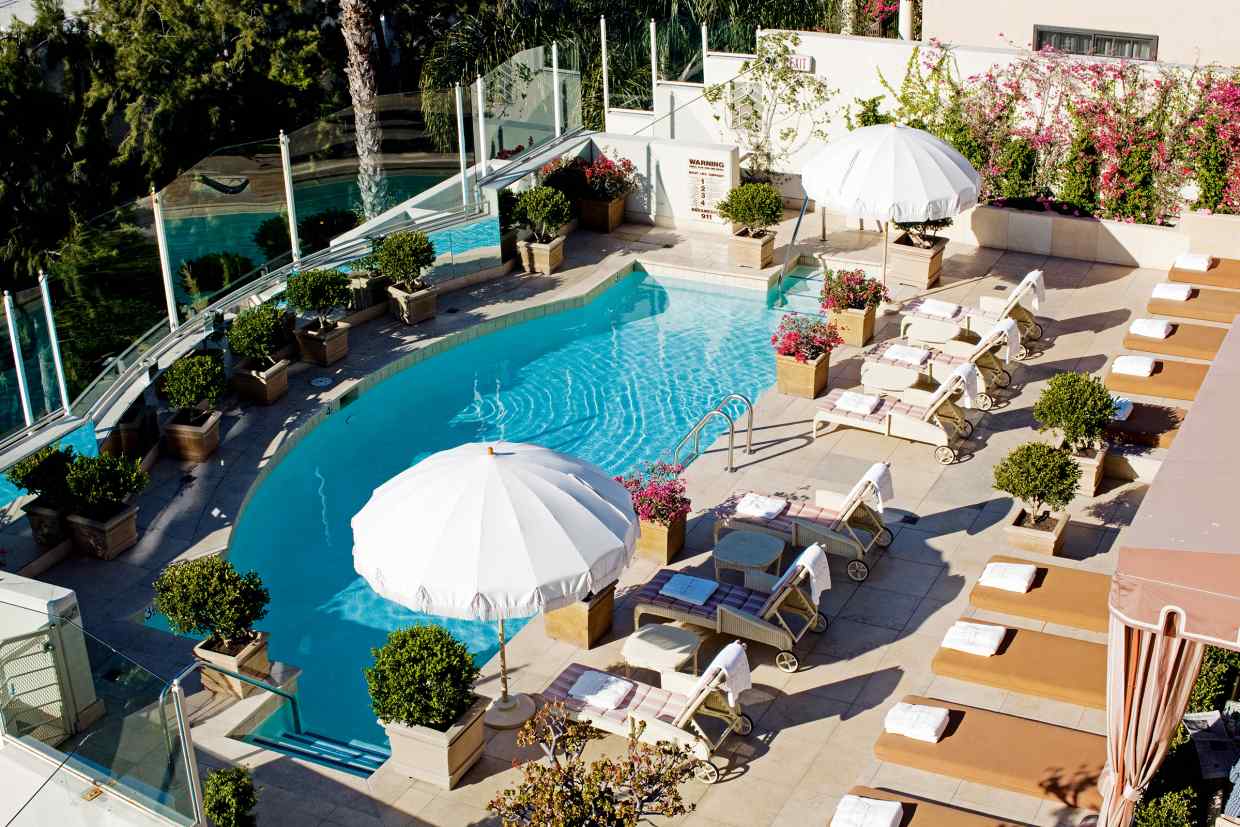 All about Sunset Tower Hotel, an Art Deco landmark once home to Hollywood’s elite

Travel
All about Sunset Tower Hotel, an Art Deco landmark once home to Hollywood’s elite
Share this article
Next article

West Hollywood (or colloquially known as WeHo), has always been overshadowed by its more glamorous counterparts Beverly Hills and Santa Monica as a destination for travellers to Los Angeles. However, it has always been the favourite haunt of the well-heeled crowd since the golden age of Hollywood — especially with it being home to Sunset Strip, a 1.5 mile stretch between North Crescent Heights Boulevard and Doheny Drive.

The Strip was an alluring playground and watering hole for the Hollywood elite, and home to some of the most iconic hotels including Chateau Marmont, Andaz West Hollywood (previously Hyatt West Hollywood), and the Sunset Tower Hotel, which was one of the first high-rise reinforced concrete buildings in California.

The building was renamed the Sunset Tower Hotel in 2004, after going through several incarnations as the infamous St. James’s Club and The Argyle. Its dramatic setting and elegant Art Deco architecture, along with its proximity to famous restaurants and nightclubs of the 1930s and 1940s, contributed to its landmark status. The building is so iconic, that An Architectural Guidebook to Los Angeles called it “as much an emblem of Hollywood as the Hollywood sign.”

The 14-storey Zigzag Moderne-style landmark has been a permanent fixture on the Sunset Strip since its completion in 1931. Originally designed as a luxury apartment hotel in 1929 by architect Leland A. Bryant, who is also the designer behind some of the most beautiful vintage apartment buildings in the city (including Hollywood’s historic Colonial House), the Sunset Tower is considered one of the finest examples of Art Deco architecture in the Los Angeles area.

“What is described to be the tallest apartment-house in Los Angeles County, rising 15 stories or 195 feet, was completed last week at Kings Road and Sunset Boulevard by W.I. Moffett, general contractor, for E.M. Fleming, owner,” the Los Angeles Times reported in August 1931 when Sunset Towers was completed at a cost of US$750,000 (S$1,021,815). The building was then added to the National Register of Historic Places in 1980.

“I am living in a very posh establishment, the Sunset Tower, which, or so the local gentry tell me, is where every scandal that ever happened, happened,” author Truman Capote wrote in a letter in 1947.

Indeed, the Sunset Tower has catered to Hollywood’s elite since its inception.  So glamorous was the hotel back in its heyday, that it drew the silver-screen clientele such as blonde bombshell Marilyn Monroe, world-renowned singer and music producer Frank Sinatra, Hollywood icon Elizabeth Taylor, and playboy film director Howard Hughes, who was rumoured to have put his girlfriends up in many of the building’s suites he rented.

Another notable personality who made the building his playground was notorious gangster Bugsy Siegel, who maintained a pied-à-terre (a temporary residence) on the ground floor. The space is now home to the hotel’s restaurant, the Tower Bar, which has all the makings of an exclusive private club — adorned with old Hollywood sepia stills on the burnished walnut-panelled walls.

The building, then the old Argyle Hotel, was in absolute despair when hotelier Jeff Klein bought it for a reported US$20 million (S$27 million) back in 2004. “It was run-down, tacky, fake Deco, but the location was always great,” Klein once said about the building in an interview with Departures magazine.

He then hired Los Angeles designer Paul Fortune, who was the man behind Marc Jacobs’ Paris apartment and now-defunct Les Deux Cafe in Hollywood, to transform the property into the luxury accommodation it is now. Its crowning glory is the storied penthouse, which features a patio overlooking a stunning vista of downtown and, on the other side, a bird’s-eye view of the Hollywood Hills. The property is also known for its world-class spa, poolside bar, and an in-house restaurant.

Fourteen years later, and the legendary hotel is making headlines again after Klein has offered to buy the remaining 80 percent stake of the hotel that was previously owned by ER Hollywood. His next move would be to renovate the hotel’s terrace and interiors of the guest rooms, but leaving the Tower Bar as it is. The refurbishment will also see the addition of a new terrace and redesign of the swimming pool and wellness areas to complement the Spa by Joanna Vargas.

old hollywood Historical hotels west hollywood sunset tower hotel Leland A. Bryant the argyle jeff klein
Dewi Nurjuwita
Senior Writer
Dewi Nurjuwita is a travel and design writer who can be found exploring the streets of foreign cities with passport in one hand and a cup of coffee in the other.
Travel Architecture Interior Design